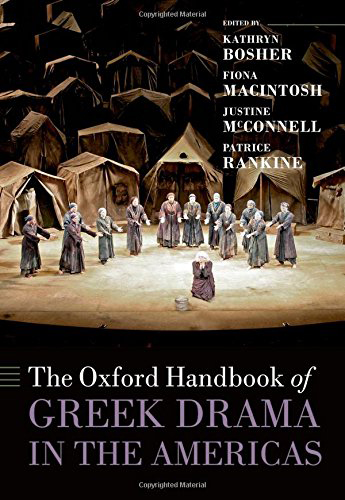 The Oxford Handbook of Greek Drama in the Americas

The Oxford Handbook of Greek Drama in the Americas is the first edited collection to discuss the performance of Greek drama across the continents and archipelagos of the Americas from the beginning of the nineteenth century to the present.

The study and interpretation of the classics have never been restricted by geographical or linguistic boundaries but, in the case of the Americas, long colonial histories have often imposed such boundaries arbitrarily. This volume tracks networks across continents and oceans and uncovers the ways in which the shared histories and practices in the performance arts in the Americas have routinely defied national boundaries.

With contributions from classicists, Latin American specialists, theatre and performance theorists, and historians, the Handbook also includes interviews with key writers, including Nobel Laureate Derek Walcott, Charles Mee, and Anne Carson, and leading theatre directors such as Peter Sellars, Carey Perloff, Hector Daniel-Levy, and Heron Coelho.This richly illustrated volume seeks to define the complex contours of the reception of Greek drama in the Americas, and to articulate how these different engagements – at local, national, or trans-continental levels, as well as across borders – have been distinct both from each other, and from those of Europe and Asia.

The book will be presented on Monday 18 May, on 5.30pm at the Outreach Room, Ioannou Centre, 66 St Giles’, Oxford.