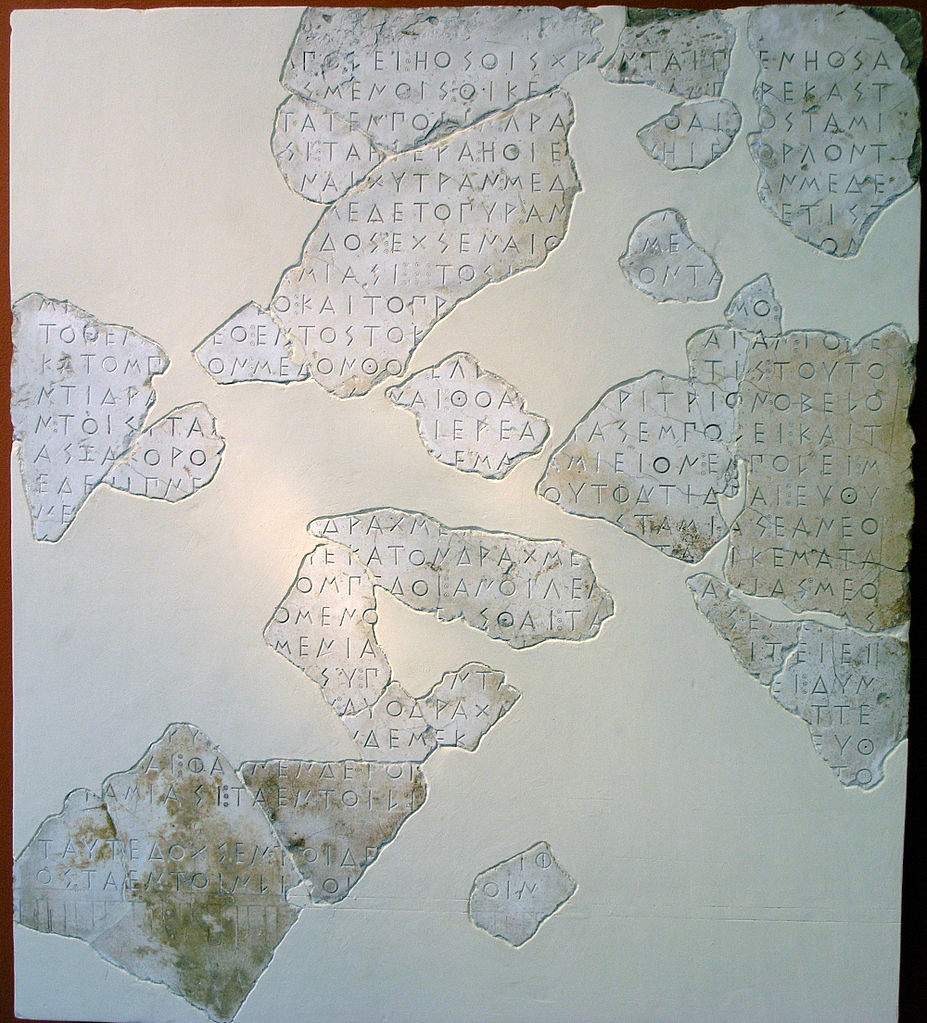 Beginning at 3.00 p.m. this afternoon, Jan-Mathieu Carbon (Copenhagen University) and Edward Harris (Durham University) will talk about Greek Cultic Associations and Greek Sacred Regulations respectively. The lectures are part of the Greek Religion Seminar series, organized by the Swedish Institute at Athens.

J.-M. Carbon’s paper, entitled “Greek Cultic Associations, Ritual Norms and Calendars” and part of the broader investigations of the Copenhagen Associations Project, “aims to reevaluate a few of the issues connected to the notion of ancient Greek ‘associations’, looking in particular at religious phenomena (le fait religieux)”. As explained in the paper’s abstract: “Most of the so called ‘private’ associations or groups which formed for the purposes of friendship and sociability, commerce or other business, or for funerary commemoration or other aims, also shared in sanctuaries, rites, or other kinds of worship. We might thus readily concede the recent scholarly argument (cf. Harland 2014: 3, following others) that the designations ‘religious association’ or ‘cultic association’ are not particularly useful ones, since Greek religion was, to a varying degree, embedded in all of the groups in question (just as, for that matter, it was deeply rooted in nearly all institutions and aspects of ancient society).”

J.-M. Carbon further refers to his approach: “As a rubric, ‘religious’ is indeed too vague and difficult to quantify; I will instead offer a new argument for the stricter application of the term ‘cultic’. This qualifier appropriately indicates that some ancient groups—a subcategory of the wider phenomenon—were formed specifically for the purposes of worshipping the gods or a definite divine figure. Indeed, ‘cult’ may be used as an apt modern tool for understanding both the formation and the behaviour of ancient associations. In English, though often pejorative, the notion suggests a small cluster of people, focussed typically on a single object of veneration, one which is traditional or distinct or new. Moreover, in ancient as in modern cases, this religious focus is to some degree independent of the institutional framework of the state (or polis). To demonstrate the validity and utility of speaking of ‘cultic associations’, I will look at three aspects of the groups in particular: first, the names of associations and what they can signal about their cultic origins and functions; second, how the principal ritual occasion of a group—a dated sacrifice—can constitute the norm and core of its existence, though its timing may also be flexible or adaptive; third and finally, the manifestly fundamental importance of such ritual norms in the inaugural acts and the dossiers of documents issued by cultic associations.” [note 1]

In his paper “Toward a Typology of Greek Sacred Regulations: A Legal Approach” Edward M. Harris points out that a major problem faced by editors of collections of “sacred law” is how to classify these rules. “Prott, Ziehen, Sokolowski, and Lupu group the inscriptions in  their collections by place, but this method combines rules of different legal statuses. Lupu also classifies rules about sacred matters by topics: sacred space, sacred officials, religious events, etc., but this encounters the same problem.”

In this paper Harris shall argue “that the best way to group rules about sacred matters is by the authority that issues and enforces them because regulations in each category have a different legal status. First, there are regulations issued for Panhellenic sanctuaries governed by international bodies such as the Delphic Amphictyony enforced by the officials of the sanctuary and the Amphictyons. Punishments may include fines for individuals and military action by member states against entire communities (the Phocians for hierosylia, the Amphissans for cultivating sacred land). Alternatively the citizens of a community may be banned from participation in festivals. The second are laws and decrees enacted by the city-state, which are enforced by the officials and courts of the polis. The punishments are those inflicted for any public offense: fines, imprisonment, exile, confiscation of property, or execution in extreme cases.”

The paper will also discuss “the possibility of grouping the laws in this category by office, by festival, and by sanctuary and the problems inherent in each method. One must also take into account laws dealing with secular matters containing religious elements (e.g. the decree about the settlement at Brea [IG i3 46, lines 15-17], which has  rules about the Panathenaea and the Dionysia). One should also distinguish  between general regulations and contracts about sacred buildings and  priesthoods, which are legal agreements but do not qualify as laws. The third are regulations enacted by sub-divisions of the city-state such as tribes and demes. These are enforced by tribal and deme officials who have the power to impose  fines. The fourth are rules prescribed and enforced by priests of sanctuaries. The relationship between these rules and the laws of the polis may be complex, but the priest has jurisdiction within his sanctuary to maintain order and punish  offenders. The fifth are by-laws of private groups such as phratries, thiasoi, orgeones, eranoi, etc. These groups are associations, whose members are linked  by the contract of koinonia. The officials of these groups have the power to fine or expel members and have ownership of the group’s property. The sixth and  final category contains rules posted by the proprietors of private shrines exercising their rights of ownership. Good examples are the rules for Xenophon’s  shrine (Anabasis 5.3.7-13) and rules about private tombs and foundations.  Regulations at any level can also be enforced by curses. Finally, one should make  a distinction between inscriptions recording regulations and ‘warning signs,’ which give a command without indicating the penalty or enforcing authority”.

The lectures will be given in English, at the Swedish Institute at Athens (Mitseon 9, Akropolis metro station)