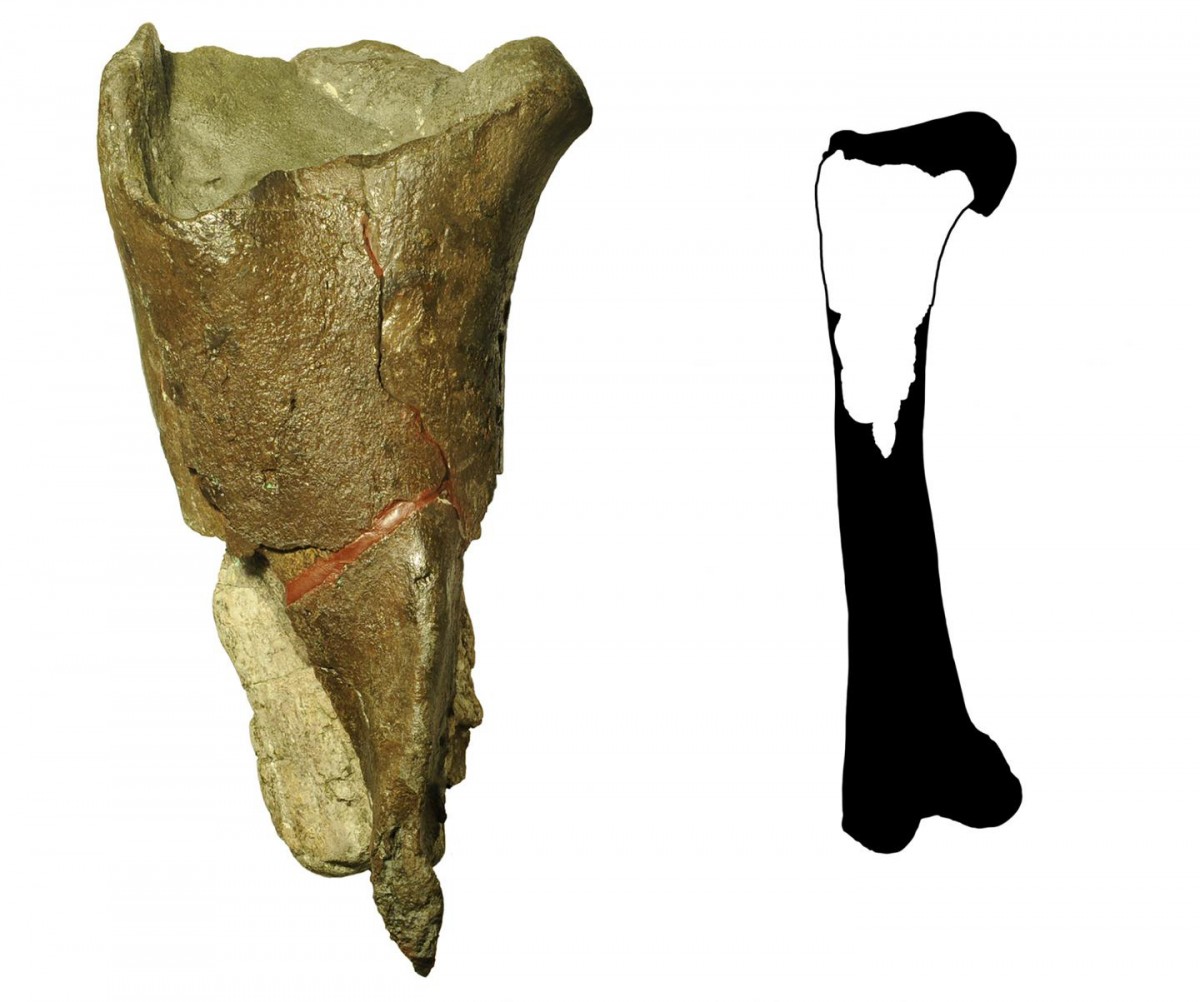 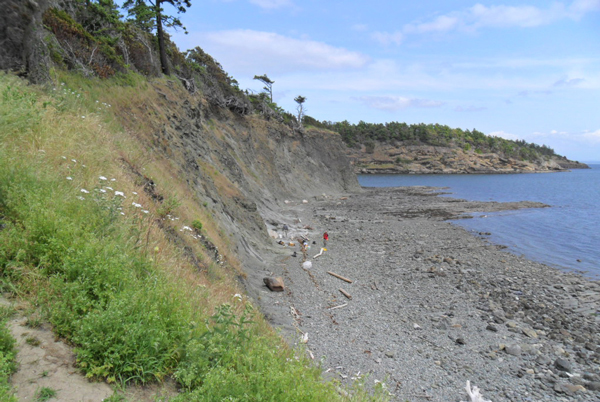 On display at the Burke Museum starting Thursday, May 21

The 80-million-year-old fossil is a partial left femur bone of a theropod dinosaur, the group of two-legged, meat-eating dinosaurs that includes Velociraptor, Tyrannosaurus rex and modern birds. It was collected by Burke Museum paleontologists along the shores of Sucia Island State Park in the San Juan Islands in May 2012 in an incredible instance of the right people being in the right place at the right time.

Burke Museum Curator of Vertebrate Paleontology Dr. Christian Sidor and University of Washington graduate student Brandon Peecook have described the find in the journal PLOS ONE. “This fossil won’t win a beauty contest,” Sidor said. “But fortunately it preserves enough anatomy that we were able to compare it to other dinosaurs and be confident of its identification.”

Burke Museum researchers discovered the fossil while collecting ammonite fossils (a creature with a spiral shell) from a marine rock unit known as the Cedar District Formation. The researchers first noticed a small section of exposed bone on the surface of the rocks, then returned with a team of paleontologists to help excavate the fossil so it could be studied at the Burke Museum.

The fossil is 16.7 inches long and 8.7 inches wide. Because the fossil is incomplete, paleontologists aren’t able to identify the exact family or species it belonged to. However, Sidor and Peecook compared the fossil to other museums’ specimens and were able to calculate that the complete femur would have been over 3 feet long — slightly smaller than T. rex. The fossil is from the Late Cretaceous period and is approximately 80 million years old.

Although incomplete, Sidor and Peecook were able to determine the femur is from a theropod dinosaur for two reasons: First, the hollow middle cavity of the bone (where marrow was present) is unique to theropods during this time period; and second, a feature on the surface of the bone (the fourth trochanter) is prominent and positioned relatively close to the hip, which is a combination of traits known only in some theropods among dinosaurs.

“The fossil record of the West Coast is very spotty when compared to the rich record of the interior of North America,” Peecook said. “This specimen, though fragmentary, gives us insight into what the West Coast was like 80 million years ago, plus it gets Washington into the dinosaur club.”

Washington is now the 37th state where dinosaurs have been found.

The accompanying fossilized clams are so well preserved that Burke paleontologists were able to identify the species, Crassatellites conradiana. These clams lived in shallow water, so it’s likely the dinosaur died near the sea, was tossed by the waves, and eventually came to rest among the clams.

Why have no dinosaurs been found in Washington state until now?

Dinosaurs are found in rocks from the time periods in which they lived (240-66 million years ago). Washington state was mostly underwater during this period, so Washington has very little exposed rock of the right age. Because dinosaurs were land animals, it is very unusual to find dinosaur fossils in marine rocks–making this fossil a rare and lucky discovery.

How did the dinosaur get to Sucia Island State Park?

Eighty million years ago, the rocks that today form Sucia Island were likely deposited farther south. How much farther south is a topic of scientific debate, with locations ranging between present-day Baja California, Mexico, and Northern California. Earthquakes and other geologic forces that constantly reshape our planet moved the rocks north to their present-day location.

Why is the fossil at the Burke Museum?

“This is a very exciting discovery,” said Lisa Lantz, stewardship manager for the Washington State Parks and Recreation Commission. “It underscores the importance of protecting natural places for the long-term benefit of the public — not only for recreation, but for important scientific research.”

When can the public see the fossil?

Washington’s first dinosaur fossil will be on display in the Burke Museum’s lobby beginning Thursday, May 21.