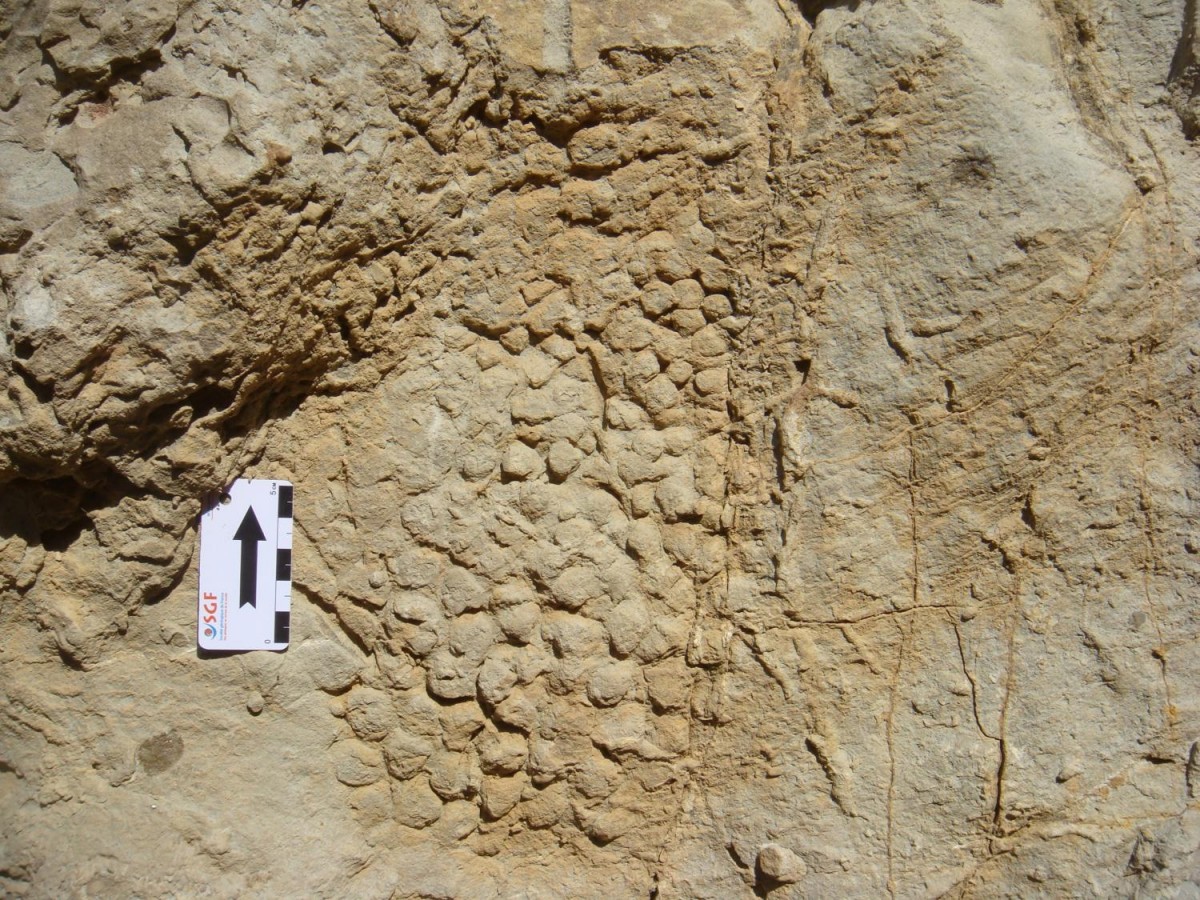 A geological research conducted in the village of Vallcebre, near Barcelona, to study the origins of rock sediments from the Late Cretaceous period (approx. 66 million years ago) has revealed an extraordinary artefact.

Researchers discovered the impression of skin scales left on a rock by a dinosaur which had lain down in the mud. During that period, the area was a muddy region corresponding to the banks of a river. As chance had it, that muddy region where the animal’s scales had left their mark later was covered with sand which, in the course of thousands of years, finally petrified to form sandstone and thus become the sedimentary rock which preserves the impression recently discovered by the researchers. The sand acted as a mould and therefore, what actually can be seen on the rock is not really the impression, but the relief of the animal’s original skin.

The characteristics of the discovery are unique, given that the Late Cretaceous period corresponds to the moment shortly before dinosaurs became extinct, there are few places on Earth containing sandstone from this period, and characterising these dinosaurs is very important in order to understand how and why they disappeared. “This is the only registry of dinosaur skin from this period in all of Europe, and it corresponds to one of the most recent specimens, closer to the extinction event, in all of the world”, highlights UAB researcher Victor Fondevilla, main author of the research. “There are very few samples of fossilised skin registered, and the only sites with similar characteristics can be found in United States and Asia”, Fondevilla states. He goes on to say: “Other dinosaur skin fossils have been found in the Iberian Peninsula, in Portugal and Asturias, but they correspond to other more distant periods”.

The shape of the scales observed on the rock show a pattern characteristic of the skin of some dinosaurs: in a form of a rose with a central bump in the shape of a polygon surrounded by five or six more bumps. But the scales are large, too large for the typical size of carnivorous dinosaurs and hadrosaurs roaming this area 66 million years ago. “The fossil probably belongs to a large herbivore sauropod, maybe a titanosaur, since we discovered footprints from the same species very close to the rock with the skin fossil” Fondevilla says.

In fact, two skin impressions were found, one measuring approximately 20 centimetres wide, and the other slightly smaller, measuring only 5 centimetres wide, separated by a 1.5 metre distance and probably made by the same animal. “The fact that they are impression fossils is evidence that the animal is from the sedimentary rock period, one of the last dinosaurs to live on the planet. When bones are discovered, dating is more complicated because they could have moved from the original sediment during all these millions of years”, Fondevilla states.

The finding verifies the excellent fossil registry of the Pyrenees in terms of dinosaurs living in Europe little before they became extinct throughout the planet. “The sites in Berguedà, Pallars Jussà, Alt Urgell and La Noguera, in Catalonia, have provided proof of five different groups of dinosaurs: titanosaurs, ankylosaurids, theropods, hadrosaurs and rhabdodontids”, explains Àngel Galobart, head of the Mesozoic research group at the ICP and director of the Museum of Conca Dellà in Isona. “The sites in the Pyrenees are very relevant from a scientific point of view, since they allow us to study the cause of their extinction in a geographic point far away from the impact of the meteorite”, Galobart explains.

The research, published in Geological Magazine, was led by Víctor Fondevilla and Oriol Oms from the UAB Department of Geology, in collaboration with Bernat Vila and Àngel Galobart, both from the Institut Català de Paleontologia Miquel Crusafont (ICP) and the Museum of Conca Dellà.