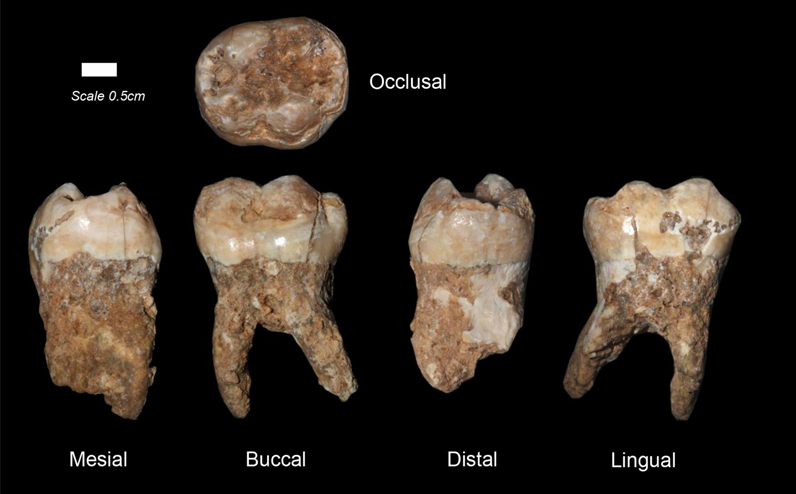 New research conducted by archaeologists from the University of York and the Universitat Autònoma de Barcelona, in collaboration with members of Tel Aviv University, reveals striking insights into the living conditions and dietary choices of those who lived during the Middle Pleistocene some 300,000 – 400,000 years ago.

The article, published in Quaternary International, describes the study in which samples of plaque were extracted from the teeth of three Lower Palaeolithic hominins who lived in Qesem Cave, Israel.

Conducting optical and chemical analyses on the plaque, which acts as a store for inhaled and ingested materials, researchers found starch granules and specific chemical compounds. This comprises the earliest direct evidence for selection and consumption of nutritional plant foods, most probably in the form of nuts or seeds.

Offering a stark contrast to the notion that an early Palaeolithic diet was based largely on meat, these results imply that ancient Palaeolithic hominins were able to sustain a diet that was not only about survival, but also enabled them to thrive and adapt. Making deliberate use of local, nutritional plant resources ensured that their diet fulfilled their physiological requirements and suggests a detailed knowledge of the local ecology.

Qesem Cave, in Israel, contains the world’s earliest secure evidence for deliberate human use of fire. Finding evidence of smoke inhalation in the dental plaque, researchers detected an early need for methods of smoke management. The study also identifies the first evidence of potential respiratory irritants and allergens, including fungal spores and pollen, while plant fibres and microwear patterns on the teeth point to chewing of raw materials and possibly oral hygiene activities such as tooth picking.

Dr Karen Hardy, ICREA Research Professor at the Universitat Autònoma de Barcelona, Honorary Research Associate at the University of York and lead author on the study, said: “Our research suggests that Lower Palaeolithic hominins were aware that a range of dietary sources must be consumed in sufficient quantity to ensure optimum survival. The development of internal hearths and successful smoke management also suggests a population that was capable of reason and adaptability.”

Professor Ran Barkai, of Tel Aviv University’s Department of Archaeology, said: “Dental calculus from human teeth of this age has never been studied before, so we had very low expectations because of the age of the plaque. However, because the cave was sealed for 200,000 years, the teeth we analysed were exceedingly well preserved. These findings are rare – there is no other similar discovery from this time period.”

Dr Stephen Buckley, Research Fellow in the Department of Archaeology at the University of York, said: “What the chemical analysis revealed was the presence of a molecular fossil, which was surprising in material of such an age. This macromolecule essentially preserved the chemical fingerprint of the biomolecules which would have formed some of the original foods consumed, allowing us to provide insights on diet which might not be evident via other means.”

Anita Radini, Graduate student in York’s BioArCh department, added: “It is important to establish the survival of lines of evidence such as these in dental calculus of this age.”

Dr Karen Hardy and her team published research on the dental calculus of Neanderthals from the El Sidrón cave in Spain in 2012, but these dated back only 49,000 years. This study is several hundreds of thousands of years earlier.

Dr Hardy added: “These results represent a significant breakthrough towards a better understanding of the lives and the challenges faced by our early Palaeolithic ancestors, and they offer a fascinating insight into their ecological knowledge and technological capabilities.”