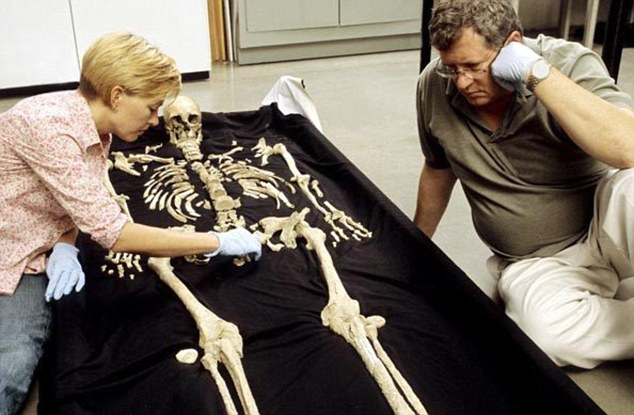 An 8,500-year-old male skeleton discovered in 1996 in Columbia River in Washington State has been the focus of a bitter dispute between Native Americans and American scientists, and even within the American scientific community. Craniometric analysis showed that Kennewick Man, as the skeleton was named, resembled populations in Japan, Polynesia or even Europe, suggesting he was not ancestral to Native Americans, a finding that helped block Native Americans’ request for a repatriation of the skeleton. A new study based on his genome sequence shows that Kennewick Man is in fact more closely related to modern Native Americans, than to any other population worldwide and, further, that the earlier craniometrics analyses cannot be supported. The study was led by the Centre for GeoGenetics at the University of Copenhagen and was published online on June 18, in Nature.

When Kennewick Man was discovered in 1996 initial cranial analysis suggested that he was a historic-period Euro-American. Later radiocarbon dating of the bones revealed an age of ca. 8,000-9,000 years BP making him pre-Columbian in age. This sparked a legal battle over the disposition of the skeletal remains. Tribes inhabiting the region where Kennewick Man was found requested the remains to be turned over to them for reburial based on him being Native American and ancestor to them. The U.S. Army Corps of Engineers, which managed the land where the skeleton was found, was prepared to do so. However, this was blocked by a lawsuit by eight scientists questioning his Native American origins and generated a scientific stir as to Kennewick Man’s ancestry and affiliation. The lawsuit lacerated the anthropological community, badly damaged relations with Native American groups, and triggered a divisive, long-running and expensive legal tug of war that ended in 2004 with a ruling in favour of a more detailed study, a study that was published in 2014.

The 2014 study included isotopic, anatomical and morphometric analysis. That study concluded that Kennewick Man resembles circumpacific populations, particularly the Japanese Ainu and Polynesians and also has certain ‘European-like morphological’ traits, and reinforced the claim that he was anatomically distinct from modern Native Americans.

However, those recent studies did not include DNA analysis, which prompted a new study of the genome sequence of Kennewick. Leader of this new study is geneticist and Lundbeck Foundation Professor Eske Willerslev from the Centre for GeoGenetics, University of Copenhagen — a centre funded by the Danish National Research Foundation. About the new results he says: ‘Comparing the genome sequence of Kennewick Man to genome wide data of contemporary human populations across the world clearly shows that Native Americans of today are his closest living relatives. Our study further shows that members of the Confederated Tribes of the Colville Reservation that belongs to the Claimant Plateau tribes of the Pacific Northwest, who originally claimed him as their ancestor, is one of the groups showing close affinities to Kennewick Man or at least to the population to which he belonged.’

And archaeologist David Meltzer from the Department of Anthropology, Southern Methodist University in Dallas, adds: ‘The trail from past to present is often poorly marked in the archaeological record, making it difficult to follow a people through time by their changing artifacts or their rarely encountered and often fragmentary skeletal remains. With the recovery and careful analysis of ancient DNA, we can better follow that trail: in Kennewick’s case, it leads unerringly to Native Americans.’

Working in an ultraclean and over-pressurized laboratory first author on the paper postdoc Morten Rasmussen from the Centre for GeoGenetics has been heavily involved with analyzing Kennewick’s bones. He says: ‘Although the exterior preservation of the skeleton was pristine, the DNA in the sample was highly degraded and dominated by DNA from soil bacteria and other environmental sources. With the little material we had available, we applied the newest methods to squeeze every piece of information out of the bone.’

About the results seen in a global context associate professor Martin Sikora from the Centre for GeoGenetics says: ‘The wealth of genomic data available for modern humans allowed us to directly test whether the Kennewick Man was more closely related to populations other than Native Americans, such as the Ainu or peoples from Polynesia. What we found instead was that he was only distantly related to those peoples, therefore clearly rejecting that hypothesis.’

However, the researchers have also been able to narrow Kennewick Man’s affiliations to modern Native Americans. Rasmus Nielsen is professor at the Department of Integrative Biology, University of California, Berkeley. On this issue he says: ‘For an 8,500 year old sample, we will probably never be able to show affiliation with any specific tribe, but we can show that the Kennewick Man is more closely related to some members of the Confederated Tribes of the Colville Reservation in the state of Washington, than to many other contemporary Native Americans.’

Rather than developing new DNA methods for analyzing the genome data the researchers chose standard and widely accepted methods for analyzing ancient DNA. One thing that always lurks in the background of this kind of work is contamination from modern DNA. Associate professor Anders Albrechtsen from the Biological Institute, University of Copenhagen, has been involved in the part of bioinformatics. About the danger of contamination in the present study he says: ‘Ancient samples have very little endogenous DNA. Therefore, we have to be extremely careful not to contaminate the samples with even the slightest amount of modern DNA. In this study we were successful in obtaining human DNA that almost exclusively was of ancient origin and we were able to show that the source of the DNA was a single individual; the Kennewick Man.’

As the earlier data from Kennewick Man had been based on cranial morphology the research group chose also to make use of this method. Professor Christoph Zollikofer and Dr. Marcia Ponce de León from the Anthropological Institute, University of Zurich are world-leading experts on cranial analyses. They did not make new measurements but re-examined the earlier data and concluded the following: ‘We started with the observation that cranial variation within human populations — both past and present — is high, and that it is typically higher than variation among populations. One important consequence of this is that, for single individuals such as Kennewick Man, cranial data do not reliably indicate population affiliations. In fact, drawing reliable inferences requires hundreds of independent features — precisely the kind of information that is now available through the new genomic analyses.’

The new study pinpoints the population origins of this heretofore highly controversial find along the banks of the Columbia River in Washington state, but comes short of naming the closest modern day relatives. Professor Eske Willerslev ends: ‘It is important to emphasize that currently it is not possible to identify which modern Native Americans are most closely related to Kennewick Man, since our comparative DNA database is limited, particularly for Native American groups in the United States. However, among the groups for which we have sufficient genetic data, we find that the Confederated Tribes of the Colville Reservation to be one of the groups showing close affinities to Kennewick Man or at least to the population to which he belonged. Additional modern descendants could be identified as more Native American groups are sequenced.

The paper The Ancestry and Affiliation of Kennewick Man is published in the journal Nature on Thursday 18. June 2015.