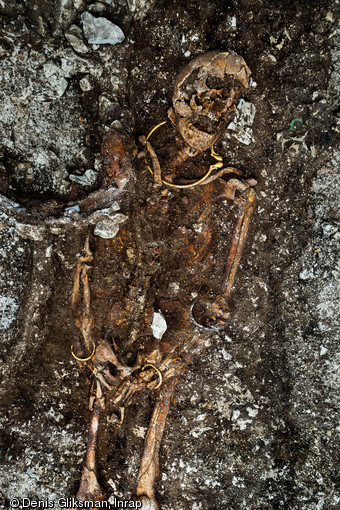 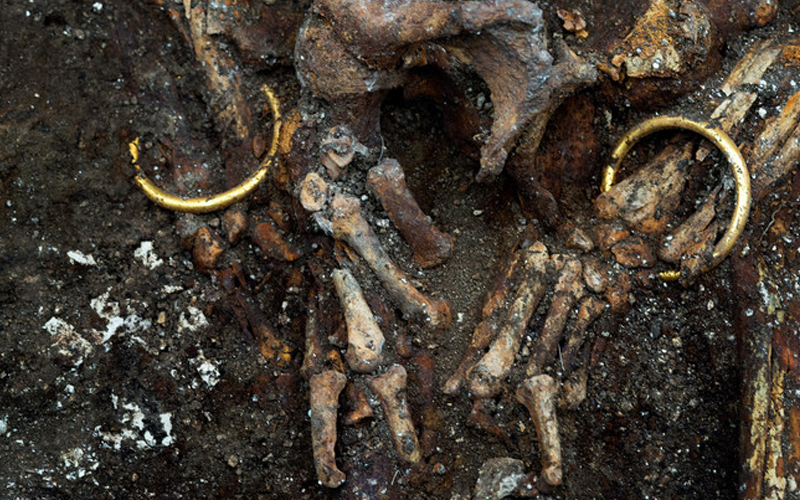 Laid to rest with a gold torque

The aristocratic tomb of Lavau

INRAP archaeologists excavating the aristocratic tomb of Lavau dated it to the beginning of the 5th century BC. The tomb contains exceptional grave goods: a Mediterranean bronze cauldron decorated with lion heads and the river god Acheloos, an Attic black-figure oinochoe, a cist, bronze basins etc. As part of National Archaeology Days (19-21 June 2015), INRAP presents the latest results of the completed excavation.

Laid to rest with a gold torque

Lying at the center of the tomb, the archaeologists have found an individual laid to rest with a chariot. The head of the deceased lies to the south. The prince or princes is adorned with a heavy golden torque (580 grammes), two gold bracelets and a lignite cuff. The jewelry bears similarities with that of the tomb of Reinheim (Germany).

The poor state of preservation of the bones makes it difficult to determine the sex of the deceased. The 5th century coincides with the end of the Hallstatt period and the beginning of La Tène, when several princess graves have been found in the northeastern quarter of France, including that of Vix.