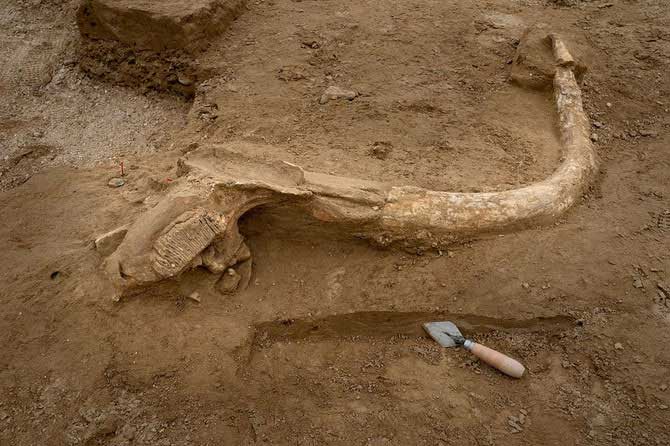 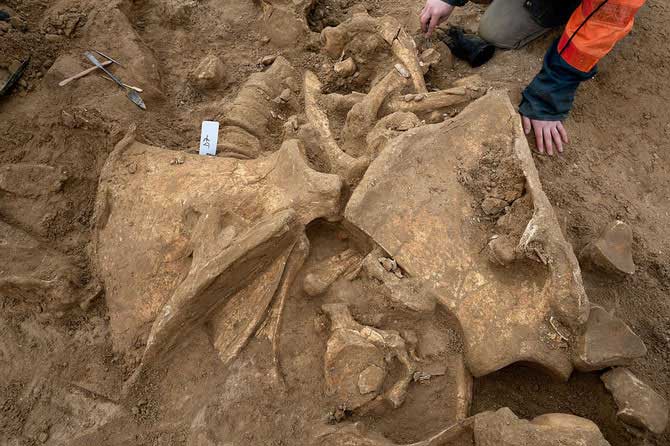 Speculations about cause of death

“What we have found here is a moment in pre-history in an absolutely extraordinary state of preservation,” said Pascal Depaepe, technical director of the French national institute for preventative archeology, INRAP. “It is my belief that the mammoth was butchered by Neanderthals on this spot. Whether the animal was hunted down by them, or found dead some time later, we may never be able to tell. The concept of rotten meat is, after all, a relatively modern idea.”

A nearly complete mammoth skeleton has been found in a gravel pit on the banks of the Marne, 30 miles north-east of Paris. The discovery was made in July, but kept secret until this week.

It is an exceptional type of discovery in France, since only three specimens have been found in 150 years. At first, archaeologists speculated that the mammoth died between 130,00 and 190,000 years ago, trapped in the mud. Now, two tiny fragment of flint blade found in the mammoth’s skull, close to one of its tusks led the archaeologists to think it might have been attacked by Neanderthals.

The mammoth of Changis-sur-Marne is probably Mammuthus primigenius. These specimens could reach 2,8-3,4 metres high, and were covered with fur and a thick layer of fat. “Helmut le Mammouth” lived between 200,000 and 50,000 years ago, at the same time as the Neanderthals.

During the cold, dry period between two Ice Ages, Neanderthals wandered over the European tundra looking for food – one of these groups must have at least feasted on the mammoth’s carcass, some time after its death.

Humans and mammoths have been found together at only two Middle Palaeolithic sites in western Europe, both in Germany.

In the next few days, the remains of the mammoth will be removed from the gravel pit, as its bones could be damaged by exposure to the elements. Then archaeologists and palaeontologists will try to answer how the animal died, whether it was killed by Neanderthals or scavenged by them after its natural death. This discovery will also shed light to the predatory skills of Neanderthals.

After the mammoth has been examined, archaeologists hope to reassemble and display Henry at the museum in Paris.