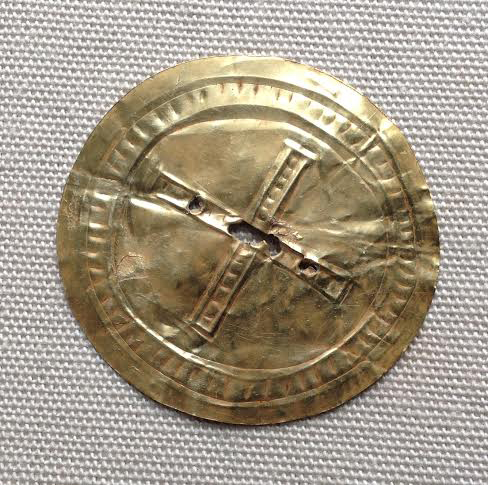 For the first time

An early Bronze Age sun disc from Monkton Farleigh in Wiltshire has gone on display for the first time in Wiltshire Museum. This is one of only 6 finds of sun discs discovered and is one of the earliest metal objects found in Britain. It was made in about 2,400 BC, soon after the sarsen stones were put up at Stonehenge, and is thought to represent the sun.

The sun-disc was found in a burial mound at Monkton Farleigh, just over 20 miles from Stonehenge. It was found in 1947 in excavations by Guy Underwood along with a pottery beaker, flint arrowheads and fragments of the skeleton of an adult male. It was kept safe by the landowner since its discovery and has only now been given to the Museum. It has now been cleaned by the Wiltshire Council Conservation Service and has been placed on display in time for this year’s mid-summer solstice.

The sun disk is a thin embossed sheet of gold with a cross at the centre, surrounded by a circle. Between the lines of both the cross and the circle are fine dots which glint in sunlight. The disc is pierced by two holes that may have been used to sew the disc to a piece of clothing or a head-dress, and may have been used in pairs. Until recently it has been thought that early Bronze Age gold may have come from Ireland, but a new scientific technique developed at Southampton University is hinting that the gold may have come from Cornwall.

Museum Director David Dawson said “We have the best Bronze Age collections in Britain and we are delighted to be able to display this incredibly rare sun disk through the generosity of the donors. It was kept safe since its discovery by Dr Denis Whitehead and the first time that it had been seen by archaeologists was when he brought it to show me at the launch of our new Prehistory Galleries in 2013. It has now been presented to the Museum in remembrance of Denis S Whitehead of Inwoods, Farleigh Wick.”