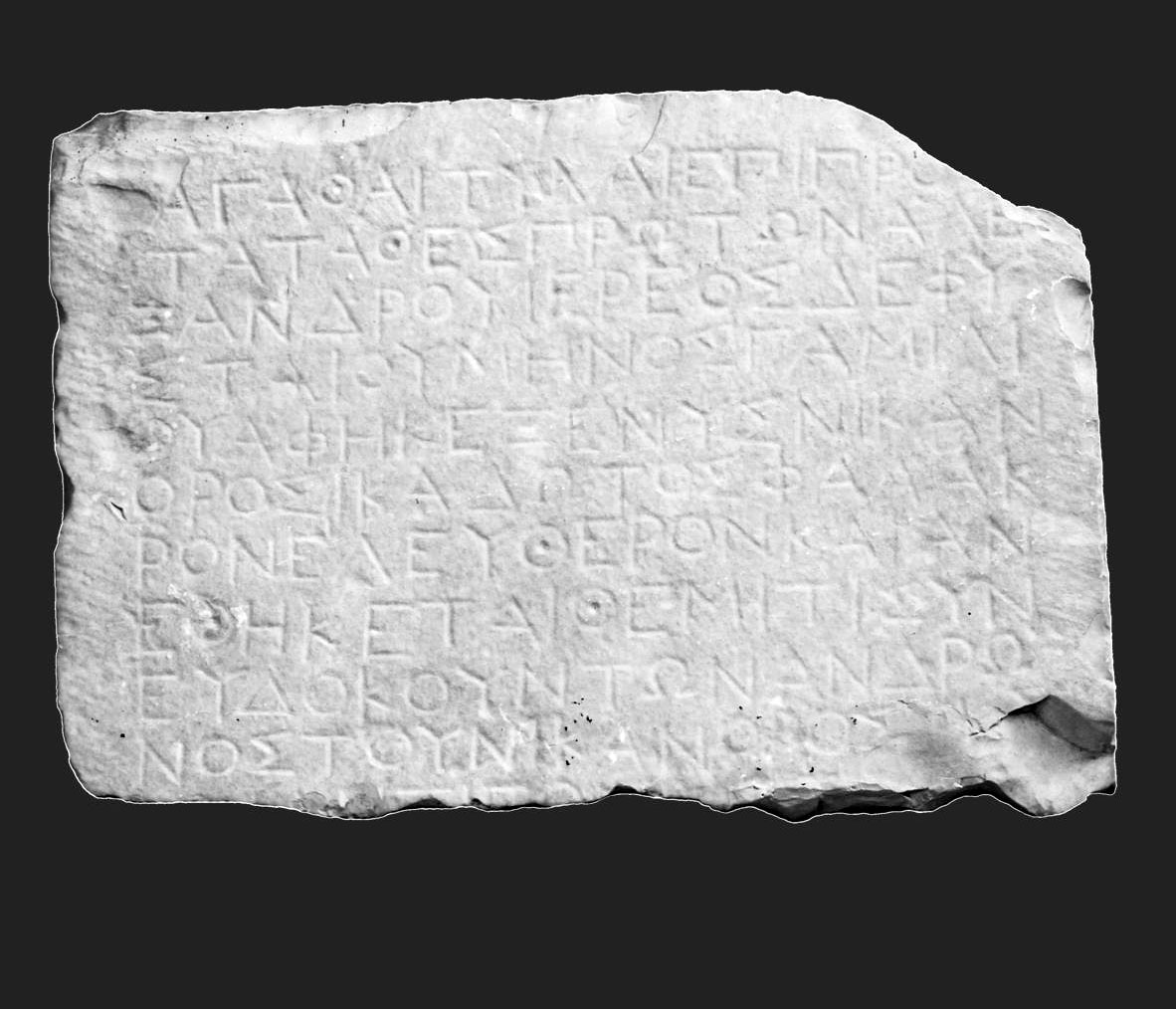 The freeing of the slave Falakros from his master Xenys, son of Nikanor…

A manumission inscription of the 4th c. BC

A new digital action, under the title “The exhibit of the month. Short stories of history…” is hosted on the webpage of the Archaeological Museum of Igoumenitsa. Each year will be dedicated to a selected digital thematic unit comprising twelve different exhibits or groups of exhibits, which will be presented gradually during the year, one for each month. This year’s subject is writing. The action aims at a different approach of the selected objects since these will be presented under thematic groups different from those of the Museum’s Permanent Exhibition, while focusing on details that may escape the visitor’s attention. At the same time, selected finds -relevant to each thematic unit- which are kept in the museum’s storerooms will be presented to the public.

This month’s selected exhibit is a manumission inscription on a stone stele which was found in 1960 in the area of Goumani (ancient Gitana) and is dated in the mid 4th c. BC.

The manumission inscription refers to the freeing of the slave Falakros from his master Xenys, son of Nikanor. The manumission took place in the month Gamilios, in the year when prostates of the Thesprotian League was Alexandros whereas the priest of the goddess Themis -to whom the slave was dedicated – was Fystaios. The act took place with the approval of Andron, son of Nikanor, which was probably the brother of Xenys.

In ancient Greece, slaves were set free by their masters out of compassion, for political expediency, military reasons etc. In most cases, especially in the Hellenistic period, manumission had a sacral nature, since the slaves were emancipated under the supervision of the gods, they were dedicated or, even, ‘sold’ to them.

The finding spot of the inscription led to look for the city that constituted the centre of the League of the Thesprotians in the surrounding area, providing us with a further element for the identification of the ancient fortified settlement at Goumani with ancient Gitana. We know, moreover, from the written sources [Livius 42.38.1] that in the early 2nd c. BC Gitana functioned as a place of political assemblies of the Epirote League.

As evidenced by the inscription, head of the Lead of the Thesprotians was a prostates (literally meaning “protector”) an office similar to that of the eponymous archon. From the inscription it the cult of Themis at Gitana can also be confirmed. The reference to the name of the prostates and of the priest of Themis was a chronological reminder of the manumission act.

Regarding the names, some (Xenys, Falakros, Alexander, Andron, Nikanor) are also known from inscriptions found in the wider region, such as Dodona, southern Illyria, Corfu. An exception is the priest’s name (Fystaios), which is first attested in this inscription, as well as the national Ikadotos that refers to the origin of Xenys, the owner of the slave. It should be noted that the name of the slave (Falakros) is Greek. Interesting enough is the reference to the month Gamilios, from which it is confirmed that in Epirus, as also in southern Illyria and Corfu, they had adopted the Corinthian calendar, or a variant of it, under the influence of the colonies. In this calendar, as shown by recent studies of the Antikythera Mechanism, Gamilios was the ninth month of the year which began in early autumn.

The incribed stele is exhibited in Hall 2 of the Museum (Unit 3: Public life).