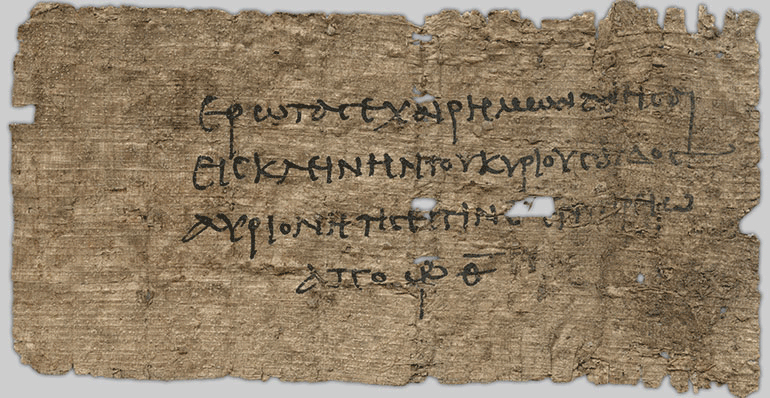 Window on a lost world

A reminder for a dinner invitation and a touching letter from a young man to his mother offer a rare glimpse of daily life in ancient Egypt, thanks to a recent rediscovery at University of British Columbia Library.

It’s believed that the small papyrus scraps, which fit in the palm of an adult hand, are the first of their kind in Western Canada. Both were excavated in Egypt, and made their way to UBC in the 1930s via the University of Michigan.

“Together, they reveal intimate details of life in Roman Egypt,” said Toph Marshall, a professor at UBC’s Department of Classical, Near Eastern and Religious Studies (CNERS). “These documents are a window on a lost world, revealing the daily activities of ordinary people.”

The invitation, similar to a calling or visiting card from Victorian England, summons guests “to dine at the couch of the lord Sarapis.” Meanwhile, the young man’s letter wishes his mother good health; he writes that he thinks of her daily and asks her to visit soon.

The letter is also notable due to some creative handiwork. Parts of it were cut and rearranged in the early 20th century to make it more appealing to the modern sensibilities of antiquities buyers.

The scraps consist of material from the papyrus plant, a reed used to produce the ancient equivalent of paper. They are written in Greek, and date back to Roman-age Egypt about 1,800 years ago.

The pieces have been stored at UBC Library’s Rare Books and Special Collections (RBSC) since the 1930s. However, they were minimally catalogued and remained largely unnoticed as other collections, donations and projects took precedence.

From Stone to Screen

That all changed in 2014, when Chelsea Gardner – a PhD student in classics at UBC – approached RBSC in order to obtain some Babylonian clay tablets for a digitization project entitled “From Stone to Screen.”

An RBSC librarian who was aware of the papyri thought they might also be of interest, so she brought them to Gardner’s attention. It was a serendipitous moment; Gardner alerted Marshall about the items, who was thrilled to learn of their existence.

Marshall and his colleagues have since written a paper on the papyri and submitted it for publication. Marshall is also hoping to use the items as a teaching tool for workshops and classroom sessions on papyrology and palaeography.

In addition, the Library has digitized the papyri. While these are the only samples of their kind at RBSC, there may be further additions. “We would love to develop a teaching collection of Egyptology material similar to our medieval manuscript collection,” said Katherine Kalsbeek, acting head of RBSC.

NOTES
1. The University of British Columbia