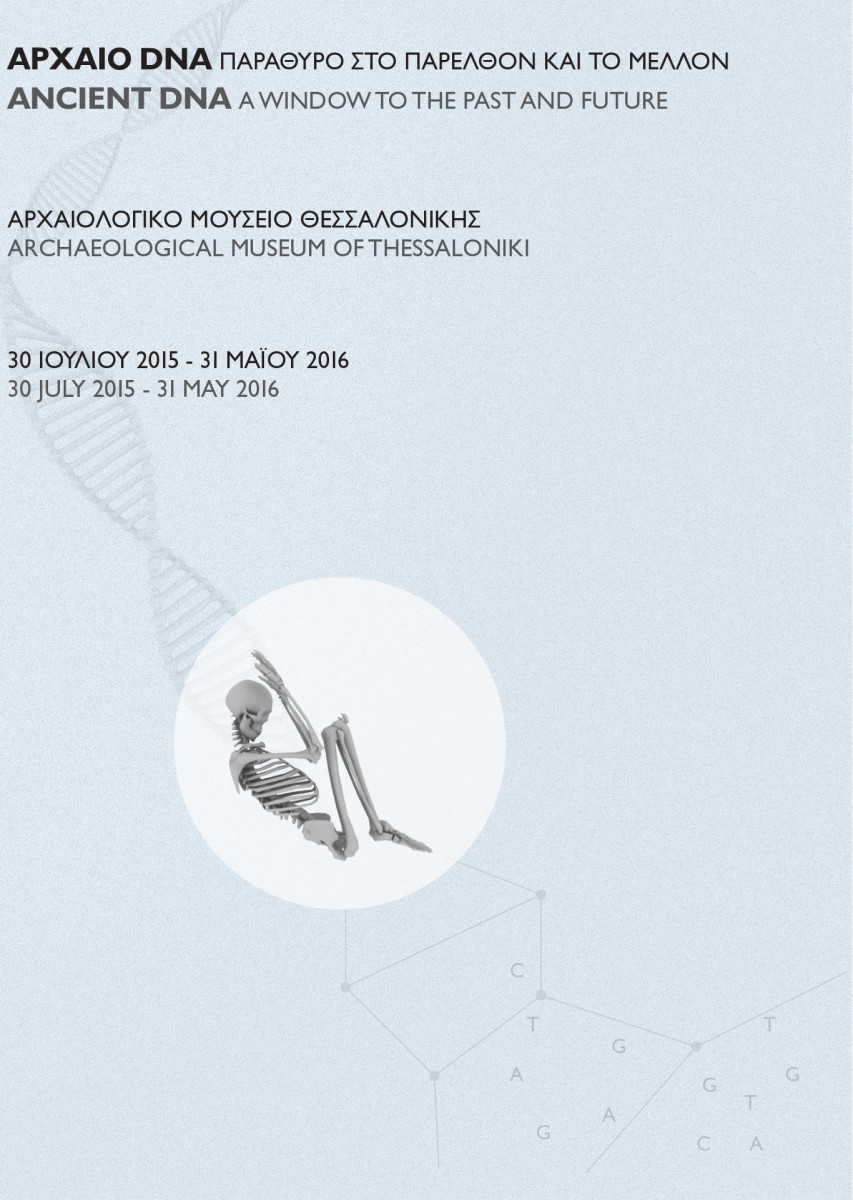 Ancient DNA: A window to the past and future

How close relatives are the Neanderthals to us? What eye, hair and skin had out ancestors? What pathogenic organisms were first associated with mankind? Has ancient DNA been analysed in Greece yet?

The exhibition “Ancient DNA: a window to the past and future” in the Archaeological Museum of Thessaloniki will open on July 30, 2015 and run through May 31, 2016.

What is ancient DNA?

Most of us are familiar with the term DNA and what it means with regards to the basic functions of our organism, such as structure and appearance. However, what is ancient DNA?

Ancient DNA is every portion of DNA that can be acquired from deceased organisms (skeletons, mummies, residues of prehistoric or extinct animals). Through complicated and time consuming laboratory analysis the biological history of ancient and contemporaneous populations of people and animals is recomposed and narrated.

The exhibition “Ancient DNA: a window to the past and future” introduces the visitor, using simple explanations which are also scientifically complete and accurate, to the study and results of ancient DNA.

It is comprised of three parts:

1. In the first part of the exhibition the visitor is introduced to the understanding of DNA and becomes acquainted with the research.

2. In the second part the methodology of sampling described, the laboratory procedures for the extraction, amplification and sequencing of DNA as well as the processing of the data are followed.

3. In the third and final part some of the palaeogenetic results in anthropology and archaeology are presented.

After just 31 years of the existence of this research we can:

-Understand the genetic relationship of modern humans (Homo sapiens sapiens) to missing species of the genus Homo, such as Neanderthals

-Study the functioning of our bodies and how this has affected our eating habits over time (e.g. lactose intolerance)

-Determine the degree of relatedness between two or more ancient skeletons

-Certify the existence of pathologies in ancient skeletons in order to reconstruct historic health and to study the temporal evolution of pathogenic disease.

In this way we can reconstruct a true biography of prehistoric people!

Do we have results of ancient DNA from Greece?

In addition to the international and European examples of the genetic evolution of humans presented here, we also have the first results from ancient DNA analysis carried out on osteological material from Greece.

A very important recent finding is the recovery of entire genomes from three prehistoric farmers who lived in Northern Greece in the period between 7,500 and 5,500 thousand years ago. This data has been analysed and will certainly shed light on the ancestral relationships of the first Europeans and will also provide a variety of information related to their functional and morphological characteristics. We already know that some of our Neolithic ancestors could not digest milk, as they were lactose intolerant, and had brown eyes and dark skin.

What will the visitors to the exhibition take away from it?

Coming to the exhibition the visitor will understand the scientific and investigative work that lies behind the research into ancient DNA and comprehend the evolution of their biological history. It will thus open the eyes of their soul to this bright window of science that links the past with the future by passing through the present!

On July 30, 2015, a workshop will take place in the Museum, about the use of ancient DNA in archaeology. The workshop is open to the public.