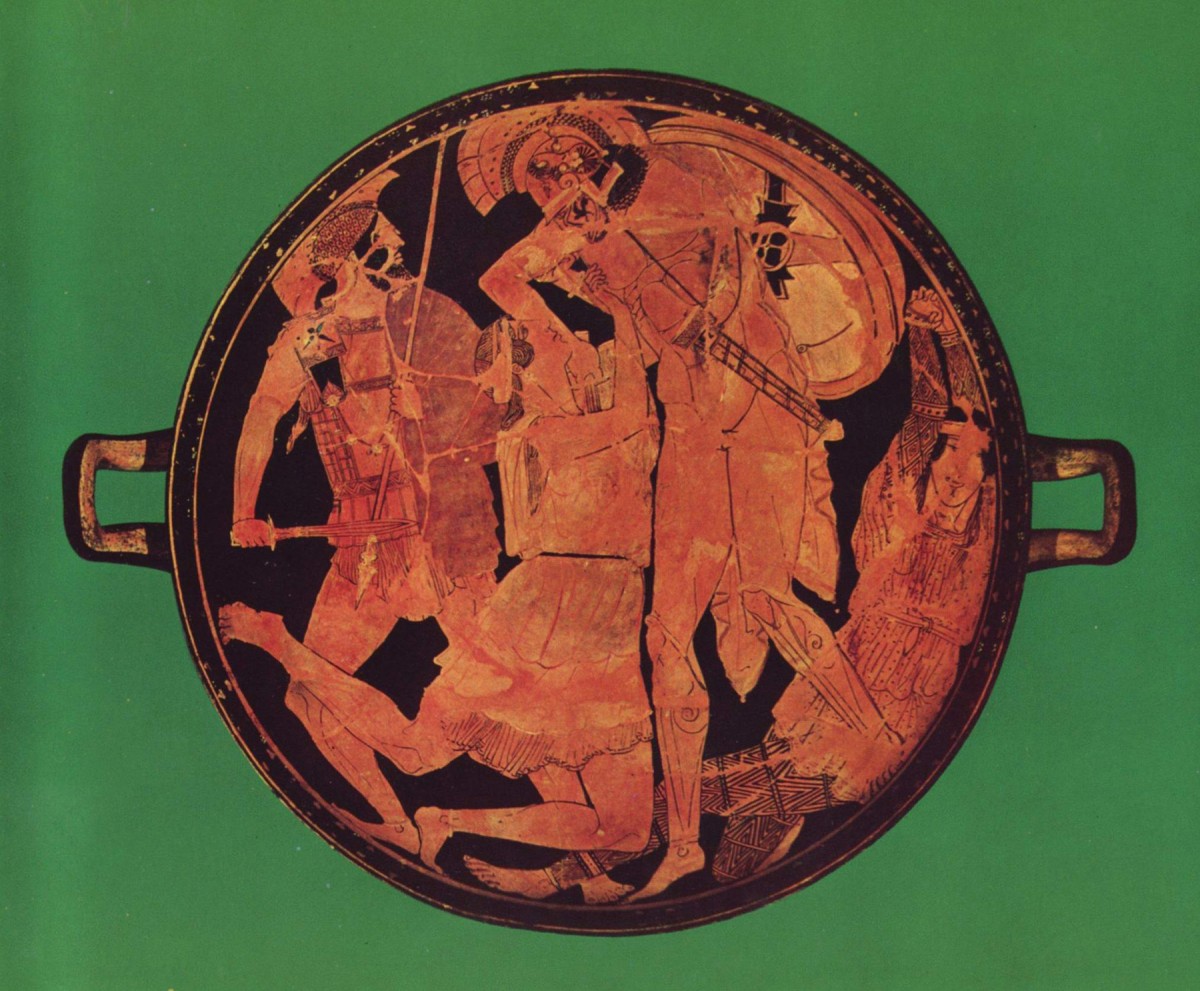 Over a Hot Stove: Women in the Kitchen (Day 1)

On Saturday, July 25 and Sunday, July 26, 2015, the 3rd Symposium of Greek Gastronomy will take place in Karanou, Chania, Greece. Its title is “Over a Hot Stove: Women in the Kitchen”.

On Saturday, Dr. Archaeologist Kleanthi Pateraki will address the topic “Amazons, the ‘different’ women: what did they cook, eat and why?”. Phd Archaeologist Alexandra Neagu will then present her paper “Women as extraordinary cooks in Ancient Greek literature”, followed by Vassileios Tritakis (Medical Doctor) who will introduce the audience to the secrets of garlic and “agnos”, the sacred plant of Hera.

Day 1 of the Symposium will close with a lecture entitled “Paphian culinary traditions in Late Hellenistic period” by Kamila Nocoń (PhD Candidate, Archaeologist).

“Amazons, the ‘different’ women: what did they cook, eat and why?” by Kleanthi (Cleo) Pateraki

In the oral presentation the case of the Amazons, the “different”, not “normal” women will be examined. Firstly, the etymology of the word “Amazon” will be investigated as it is presented in the ancient sources, as explained in ancient Greek, as interpreted in other ancient languages, but also as explained by modern researchers.

Then the existence of such representations in ancient art will be searched. Is the iconography of the Amazons who eat or cook preserved? The ultimate goal is to draw conclusions for the eating habits, the cooking skills and the overall “gastronomic identity” of the Amazons.

Although cooking has been regarded as a basic feminine domestic labour, with male labour exercised in the public space, there is little literary mention of the activities of Ancient Greek women in the kitchen. As a consequence, the question of the presence of women at symposia or at private meals has been widely debated within the gender studies field, with scholars such as John Wilkins of Andrew Dalby arguing that women did not eat along with men, although they cooked meals. However this perspective has not adequately addressed the issue of the absence of women as cooks in ancient Greek literature. My paper addresses the portrayal of women as extraordinary chefs, with special attention to their skills resulting in the corruption of the principle of sharing of the food or of the purpose of cooking altogether. Thus, I will examine the examples of Medea  in Simonides and of Praxagora in Aristophane’s Ecclesiazusae, to highlight how they corrupt a process that not only concerns the culinary but also the social and the political realms. In other words, I will discuss the political concerns of cooking and how it can be used as a means of unsettling gender and social status determined hierarchies. I argue that the absence of women engaged in culinary activities in Greek ancient literature and their occasional portrayal in an association of cooking with magic is to be regarded as a sign of the need of male control over the sensitive and critical domain of the daily life which is food. In conclusion, by closely examining the interference between gender and cooking, my paper sheds new light on the rarely acknowledged issue of women as both nurturing and disturbing culinary agents in Ancient Greece.

A Greek tribe in the Western Himalayas – in Malana region at an altitude of 3200 meters uses skorodon (garlic) on pessoi (vaginal pessaries with a base of  sheep’s wool) to protect the vagina, for female contraception (in combination with other herbs) and  gynecological hygiene. Medical Doctor Vasileios Tritakis  traveled to the Himalayas in 1990, studying Greek tribes and their medical traditions wanting to rediscover the lost knowledge, the legacy we have left as Greeks to the Asians, the then famous “Greek Medicine” that always followed the Great Greek Campaign of Alexander the Great  in India and as far as  the Great Ocean … (currently the Hindus River). The groups of warriors who had been appointed by Alexander the Great as garrisons at important passes in Paropamisos and the Himalayas today are tribes worth noticing,  with very specific characteristics – and very different habits and languages ​​- from the native indigenous tribes. Usually the Greeks who were left as guards had a solid knowledge of the ancient Greek medicine and the natives from the surrounding areas (Indians and other tribes) sought mainly medical assistance from them.

The Greek tribe in Malana – Himalayas (Himachal Pradesh) have some special features that make them stand out from the other inhabitants of the area: the men sit having a rest and the women do everything…! Where does the habit come from: the warriors return from the battle and need to rest, sleep and be treated (nowadays they spin wool and weave their clothes on the loom) and women seem to do all the chores in the village. The visitor who approaches the inaccessible village is considered unclean (and potentially dangerous) while he/she is prohibited from touching certain sacred stones, must walk only on designated paths and is not allowed to approach the three springs of the village. There is no vehicular road leading to the village – only difficult and dangerous paths, while in some places if some planks – like small foot bridges are removed- the village becomes inaccessible to the outside world as a way of defense!

“‘Agnos’ the sacred plant of the goddess Hera”, by Vassileios Tritakis

Agnos (according to Dioscorides) is a very useful herb that usually grows on the banks of rivers and dry river beds. In the West it is called: Vitex Agnus Castus (Vitex =  weave baskets) (Agnus Castus = Pure Lamb, and by English: Chastity ~ Castus).

“Virginity” was associated in ancient Greece primarily with the Goddess Hestia as well as Artemis, while for the  married and mature women with the Goddess Hera (intertwined with the seriousness and the inner  wisdom of the responsible and devoted mature housewife). In the ancient tradition Goddess Hera was born in Samos under an Agnos tree (where there is now the temple Heraion!).  We meet all three goddesses in the Agnos tree…!

The ancient Greeks –the ordinary people and peasants- believed the basket willow-Agnos reduced sexual desire. Pedanius Dioscorides writes that: women soldiers gone to battle drank daily a decoction of Agnos to keep them “chaste”…! Also later, during the Roman occupation (this knowledge passed from the Greeks to the Romans) when the wives of Roman soldiers did the same using Agnos. They even scattered branches of this bush around their home in order to reduce their sexual desire – but also highlight in public … what they were trying to do.

In Thesmophoria, a big important festival that only women participated, dedicated to the Goddess Demeter and the Institutions that she suggested to people – as laws and regulations of a refined and virtuous life! (Falling about every October – November) women who took part had to go through several purification steps with the expected cleansing preparations. One such purification practice for them was to sleep on mattresses of large Agnos twigs placed near the statue of goddess Demeter, because they believed that the plant had the power to suppress the natural sexual desire and help menstruation!!! (The strict requirement was: all women were to refrain from all forms of contact and communication with their husbands.)

In the Middle Ages in the numerous Christian monasteries throughout Europe, the monks were adding to their meals seeds of Agnos  (Monk’s pepper), in order to appease their sexual desire – which had been seeded by the devil … It is also said that they often used flagellation with branches of Agnos.

From the rod of our disciplinarian teacher (which was made from Agnos twig for it had a nice smell …) to the current use of Agnus Castus as a medicinal, aromatic and beekeepers plant,  used until recently in basketry, its essential oil is a biocide with progesterone Properties, while its flowering shoots are insecticidal.

The aim of the poster is to present a traditions in cooking in Late Hellenistic Nea Paphos in Cyprus. Since the 2011 the Jagiellonian University conduct an excavation in the heart of this ancient city, the Agora. Vessels related to preparing food have been unearthed  in huge amount in the material culture from Nea Paphos That pottery assemblage will help us to better understanding the  cooking traditions in the city. I would like briefly examine the changes of the Paphian cooking traditions based on the analysis of cooking pottery assemblage from Paphian Agora from late Hellenistic period.