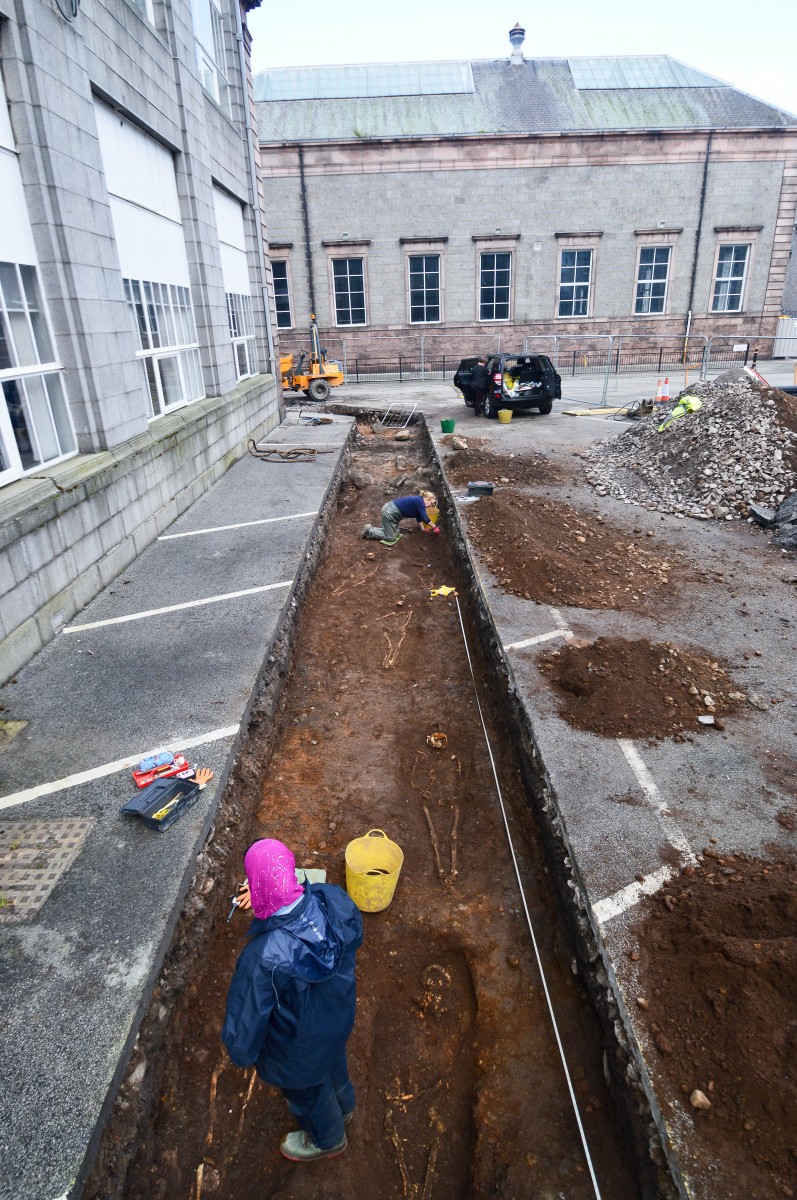 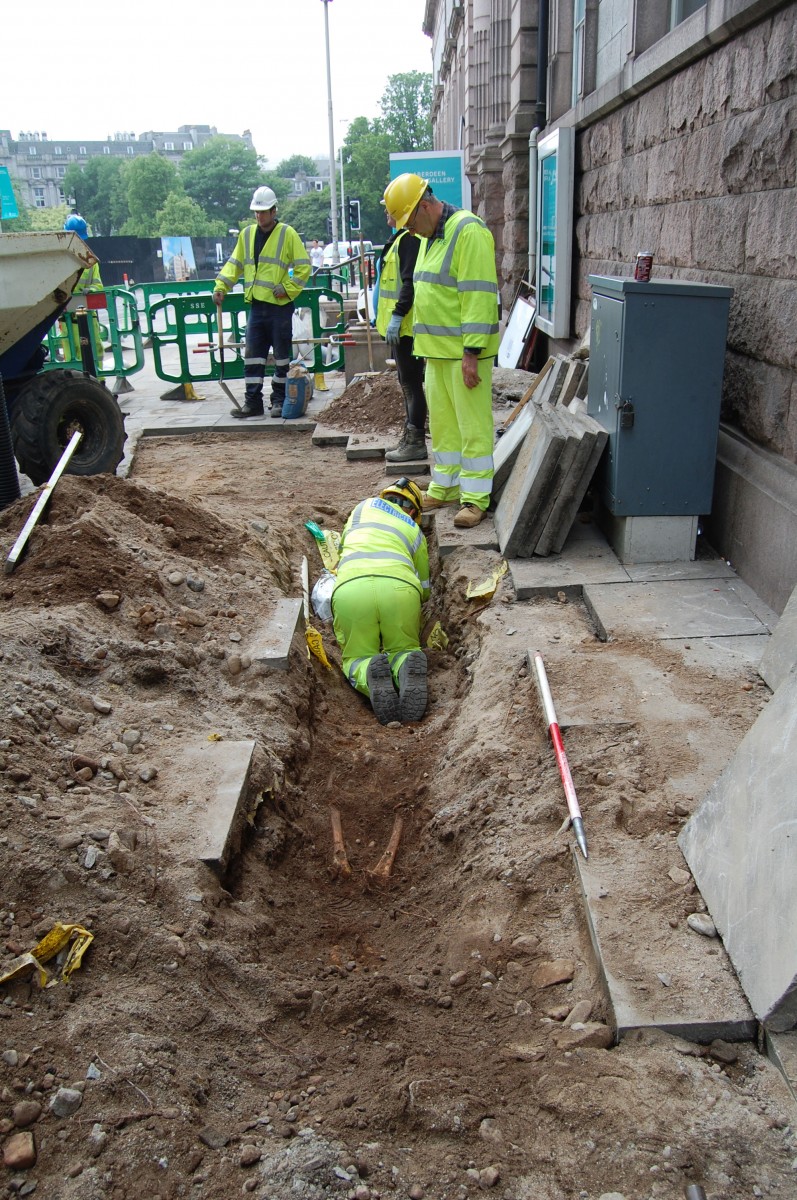 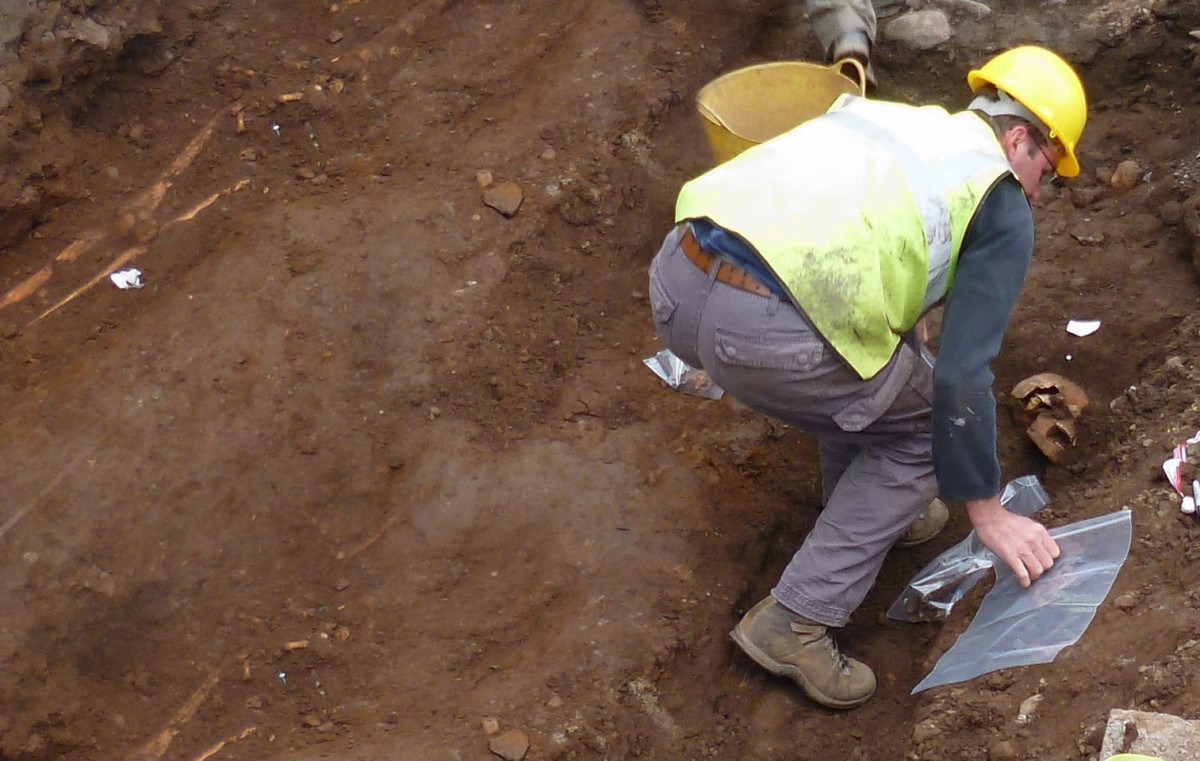 The find was made during utility works

Archaeologists in Aberdeen city centre have unearthed about 30 skeletons and the remains of a wall in an area that is believed to be the burial ground of a thirteenth-century Blackfriar friary and church.

The discovery was accidental when workers digging during utility works for a new boiler plant at Robert Gordon University’s Schoolhill came across the first skeleton and notified the authorities. Cameron Archaeology Ltd were employed by contractors to monitor all soil stripping with Aberdeenshire Council archaeologists providing support. The remains of a wall, possibly the east wall of Blackfriars church, have also been uncovered.

Archaeologists were aware of the Blackfriars house existence in the area but the exact location of the church and graveyard had been unknown. The first skeleton was found below the pavement area in front of Aberdeen Art Gallery during cabling works and the rest in trenches between the gallery and Robert Gordon’s University Administration building, and between RGU and Robert Gordon’s College, a private school. The remains are of men, women and children, including a very young baby, possibly a newborn buried in the upper fill of an adult grave. The bones, dating to the 13th century are well preserved and have now been lifted and sent for further study to determine the age of the individuals at death, their stature and possible causes of death. Work has continued onsite with cabling laid and the trenches mostly backfilled.

Radiocarbon dating will be carried out to establish when the burials took place and once investigations are complete, the bones will be reburied in the nearest consecrated ground to where they were originally buried. A small assemblage of building materials and pottery will also be studied by specialists to reveal more about the site.

The Blackfriar house was founded sometime between 1230 and 1249 by Alexander II. Both the friary and church were destroyed during the Protestant Reformation in the mid-sixteenth century. Excavations at the site in 1833 revealed a south-facing building belonging to the friary as well as a stone-built grave containing three skeletons.

The graveyard to the east of the church discovered this month is likely occupied by deceased members of Aberdeen families would could afford the costs of these burials, as in the thirteenth century people could pay money to be buried on sanctified grounds