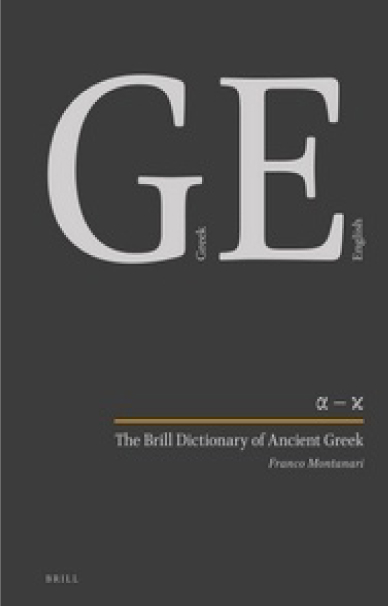 The Brill Dictionary of Ancient Greek

Translated and edited under the auspices of The Center for Hellenic Studies in Washington, DC, The Brill Dictionary of Ancient Greek is based on the completely revised 3rd Italian edition published in 2013 by Loescher Editore, Torino.

The Brill Dictionary of Ancient Greek is also available online and as a two-volume boxed set. The online edition is published in advance of the print version which will be available in early September of this year and can be ordered in a regular edition and a deluxe edition.

-The principal parts of some 15,000 verbs are listed directly following the entry and its etymology. For each of these forms, the occurrence in the ancient texts has been certified. When found only once, the location is cited.
-Nearly all entries include citations from the texts with careful mention of the source.
-The Dictionary is especially rich in personal names re-checked against the sources for the 3rd Italian edition, and in scientific terms, which have been categorized according to discipline.
-Each entry has a clear structure and typography making it easy to navigate.

Professor Franco Montanari, compiler of the dictionary: “As long as Latin was still a universal language, things were a bit easier for an author of a dictionary of Ancient Greek, but nowadays we face a double challenge. We have to deal, of course, with the continuing and evolving research on ancient Greek language and literature (new editions, new discoveries, new studies succeeding each other quickly) and the consequences for lexicography (also a fast-progressing field). At the same time, the language used to communicate the results of research to a globalized scholarly community, should not be ancient itself, but easy to understand to modern users. Brill’s English version of my dictionary bravely faces this double challenge.”

Professor Gregory Nagy, director of the Center for Hellenic Studies: “This Greek-English dictionary, following the lead of Franco Montanari, is a quantum leap in critical approaches to lexicography in and of itself. It is an honor for me and for my colleagues at the Center, Leonard Muellner and Madeleine Goh, to be a part of such an ambitious and most dynamic project. With the help of this essential new dictionary, I can confidently predict, the study of the Greek language will be enhanced for all time.”

Dr Madeleine Goh, co-editor of the English translation together with Dr Chad Schroeder: “We are very excited about the completion of this new lexicon that brings fresh, updated language and recent additions to the scholarship on the ancient Greek language in a multi-platform format. The scope of the ancient Greek covered, which includes not only classical Greek but also Greek of the late antique period, makes this a comprehensive and accessible resource.”

Senior Acquisitions Editor Irene van Rossum praised the publication of the dictionary: “This dictionary makes a valuable contribution to modern scholarship and is a jewel in the crown of Brill’s expanding list of reference works in classical studies. The Brill Dictionary of Ancient Greek will be used by generations of students and scholars of the Classics, the Ancient Greek language, and Biblical Studies.”

Franco Montanari is Professor of Ancient Greek Literature at the University of Genoa (Italy), Director of the Rivista di Filologia e di Istruzione Classica, of the Centro Italiano dell’Année Philologique and of theAristarchus project online, and a member of numerous international research centers and associations. Apart from the Vocabolario della Lingua Greca he has published many other scientific works on ancient scholarship and grammar, archaic Greek epic poets and other Greek poets of the Classical and Hellenistic periods, including Brill’s Companion to Hesiod (2009) and Brill’s Companion to Ancient Scholarship (2015).