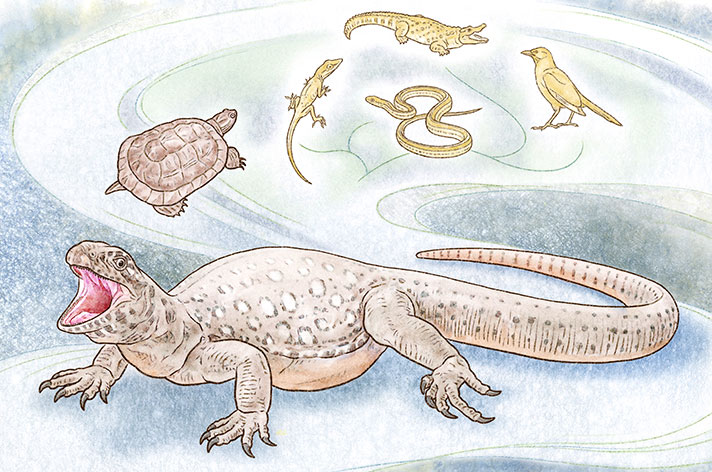 Eunotosaurus has the early word on turtles

A strange, gluttonous lizard that swallowed a small Frisbee...

There’s a twist in the turtle timeline.

Thanks to new fossil evidence, paleontologists are able to prove that turtles share a recent common ancestor with birds and crocodiles. The discovery may settle a longstanding argument among scientists about the origins of turtles.

At issue is the evolution of the turtle’s skull. Genetic analysis of molecular sequence data consistently places turtles in a group with birds and crocodilians. This would mean that early turtles had a diapsid skull, with a pair of openings behind each eye that allowed jaw muscles to tighten and flex during chewing. Yet there was no fossil evidence to confirm that position, until recently.

A group of researchers from Yale, the New York Institute of Technology (NYIT), and the Denver Museum of Nature and Science found the telltale skull openings in a juvenile example of Eunotosaurus africanus, a 260-million-year-old reptile. Eunotosaurus was a creature that one scientist said resembled “a strange, gluttonous lizard that swallowed a small Frisbee.”

“Eunotosaurus is a ‘cryptic’ diapsid because it closes the skull openings later in life,” said Bhart-Anjan Bhullar, a Yale assistant professor in the Department of Geology and Geophysics and co-author of a paper in Nature describing the finding. “Only the fortuitous discovery of these openings in a very young juvenile allowed us to realize this.”

Gaberiel Bever of NYIT is the first author of the paper. The other co-authors are Daniel Field, a doctoral candidate in the Department of Geology and Geophysics at Yale; and Tyler Lyson of the Denver Museum of Nature and Science.

“This process of apparent conflict between DNA and fossils, and eventual reconciliation through new discoveries is a great example of scientific progress, and how our knowledge of vertebrate evolution is itself continually evolving,” Field said.