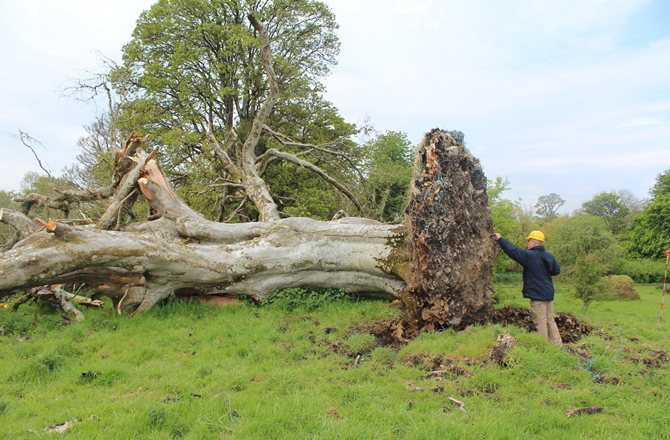 Heavy rains and winds in County Sligo, Ireland, toppled a massive, centuries-old beech tree, bringing to light the skeleton of a Medieval teenager, whose bones were entangled in the roots. The youth died a violent death, had a Christian burial and was taller than the average Medieval man.

After analysing the skeletal remains and conducting a radiocarbon dating archaeologists said the man was 17 to 20 years old at the time of his death and that he lived in the early Medieval period, between 1030 and 1200 AD. Two stab wounds at the ribs and his left hand led to the conclusion that he suffered a violent death, either in battle or during a personal dispute.

“The upper part of the skeleton was raised into the air trapped within the root system,” archaeologists Marion Dowd of Sligo-Leitrim Archaeological Services said.

“The lower leg bones, however, remained intact in the ground. Effectively as the tree collapsed, it snapped the skeleton in two,” Dowd said.

The youth was taller than the average Medieval man. Archaeologists are almost certain that he came from a local Gaelic family. Also, that he has toiled in physical labor from a young age, as suggested by mild spinal joint disease in the skeleton.

The teenager was given a Christian burial. Whether he was buried in a cemetery or not, remains unknown. “While historical records state the presence of a church and graveyard in the area, no above-ground trace survives and no other skeletons were encountered during the excavations,” Sligo-Leitrim Archaeological Services said.