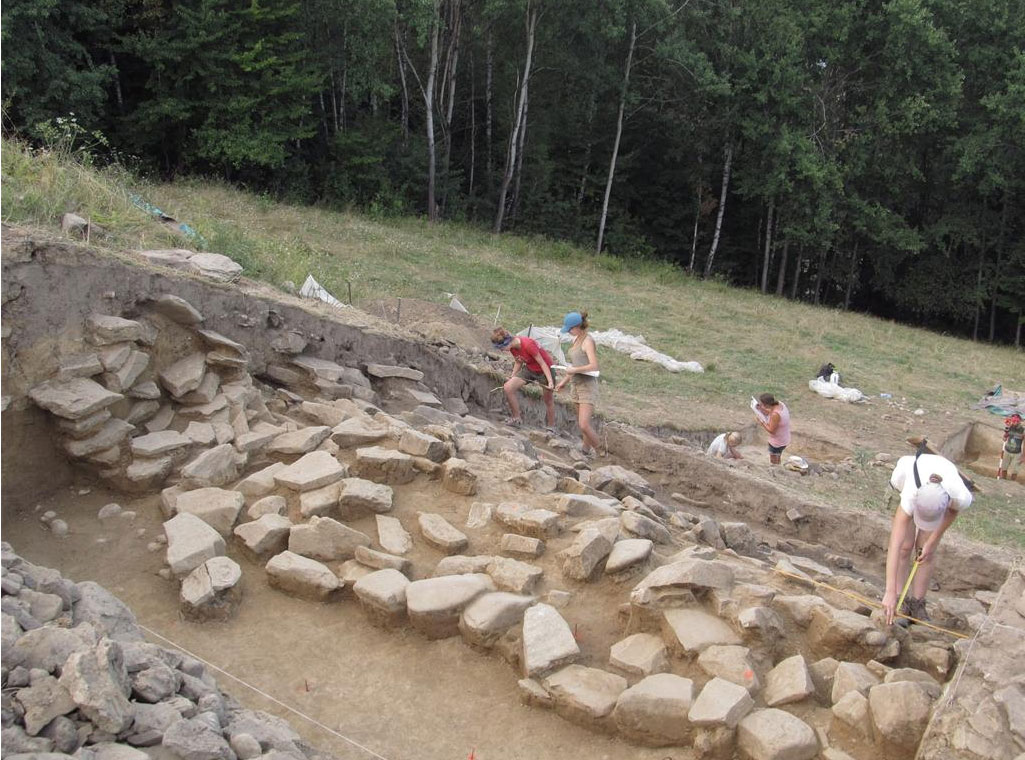 The oldest example of stone wall in the history of construction in the Polish lands, more than two and a half thousand years older than Romanesque architecture, has been discovered by archaeologists from Kraków on Zyndram’s Hill in Maszkowice (Małopolska).

“Its inhabitants were not indigenous people living in Małopolska since the end of the Stone Age, but a small, no more than 12-person group of colonists from the south, from the territory of present-day Hungary”, Dr. Przybyła said.

Other archaeological sites associated with the community archaeologists refer to as the Ottomány culture have been discovered in the Polish Carpathians. The best known is the fortified settlement in Trzcinica near Jasło, but that settlement is very definitely different from the one discovered in Maszkowice. In the former, the embankments were not built of stones, but of earth and wood.

“In the whole Central Europe there are only a dozen sites dated so early with more or less well-preserved stone fortifications. At that time, the use of stone as building material was typical for the Mediterranean areas. In the temperate zone of Europe until the Middle Ages fortifications were built with wood and clay,” the archaeologist said.

Scientists were surprised by the size of the structure. The top of the hill was flattened, creating a plateau of 0.5 hectares. Tons of clay from the hilltop were used to build a terrace on the gentle eastern and northern slope of the hill, which expanded the area of the settlement. The wall is made of large, half-meter sandstone blocks held together with clay.

“From the geophysical research we know that the wall was about 120-140m long, surrounding the entire settlement from the east and north. Undoubtedly, besides being a retaining wall, it also hindered potential attackers’ access to the settlement,” added Dr. Przybyła.

Unlike the interior wall, the external face of the retaining wall had not been made of sandstone blocks with irregular shapes, but huge, tessellating blocks, often reaching 1 meter in length. Some of them have a regular hexagon shape. 4-5 layers of tightly adjacent stones are preserved to this day. Given the height of the terrace and the number of stones that fell from the wall and have been found below its level, the original height of the fortification facade could reach 2.7 m.

On the slope, about 5 meters from the face of the wall, the defence system was further strengthened by an approximately 1.5 m deep, narrow trench with a triangular cross-section. Archaeologists were able to discover the remains of the entrance gate. It has the form of a narrow, 1.5 m corridor, crossing the wall and leading up through the clay embankment, toward the interior of the settlement. The walls of this passage were reinforced with large sandstone slabs “anchored” in the lowest layers of stones forming a retaining wall.