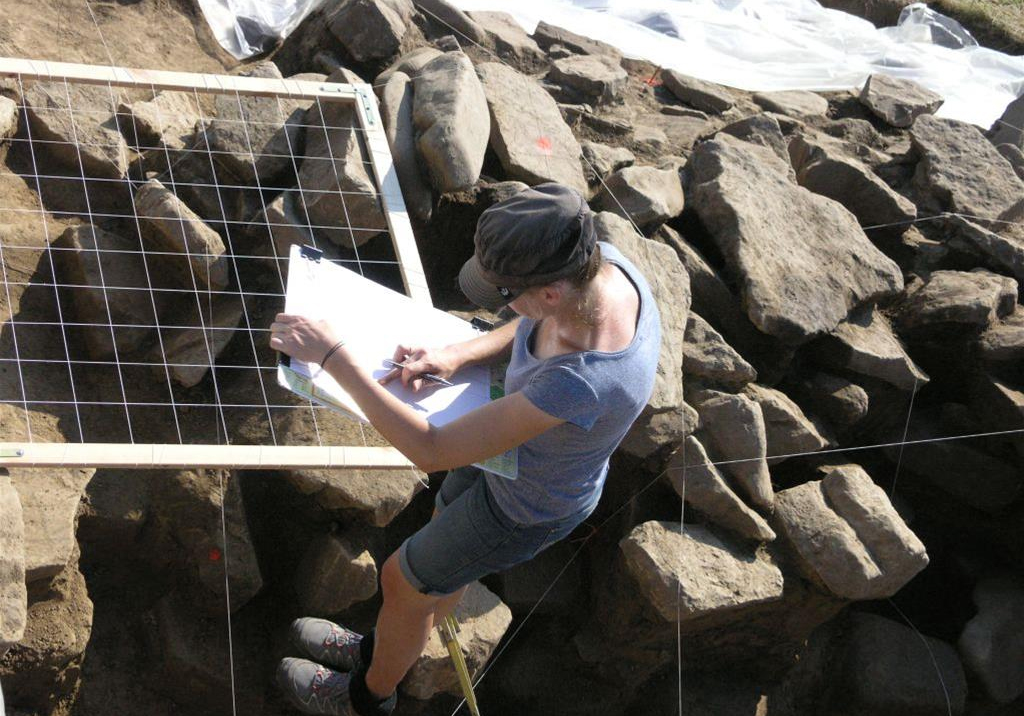 More about the builders of the Bronze Age-wall in Poland

Team believes some of them came from the Mediterranean or Adriatic

Unique stone wall that protected the villagers who came from the area of the Mediterranean more than 3.5 thousand years ago, reveals further secrets to scientists working in Maszkowice (Małopolska). To their surprise, the life within the wall did not differ much from that in other surrounding villages.

The oldest stone wall in the history of the Polish lands, more than 2.5 thousand years older than the monuments of Romanesque architecture, was discovered in 2015 in Maszkowice on Mount Zyndram by researchers from the Jagiellonian University. The find was completely unexpected, although archaeologists had been investigating the place since the beginning of the 20th century.

Last year, archaeologists unearthed a large fragment of monumental stone wall that protected a half hectare settlement more than 3.5 thousand years ago.

“We consulted our findings with a large group of scientists from all over Europe. It turned out that there were no similar structures from this period in Germany, Romania or Hungary,” explained in an interview with PAP Dr. Marcin S. Przybyła from the Institute of Archaeology of the Jagiellonian University in Kraków. “The closest similarities in architectural solutions can be found in the settlement situated on the peninsula of Istria in northern Croatia,” he added.

The advanced structure was very well thought out. Builders used long stones, so-called “staples” that held the fortification together, connecting the wall facade with its interior. The designer of the wall had to have a lot of experience in building this type of structures, believes the scientist.

Archaeologists are now preparing for the new season of excavations, which this year will take place in July and August. Between seasons, scientists worked on finds discovered during the excavations, not only to monuments, but also organic debris.

Particularly informative were archaeobotanical studies, conducted on grains and seeds, which were analysed microscopically. It was determined that the most cultivated grain was emmer – a grain similar to wheat, popular today in the area of the Mediterranean.

“For us it is a hint that the villagers had to develop the valley of the Dunajec, because it’s the only place where such a demanding grain could be grown,” the archaeologist said. Barley had a much smaller role -perhaps it was used to feed animals- the researcher believes. In addition, the analysis showed that the villagers gathered fruit: strawberries and blackthorn.

Scientists were also surprised by the shape of the interior of the settlement. While the fortification wall was built in an unusual way, the houses located inside were no different from those known from this period in Central Europe. “It’s as if they wanted to highlight their differences clearly to strangers, people from outside the village. What happened inside was private and adjusted to local ecological conditions,” said Dr. Przybyła.

According to the researcher, within the walls about twenty houses were built, on a square plan of approx. 6×6 m. A typical structure was supported by four pillars. Between them the builders placed braid, which was covered with thick layers of clay. Roofs were probably covered with straw or reeds.

Through meticulous research of the remains of one of the houses, the researchers were able to reconstruct the functional division of its interior. For example, the corners of the houses were used to store grain (fragments of large vessels and whole grains were preserved), and in the central part there was a furnace (where debris was found in the form of straw and tableware, for example cups and pots), and seeds of wild plants.

Scientists are confident that at least some villagers came from the distant Mediterranean or Adriatic areas, as only people in these areas had the architectural know-how required to erect stone walls in such a technologically advanced form.

Though defended by well-made walls, the settlement did not last long. The fortification wall were built in the years 1750-1690 BC. “That was when the settlement reached its apogee,” the archaeologist said.

With time, the techniques were forgotten and abandoned by the villagers. Less than a hundred years after its elevation the fortification wall began to crumble and collapse. Archaeologists discovered traces of reconstruction, but it was an “incoherent makeshift work,” said Dr. Przybyła. In his opinion, after several generations the ancient skills of villagers had disappeared.

The settlement was abandoned after more than two hundred years. No evidence is found until now, which could imply that a disaster or an invasion led to this. After five years people returned to the hill, but that group was totally unrelated to previous inhabitants. Research of archaeologists shows that even in those days the monumental walls were visible in the area. The new residents used them to support the outer walls of newly built houses.

This year, archaeologists plan to conduct research in a large area. They want to study the younger settlement on Mount Zyndram and conduct further investigations of the stone wall. Later they are planning to study a possible bastion or a stone gate — another stone structure, which has no counterparts in Poland over the last 3.5 thousand years.