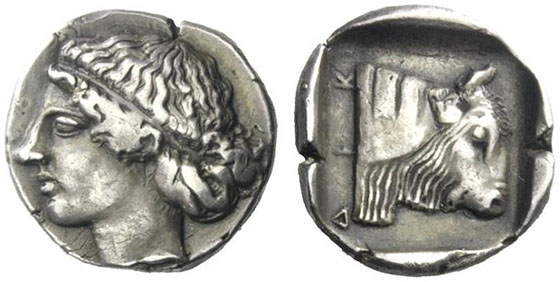 Religious acts in the reconciliation agreement of Dikaia

Seminar about an inscription found in Nea Kallikrateia

“Religious acts in the reconciliation agreement of Dikaia” is the topic to be presented by E. Voutiras in the framework of the Athens Greek Religion Seminar, organized by the Swedish Institute at Athens. Dikaia was a colony of Eretria and the lecture will refer to an inscription found many years ago in Nea Kallikrateia, where a number of decrees passed by the city of Dikaia are contained.

In the summer of 2001 an inscribed stele of Pentelic marble was presented to Dr. Kostas Sismanidis, archaeologist of the then 16th Ephorate of Prehistoric and Classical Antiquities of Thesaloniki, by a farmer who reported that he had found it in a heap of stones within his property on the “Toumba Angelaki”, a natural mound just south of the village of Aghia Paraskevi, about 15 km SE of Thessaloniki.

Subsequent investigation by Dr. Sismanidis and E. Voutiras enabled them to establish that the inscription had come to light a number of years earlier in the modern town of Nea Kallikrateia, on the eastern shore of the Thermaic gulf, where recent rescue excavations have revealed the presence of a settlement of the classical period (5th-4th cent. BC). “This is therefore the site of Dikaia, a colony of Eretria first attested in the Athenian tribute lists of the 5th cent. BC”, E. Voutiras explains in the seminar abstract.

“The inscription is 105 lines long and the style of the letters points to a date close to the middle of the 4th cent. BC; it contains a series of decrees passed by the city of Dikaia, presumably in a single session of the assembly, setting the terms of a reconciliation agreement between two opposed factions, one of which had gone into exile, followed by a civic oath to be sworn by all citizens.

“The agreement can be dated with relative precision, for it is guaranteed by Perdikkas III of Macedonia, the elder brother of Philip II, who reigned from 365 to 359 BC. The new inscription from Dikaia contains interesting infomation about the institutions, the cults and the calendar of this Eretrian colony, which appears to have maintained very close ties to its mother city.

“A new month, Daphnephorion, is attested for the first time and there is good reason to believe that this was the first month of the Eretrian calendar. Certain religious acts are mentioned in connection with the ceremony of the oath. It is noteworthy that the oath, which is preceded by the sacrifice of a boar, is to be sworn by the citizens not only in the agora, which is usual in such cases, but also in the «three holiest sanctuaries» of the city.

“Another important piece of information is that the citizens who swore the oath also had to perform a ritual of purification. Finally there is mention of a third ritual act, according to which each citizen took a token from the altar as proof that he had sworn the oath and as a guarantee that he would abide by it.”