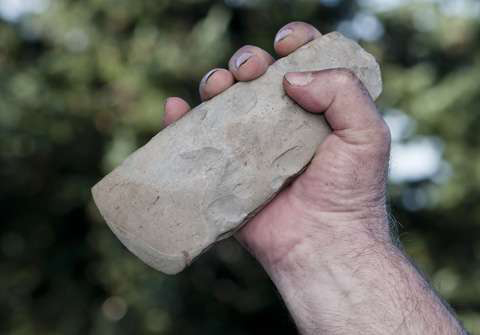 How to find out about the human mind through stone

According to Eder Domínguez-Ballesteros, co-author of the article ‘Flint knapping and determination of human handedness. Methodological proposal with quantifiable results’, laterality is related to the way our brain is organised, and it assigns different roles to each of our limbs when a specific task is carried out. Studying laterality, its origin and development helps to understand the organisation and asymmetries better, and to find out how these asymmetries have evolved throughout history.

Laterality is the preference of human beings for one side of our bodies; being left-handed or right-handed, for example, or having a preference for using one eye or ear or the other. In the view of the geologist and primatologist Eder Domínguez-Ballesteros, “lateralised behaviour in humans may in some way have been reflected in their technological products, in particular, in the things they made. Besides, flint knapping -inherent in our genus since the first stages in its evolution- is an excellent source of information for studying lateralization in humans”.

The research was conducted in the following way: “The flakes, which could be the result of lithic knapping, remains…, or the “anvil” for making an artefact, have been analysed. We focus on the butt of the flake which is where part of the percussion platform has been preserved. The fractures that appear on the platform are oriented according to the direction of the impact made on it by the percussor. Once the direction of the impact is known, it is possible, with a high degree of reliability, to determine whether it was produced by the left hand or the right hand,” explained Domínguez-Ballesteros.

“To hit the core on the same spot, a knapper, whether left-handed or right-handed, has to turn it to position it on one side of him or on the other. The angle at which the blow is made with both the right-handed and the left-handed percussor would be the same, but in exactly the opposite direction,” said the researcher, who went on to say: “The core is the fragment of raw material from which the flakes are removed, and the percussion platform, the surface on which the core is struck”.

One flint flake, one knapper

The first pieces of work oriented towards determining human laterality through flint flakes -the product of the flint knapping of our ancestors- were made by Toth in 1985. According to this researcher, while the flint flakes were being removed, a right-handed knapper would turn the core in a clockwise direction, while a left-handed one would do so in the opposite, anti-clockwise direction. However, subsequent pieces of research (Patterson and Sollberg) showed that a left-handed knapper could produce a certain number of right-handed flakes, and vice versa.

Later, Rugg and Mullane studied the orientation of the percussion cone of the flint flake and linked it with the direction of the percussion angle; yet Bargalló and Mosquera showed that the Rugg and Mullane method alone does not allow the knapper’s laterality to be determined. In the end, Domínguez-Ballesteros and Álvaro Arrizabalaga came up with a method allowing each individual flint flake to be linked to the laterality of the knapper who produced it, without any need to have available a number of flakes produced by the same knapper. So it is an extensive method that can be applied across various periods of the archaeological record.