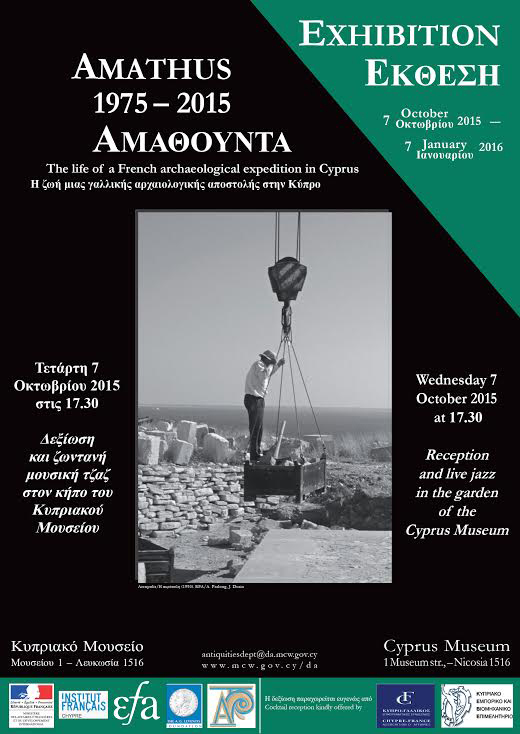 Exhibition about the life of a French archaeological expedition in Cyprus

The exhibition is being presented in the garden of the Cyprus Museum to mark the 40th anniversary of the beginning of excavation at Amathus. The exhibition was organized by the French School in Athens and was initially presented at the School on the occasion of an international conference on the city-kingdoms of Cyprus.

The aim of the photographic exhibition is to inform the public not only about the activities of the archaeological mission but also about the discoveries and the history of one of the most important kingdoms of Cyprus. At the same time, an exhibition on the excavations of the French archaeological mission to Salamis is also open to the public at the ticket office of the archaeological site of Kition. This exhibition marks the 50th anniversary since excavations began at the equally significant city of Salamis, where work was unfortunately cut short by the 1974 Turkish invasion of the island. Other important French archaeological expeditions at the sites of Agios Tychonas-Klimonas, Parekklisia-Shillourokampos and Choirokoitia continue to increase our knowledge on the prehistory of Cyprus and indicate the interest that France has shown in the archaeology of our country.

The French School expedition to Amathus began its work in 1975 with the support of the French Ministry of Foreign Affairs. Excavations were carried out at the acropolis, the fortifications, and the harbour; surveys and excavations were also carried out on the outskirts of the ancient city. Monumental buildings like the temple of Aphrodite were discovered as well as the royal palace and the basilica on the acropolis. Following the excavation of the Agora by the Department of Antiquities and of the cemeteries, approximately 17 centuries of life have been documented in the area of Amathus, helping us comprehend the urban plan and the extent of the city. The new archaeological excavations that are being put into motion aim towards defining the Agora in the Lower City and the internal harbour, as well as increasing our knowledge on the nautical and financial structures of the city.