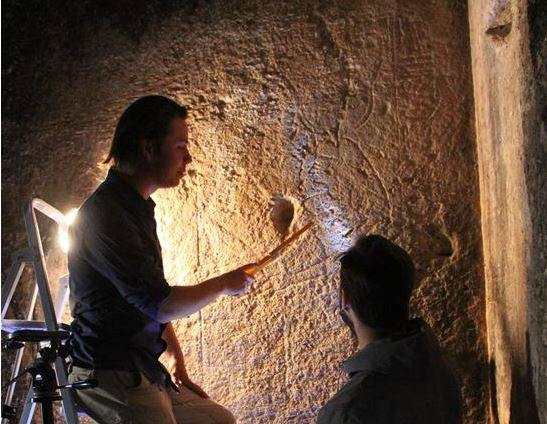 Hatshepsut’s Temple at Gebelein is getting rediscovered

Studied in detail by a Polish mission

Hatshepsut’s Temple at Gebelein is getting rediscovered as Polish archaeologists have made miracles in clarifying the details of its reliefs and texts.

The rock-cut, two-room structure was known since long ago to the local authorities of Gebelein, in Upper Egypt as a continuous mystery. The poor conditions of its decoration as well as the (seemingly) lack of royal names from its inscriptions made the site a never ending puzzle for scholars, who did not dare to study it. Till now.

Enter a team of scholars from the Polish Centre of Mediterranean Archaeology of the University of Warsaw, who managed to study the reliefs and inscriptions but also to record them in photos. These photos were later processed in specialized software so that to enhance the features of the reliefs that, due to damage, are no longer visible or very hard to see for the naked eye. The results were stunning, allowing the experts, among others, to attribute the temple to the famous female pharaoh Hatshepsut!

At first, research confirmed that the temple’s iconographical program’s destruction was largely deliberate. Royal cartouches, as well as images of deities, with the exception of the ones connected with the sun, had particularly suffered in the hands of those who had attempted to erase them in order to cause their demise. Such cases of damnatio memoriae are widely seen in New Kingdom Egypt during two phases: after Hatshepsut, when her successor Thutmose III tried to literally kick her out of Egyptian history, and during the Amarna Period, when Pharaoh Akhenaten attempted to reduce multiple gods to one solar deity, the Aten.

“This temple was dedicated to two gods. There is no doubt that one of them was Hathor, with the cult epithet Lady of Gebelein. The other deity could be Amun-Ra. Unfortunately, his depictions are not preserved and further studies are needed to verify this idea”, says Daniel Takács, a member of the expedition, adding that Hathor’s images in the temple, unlike the ones of other deities, had survived.

As for the presence of  Hatshepsut, it is indicated among others, by fragments of preserved hieroglyphic inscription containing the feminine word endings. The context in which the cartouche is located indicates that it contained the name of this queen. Further work in the rock temple at Gebelein may also provide more information on her reign.