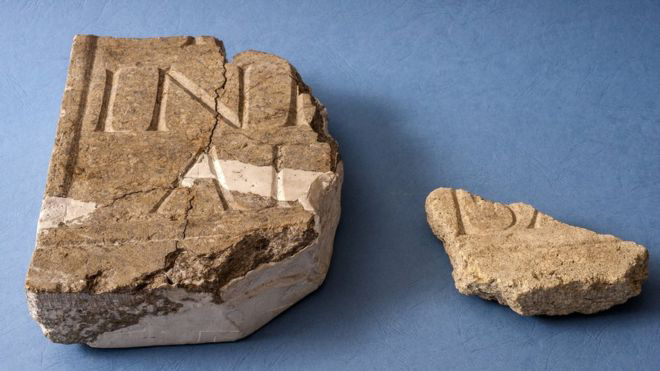 On display until 27th November

Two pieces from a Roman building sign destroyed 2000 years ago, possibly by the legendary Boudica, have been reunited thanks to a remarkable discovery made by the University of Reading.

During the last season of excavating Silchester Roman Town in 2013, Reading archaeologists found a fragment of stone inscribed with the letters ‘ba’. Expert analysis has now astonishingly revealed that this matches a piece with the letters ‘At’ which was found at Silchester in 1891, and is now part of Reading Museum’s Silchester Collection.

Together these read At(e)ba(tum) –  ‘of the Atrebates’ – the French tribe who likely founded Silchester in 1st Century BC.  The two pieces were found approximately ten metres apart in the SE quarter of Insula III, a block of the Roman Town. They are probably from a slab of marble from Purbeck in Dorset, which was either a sign commemorating the construction of a significant building, or a dedication to a deity.

Professor Mike Fulford, from the University of Reading’s Department of Archaeology, said: “Archaeology never ceases to amaze. Matching pieces which were discovered over 100 years apart to a 2000 year old object is an incredibly rare  – perhaps happening only once or twice in the UK before. The 2013 piece is special in its own right – evidence of very early destruction of a monumental building in the mid or mid-to-late 1st century AD in Britain is exceptional – but little did we know about what was about to come to light.”

After it was excavated the piece was analysed by Dr Roger Tomlin, an authority on the inscriptions of Roman Britain. He confirmed the pieces were from the same object – both fragments boasting the same style and size of lettering, as well as the dimensions of the Purbeck Marble slab on which the inscription was carved.

Paul Gittings, Lead Member for Culture at Reading Borough Council, said: “I’m delighted by the fortunate pairing of these 2000 year old fragments. It shows excellent partnership working between Reading Museum and The University’s Museum of English Rural Life to successfully bring these important pieces together. This is a fascinating opportunity for people to gain a glimpse into our local history and I’d urge everyone to go along to the Museum of English Rural Life before 27th November to see this rare exhibit.”

Despite this amazing occurrence there could be more revelations to come. The name of the building is yet to be revealed but previous work at Silchester has connected the site to the infamous emperor Nero, as well as queen Boudica who led a famous rebellion against the Roman Empire.

Professor Fulford added: “We now know what the bottom line of the sign reads – however the top line remains a mystery. It’s a tantalising thought that this might link to Nero himself who is known to have commissioned major building projects in Silchester. Our work to uncover the origins (link) of Silchester continues next year -perhaps a name could emerge. It’s unlikely – but this story goes to show that that when it comes to archaeology, anything is possible.”

People can find out more about this remarkable story by visiting the University’s Museum of English Rural Life where the pieces are on display until 27th November.