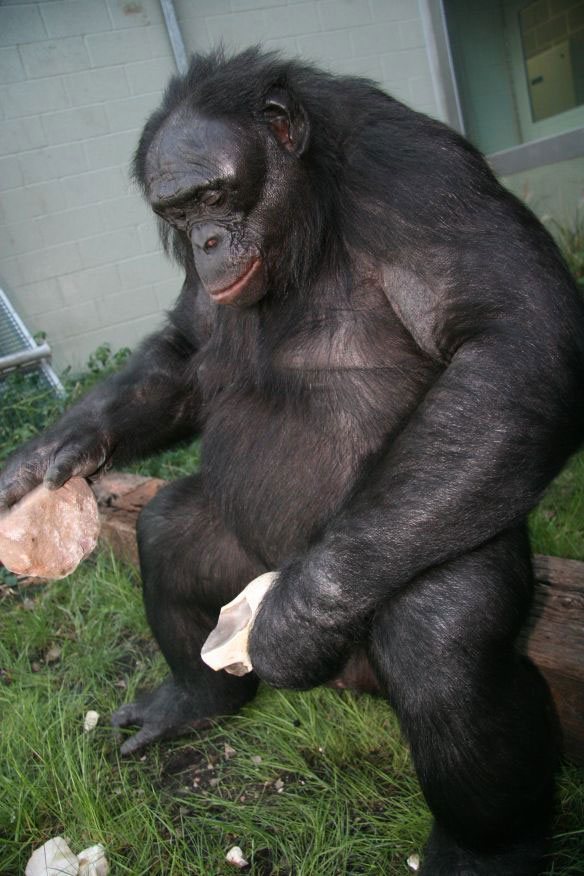 When motivated, they have analogous capabilities to those of archaic pre-humans

For the first time, a scientific study has observed bonobos (an analogous race to chimpanzees) making sophisticated use of ancient pre-agricultural tools in a manner similar to that which has hitherto been considered the prerogative of archaic pre-human hominins and other members of the Homo genus.

Among other findings, a bonobo was observed for the first time making and using spears in a social setting for the purpose of attack and defense. “I believe that the current study will break down our cultural hang-up as humans concerning the inherent capabilities and potential of bonobos and chimpanzees,” says Itai Roffman of the Institute of Evolution at the University of Haifa, who undertook the study (as a recipient of the Adams Fellowship from the Israel National Academy of Sciences and Humanities).

Interestingly, the bonobos are considered less sophisticated than their chimpanzee siblings. Chimpanzees have been observed in nature using branches to dig for tubers in the ground and to break into termite nests and beehives. As part of their cultural diversity, they have also been documented breaking nuts with hammer and anvil, and even manipulating branches into spears for use in hunting small prosimians that hide in tree hollows. By contrast, bonobos were known as a social species that engages in extensive sexual behavior and have not been observed in nature using tools. Roffman’s doctorate thesis (under the supervision of Professors Eviatar Nevo and Avraham Ronen of the University of Haifa) examines diverse pre-human/Homo characteristics among chimpanzees and bonobos. Three years ago, Roffman already managed to show that two bonobos were capable of preparing and using a range of early Homo type stone tools in order to reach inaccessible food in natural contexts. These two bonobos – famous siblings Kanzi and Pan-banisha – grew up in a human environment and have even learned to communicate using computerized English Lexigram symbols, allowing them to competently engage in rational discourse with humans.

In the current study, which was published recently in the American Journal of Physical Anthropology, Roffman sought to examine whether other bonobos, in a sanctuary and a zoo, were also capable of undertaking sophisticated sequential-actions in extractive foraging tasks. This study included a group of eight bonobos at Wuppertal zoo, Germany, who lived in conditions of full captivity, and a group of seven bonobos from the  Bonobo Hope sanctuary in Iowa, USA (including Kanzi and Pan-banisha) who lived in culturally-rich conditions with forest access. Both groups were presented with similar natural challenges: they were required to reach food either buried deep in the ground (covered by a layer of stones of varying sizes), hidden inside large ungulate bones (filled with dried fruit to simulate bone marrow), or concealed inside small concrete capsules. In addition to stones, the researcher also placed alongside each of these challenges natural raw materials, such as green branches of varying sizes and deer antlers.

Within a few days, the bonobos at the sanctuary began to prepare and use task-appropriate tools in a deliberate and planned manner. For example, they realized that in order to reach the food under the ground they must work in stages (specific chain of actions) using tool-sets. First, they removed the layer of stones using their hands and sticks; also using deer antlers as a rake. After reaching the soil layer, they manipulated short branches using them as a dagger or pick to gouge holes in the earth. Then they widened and deepened the holes using larger branches as shovels or spades, while the deer antlers were used as awls or mattocks. Finally, they extracted the food using a long branch as a pole and lever. They also used stones and antlers as hammers to break ungulate bones or concrete capsules. The zoo bonobos also managed to perform food extraction tasks, but it took them a month to reach this point. They were successful in their missions in a much smaller number of instances and the quality of their performance was far below that of the sanctuary bonobos.

This is the first time that evidence has been obtained showing that any species other than archaic pre-humans (members of the Homo genus) can skillfully employ ancient pre-agricultural tool assisted strategies such as those used by Paranthropus. “In the caves of these hominins in South America,” Roffman explains, “horn cores and bones have been found with wear-pattern markings showing that they were used as digging tools. Moreover, breakage patterns on long bones found in caves in Europe inhabited by Neanderthals and Cro-Magnon were identical to the way the bonobo Pan-Banisha broke her long bone. The bonobos essentially showed that once they have the motivation to do so, they have analogous capabilities to those of archaic pre-humans, which is logical as chimpanzees and bonobos are our genetic sister species.”

Roffman moves on from the findings themselves to their evolutionary ramifications. He notes that Paranthropus lived some 2-1 million years ago in a multi-habitat savannah environment with limited resources. Their cognitive and cultural capabilities enabled them to invent and develop survival strategies in order to acquire food. This gave them an evolutionary advantage and enabled them to survive alongside other hominin species diversifying and developing into new Homo species and eventually culminating with modern humans. The bonobos in these experiments do not live in areas poor in resources, but simulating these conditions (requiring them to make an effort in order to secure their favorite food) proved that they are capable of performing tasks that have hitherto been considered the unique domain of our early Homo/hominin ancestors. “Until now, only a few groups of bonobos living in nature have been studied,” Roffman explains. “These groups lived in areas rich in resources, and previous research drew conclusions about the entire species on this basis.”

It is also apparent to Roffman why such a sharp difference was seen between the bonobos at the sanctuary and those in the zoo: the zoo’s conditions do not promote their hominin capabilities potential due to lack of proper natural habitats. Despite this, one bonobo from the zoo group managed a unique achievement. The dominant female Eja chose and manipulated particularly long sticks (removing small branches and pealing bark) and used her teeth to hone them into “spears.” Every time Roffman approached, she attempted to attack him with the spear through the bars. Chimpanzees have been observed using “spears” while hunting in tree holes, but never in a social context of attack and defense. Roffman theorizes why this behavior was seen at the zoo: “The conditions there do not facilitate direct personal contact for stress relief, so it was difficult to bond with them, in contrast to the wonderful connection I had with the bonobos at the sanctuary. To the zoo bonobos, I was a trespasser who was violating their privacy and stalking them. This shows how even a species that is considered peaceful and loving becomes aggressive and suspicious in social contexts of incarceration and mistrust in humans,” Roffman concluded.