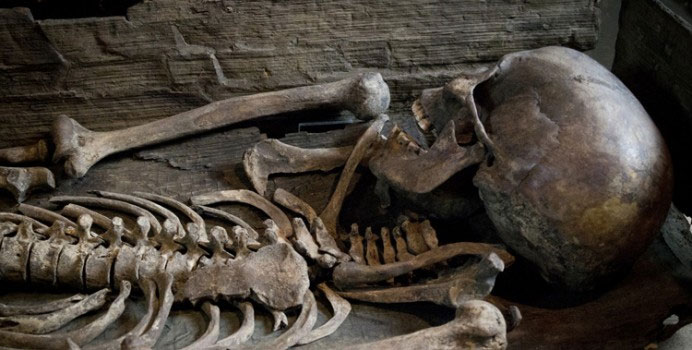 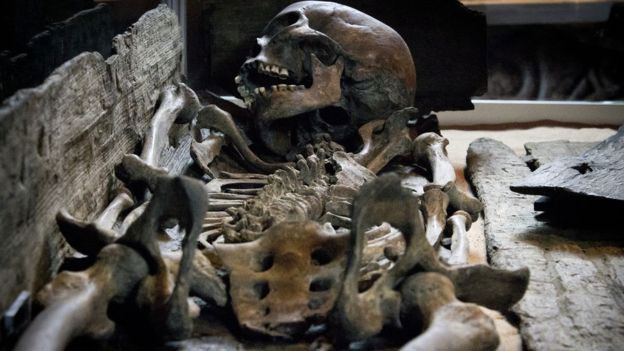 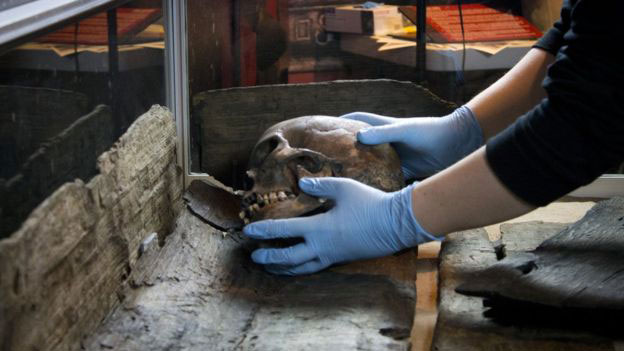 At Jorvik Viking Centre in York

An extremely rare skeletal find joins the displays at JORVIK Viking Centre this month. It is the first time one of the Swinegate skeletons, uncovered during archaeological excavations in 1990, goes on public display.

The female skeleton was found as part of a larger excavation in the Swinegate area of York by York Archaeological Trust (YAT) which took place in late 1989 and early 1990.  The dig explored the churchyard of the lost church of St Benet, which stood on the site from around the 8th to the early 14thcentury.  Over 100 burials were discovered at the site, several of which date from the period of York’s Viking occupation, between AD 866 and AD 1066.  The skeleton on display is thought to date from the late Viking period, possibly a woman who was alive during the reign of King Canute, who took the English throne 999 years ago in 1016.  What makes the Swinegate finds unusual is that many of the timber coffins in which the bodies were buried remain largely intact.

“For archaeologists studying Viking history, finding a skeleton preserved in a wooden coffin is a unique find indeed – as timber rarely survives for so long – but that is precisely what we have in this display,” comments Sarah Maltby, director of attractions for York Archaeological Trust.  “Once again, as we found in the Coppergate dig of the late 1970s, York’s waterlogged soil conditions preserved the timber of several coffins, including this one, so what our archaeologists unearthed represents a series of previously undisturbed burials with complete skeletons, some of which date back more than 1000 years.”

The condition of the wood gives this coffin national significance, as so few similar examples exist – particularly as this coffin would have been fairly fragile when first constructed, which tells archaeologists that it would have only been transported a short distance for burial.  The coffin was made for a young woman, estimated at being aged between 26 and 35.  Recent analysis of the bones reveals some of her life story– including that she had inadequate nutrition or disease as a child and degenerative joint disease in the spine and hips – but there is no indication of the cause of her death.

Over the last few weeks YAT’s conservation team have undertaken a thorough examination of the coffin to determine its structure and reveal how it was constructed. “The coffin is made from oak with pegged fastenings, and you can see that during construction, the piece of timber used for the lid of the coffin split and was repaired using a baton fastened inside, with the pegs cut flush on the outer surface to make the repair less obvious,” adds Sarah.