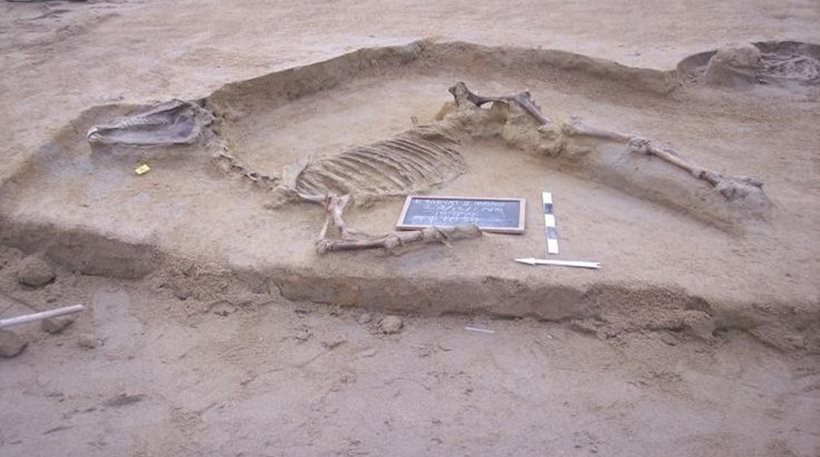 Another horse burial found in Faliron

Intact even down to the hooves

A well-preserved horse burial was found during excavations in the Faliron Delta conducted due to landscaping works around the Stavros Niarchos Foundation Cultural Centre.

The find was presented to the Central Archaeological Council on Tuesday.

It should be noted that it is not the first horse burial discovered at the Faliron necropolis. Another four intact horse burials have come to light at the site. However, the state of preservation of the recent find is very rare, as the horse skeleton is intact down to the hooves. Therefore, archaeologists hope to come to significant conclusions on the breeds and the evolution of the species. “From this point of view, this find is very important”, Stella Chrysoulaki, head of West Attica, Piraeus and the Islands Ephorate of Antiquities who is in charge of the Faliron excavations noted.

Burials of horses occasionally occurred in cemeteries for people in antiquity, and it was not strange for the Faliron necropolis “where unbelievable things happen”, Mrs. Chrysoulaki said about the cemetery, which dates back to the 8th c. BC and has revealed many unusual finds. Among them were the skeletal remains of a man and a woman who were buried holding hands, indicating that they actually died together.

Up to no 136 burials have been found in the Archaic Faliron necropolis, including the horse burial site, sections of a mass grave, 51 pithos burials, 9 cremations (one of these of a horse) and a cist grave, as well as burial urns.