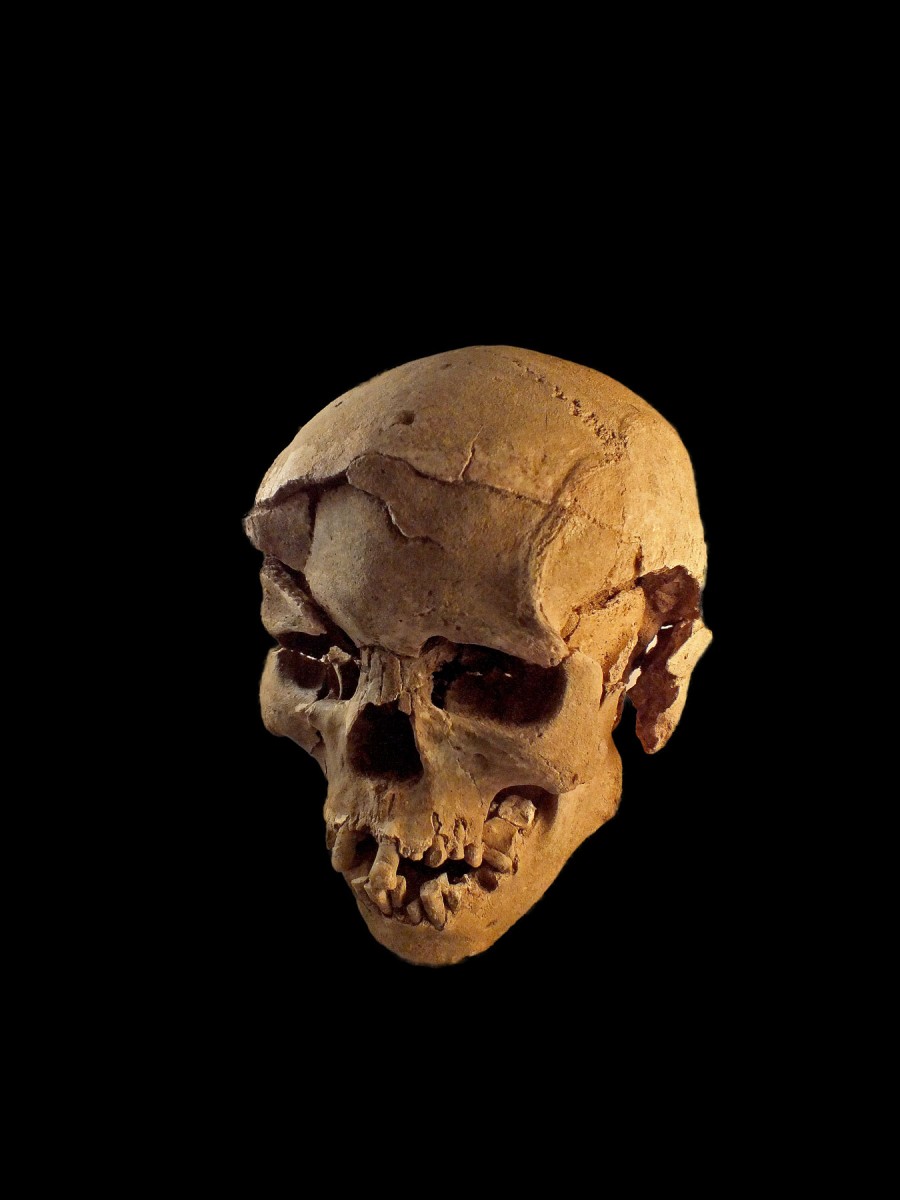 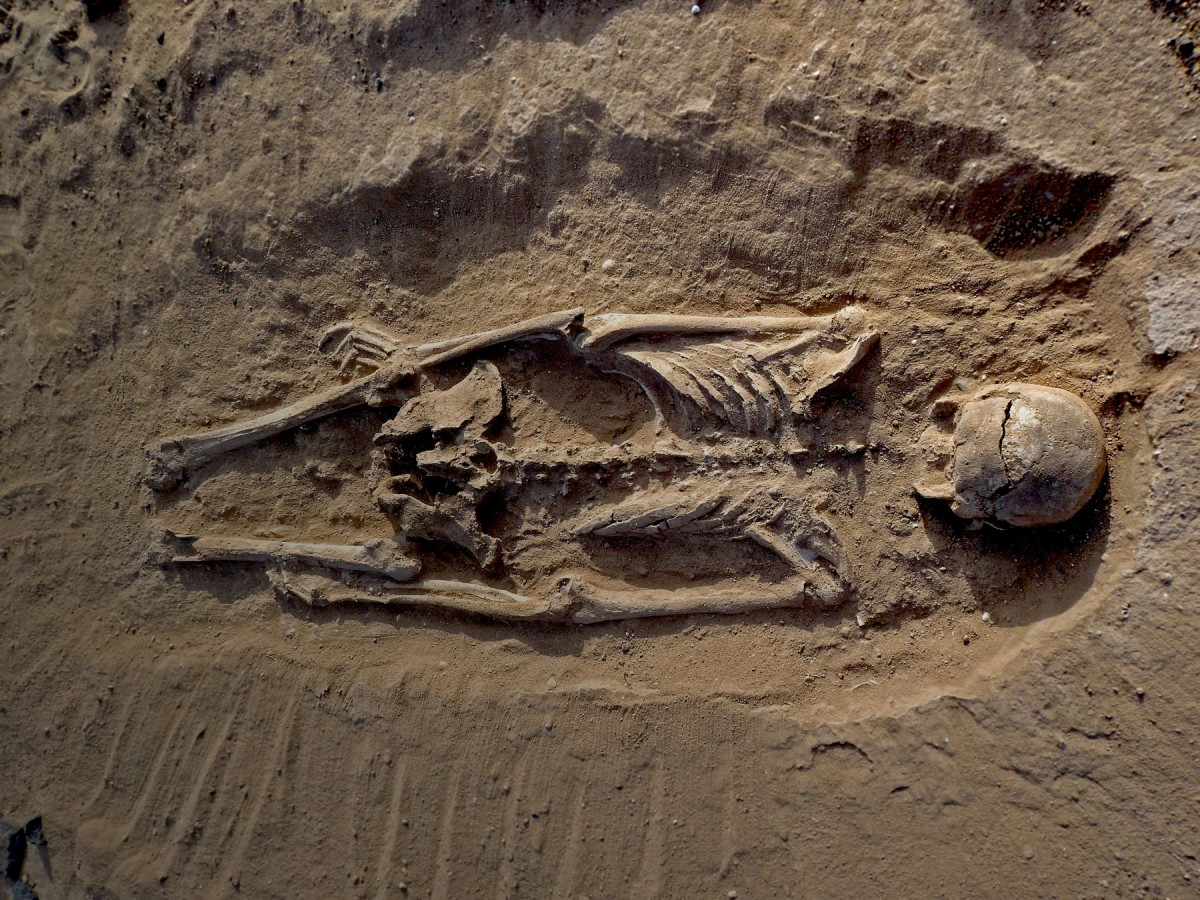 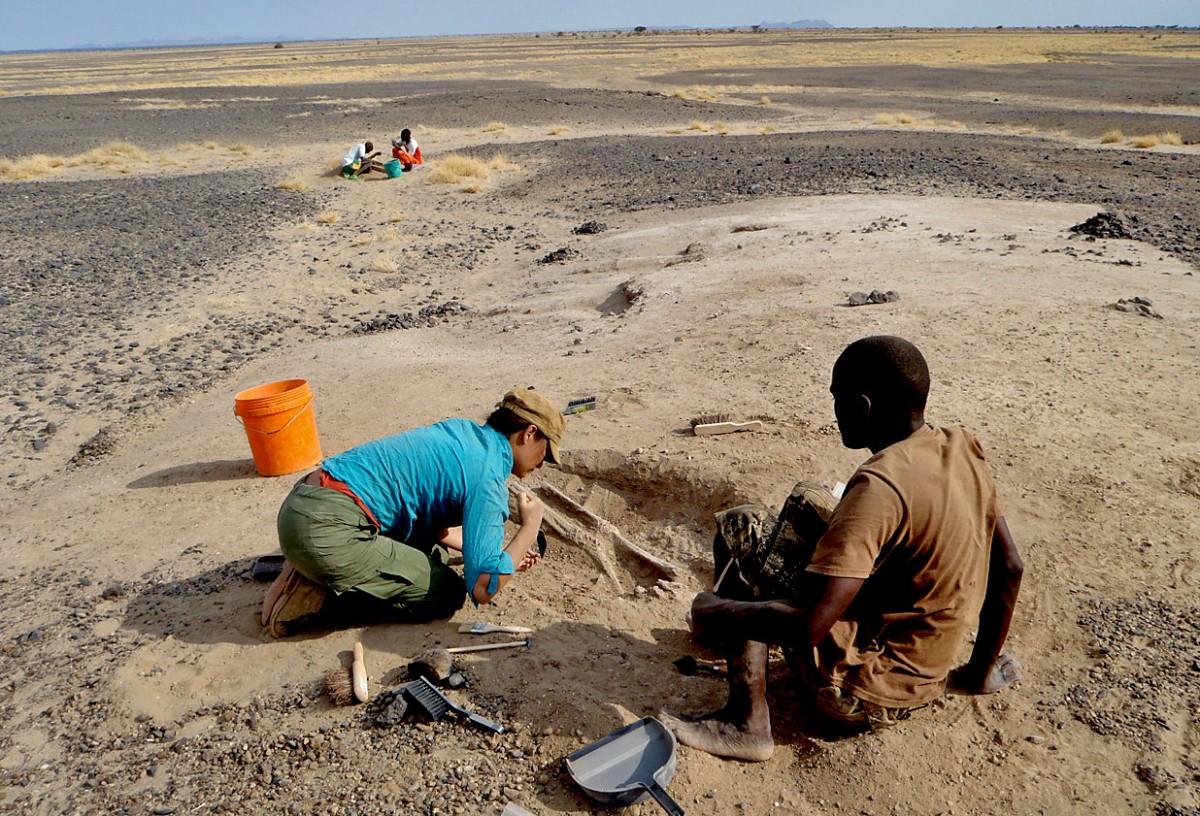 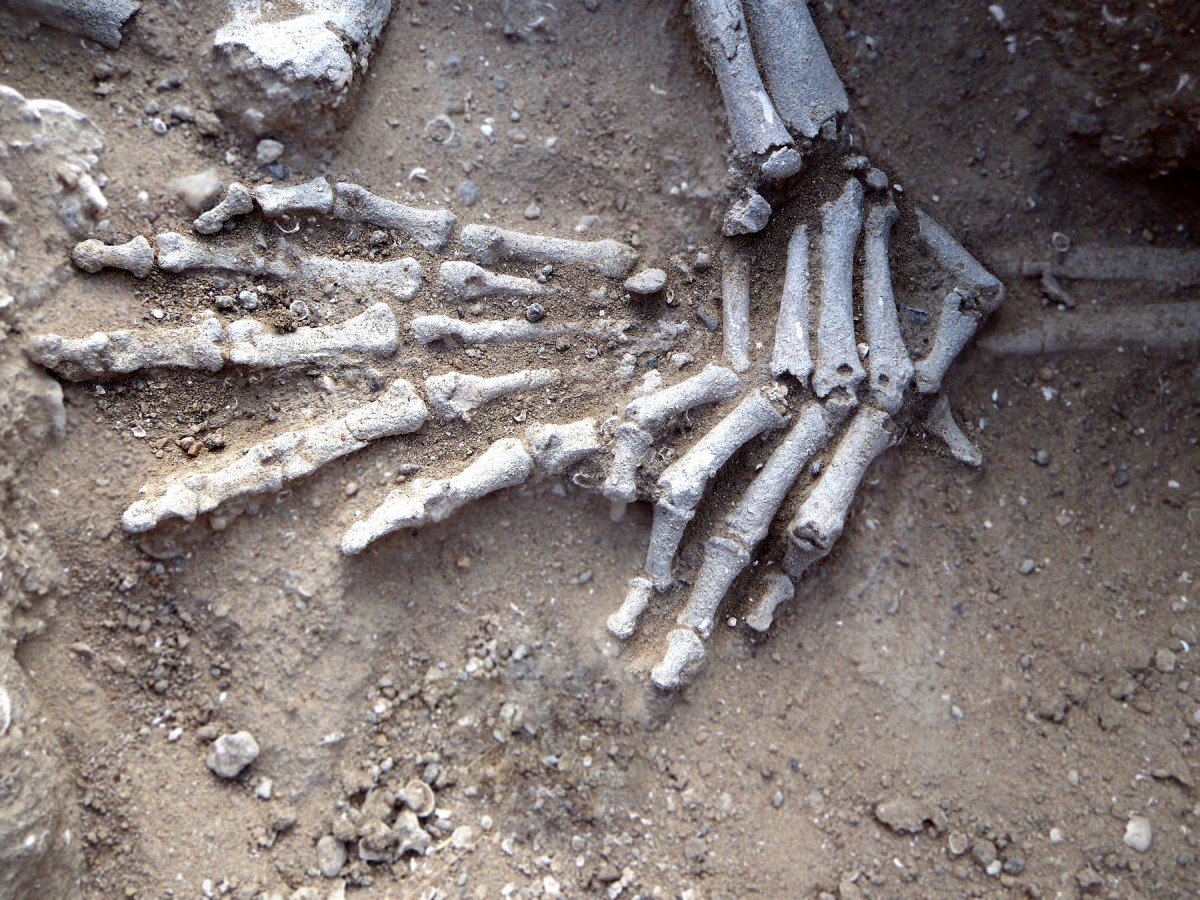 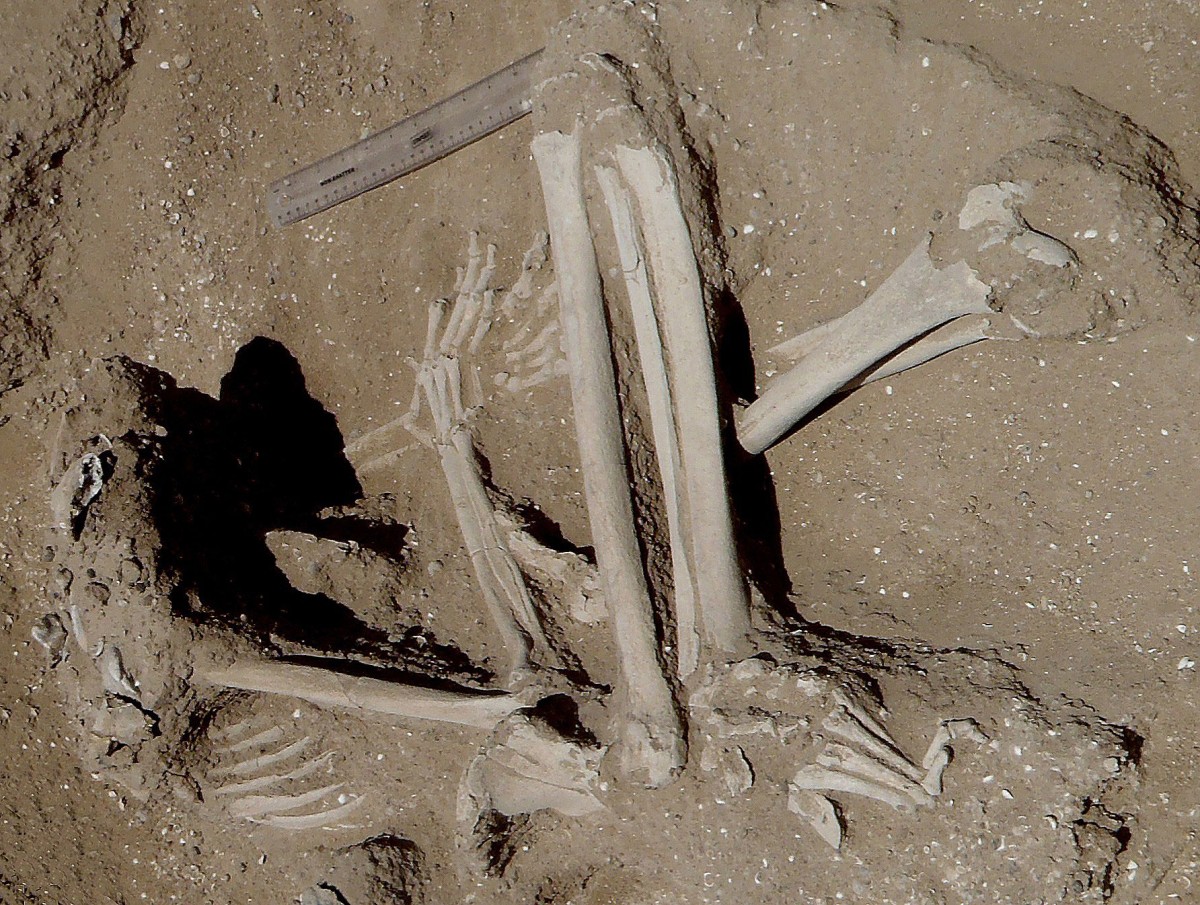 Evidence of a prehistoric massacre found in Kenya

The find extends the history of warfare

Skeletal remains of a group of foragers massacred around 10,000 years ago on the shores of a lagoon 30km west of Lake Turkana, Kenya, at a place called Nataruk is unique evidence of a violent encounter between clashing groups of ancient hunter-gatherers, and suggests the “presence of warfare” in late Stone Age foraging societies.

Twelve skeletons were in a relatively complete state, and ten of these showed clear signs of a violent death: including extreme blunt-force trauma to crania and cheekbones, broken hands, knees and ribs, arrow lesions to the neck, and stone projectile tips lodged in the skull and thorax of two men.

Several of the skeletons were found face down. Four were discovered in a position indicating their hands had probably been bound, including a woman in the last stages of pregnancy. Foetal bones were uncovered.

The bodies were not buried. Some had fallen into a lagoon that has long since dried; the bones preserved in sediment.

The findings suggest these hunter-gatherers, perhaps members of an extended family, were attacked and killed by a rival group of prehistoric foragers. Researchers believe it is the earliest scientifically-dated historical evidence of human conflict – an ancient precursor to what we call warfare.

The origins of warfare are controversial: whether the capacity for organised violence occurs deep in the evolutionary history of our species, or is a symptom of the idea of ownership that came with the settling of land and agriculture.

The Nataruk massacre is the earliest record of inter-group violence among prehistoric hunter-gatherers who were largely nomadic. The only comparable evidence, discovered in Sudan in the 1960s, is undated, although often quoted as of similar age. It consists of cemetery burials, suggesting a settled lifestyle.

“The deaths at Nataruk are testimony to the antiquity of inter-group violence and war,” said Dr Marta Mirazón Lahr, from Cambridge’s LCHES, who directs the ERC-funded IN-AFRICA Project and led the Nataruk study, published in the journal Nature.

“These human remains record the intentional killing of a small band of foragers with no deliberate burial, and provide unique evidence that warfare was part of the repertoire of inter-group relations among some prehistoric hunter-gatherers,” she said.

The site was first discovered in 2012. Following careful excavation, the researchers used radiocarbon and other dating techniques on the skeletons – as well as on samples of shell and sediment surrounding the remains – to place Nataruk in time. They estimate the event occurred between 9,500 to 10,500 years ago, around the start of the Holocene: the geological epoch that followed the last Ice Age.

Now scrubland, 10,000 years ago the area around Nataruk was a fertile lakeshore sustaining a substantial population of hunter-gatherers. The site would have been the edge of a lagoon near the shores of a much larger Lake Turkana, likely covered in marshland and bordered by forest and wooded corridors.

This lagoon-side location may have been an ideal place for prehistoric foragers to inhabit, with easy access to drinking water and fishing – and consequently, perhaps, a location coveted by others. The presence of pottery suggests the storage of foraged food.

“The Nataruk massacre may have resulted from an attempt to seize resources – territory, women, children, food stored in pots – whose value was similar to those of later food-producing agricultural societies, among whom violent attacks on settlements became part of life,” said Mirazón Lahr.

“This would extend the history of the same underlying socio-economic conditions that characterise other instances of early warfare: a more settled, materially richer way of life. However, Nataruk may simply be evidence of a standard antagonistic response to an encounter between two social groups at that time.”