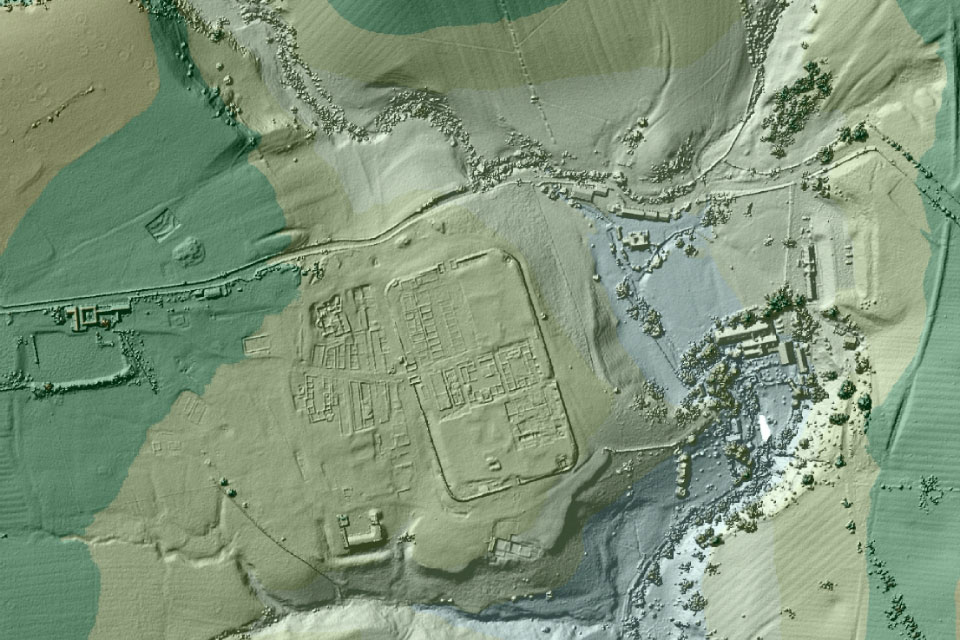 Since 1998 the Environment Agency has used lasers to scan and map the English landscape from above to help with work such as flood modelling and tracking changing coastlines. But these LIDAR (Light Detection and Ranging) data are also publically available and have been used to help with everything from building virtual worlds to managing forests.

This LIDAR data bonanza has proved particularly helpful to archaeologists seeking to map Roman roads that have been ‘lost’, some for thousands of years. Their discoveries are giving clues to a neglected chapter in the history of Roman Britain: the roads built to help Rome’s legions conquer and control northern England.

For decades after the 43AD invasion, a large region of the North (including Lancashire, Yorkshire and Cumbria) was controlled by a Celtic tribe known as the Brigantes. Tacitus writes that it was the collapse of the marriage between Queen Cartimandua of the Brigantes, a Roman ally, and her husband Venetius that led to a showdown with Rome. Following their divorce, Venetius organised a revolt in 69AD and Cartimandua fled. The Emperor Vespasian then sent a force under Britain’s new governor, Quintus Petilius Cerialis, to put down the rebellion and conquer northern England. Building roads to link up forts and settlements across this rugged landscape was a vital part of this decades-long conquest of the North.

David Ratledge has been researching Lancashire’s Roman roads for more than 45 years and recently used Environment Agency LIDAR data to discover 17km of a ‘lost’ Roman road from Ribchester to Lancaster.

“These were the county’s most important Roman sites so good communications between them must have been essential”, David Ratledge says. “Rather than following the Ordnance Survey route, it took a very sensible and economical route via Longridge and Inglewhite to Catterall, near Garstang. Here it joined the main Roman road from the south heading to Lancaster. (…) Previously in Lancashire we only had aerial photographs from the 1940s and 1960s to go on, but with photographs features only show up after a drought and we don’t get many of those! With LIDAR, once you know what to look for, it’s blindingly obvious – you just know you’ve found a road… It’s been revolutionary.”

Roman roads were large structures, typically measuring 5-7 metres wide and reaching a height of around 0.5m in the centre. However, nearly two thousand years of weathering mean that they are often very difficult to spot at ground level.

David Ratledge said: “The preservation of the remains varies massively. Parts of a road could still be half a metre high and easy to spot whilst in other parts it could be so subtle that you’d definitely miss it on the ground.”

In Cumbria, Hugh has used LIDAR data to prove the course of a road from the Roman fort at Low Borrowbridge, near Penrith, to Kirkby Thore, the site of a Roman cavalry camp. This is a missing part of a well known road called the Maiden Way that continues towards Whitley Castle and Carvoran Roman Fort, Northumbria, (near Hadrian’s Wall). LIDAR also provides evidence for a new section of this road past Kirkland.

“Often there are vague indicators of a route but not enough evidence to be sure”, explains Hugh Toller. “With LIDAR we can spot any ‘aggers’ – a Roman embankment or rampart – and if you find 2 or 3km of these running dead straight there is nothing it can be except a Roman road.”

Hugh is currently working on 4 other Roman roads in northern England discovered from LIDAR that will help to reveal more about the history of Roman Britain. These run from Whitley Castle to Corbridge, from Bainbridge in Wensleydale northwards, from Ambleside to Papcastle and from Ambleside to Carlisle. There are several other ‘lost’ roads that he plans to put back on the map.

In the future there could be many more discoveries as the Environment Agency is making all 11 terabytes of its LIDAR surveys available as open data as part of the #OpenDefra initiative. These data are available for everyone to use for free through the new Survey Open Data portal.

Martin Whitworth, Deputy Director Data, Mapping, Modelling and Information at the Environment Agency, said: “Archaeologists have been real pioneers in showing us what can be done with our LIDAR data.

“By making our LIDAR data open we hope not only to gain further insights into the past but also to inspire entrepreneurs, businesses, and communities to look to the future of how such data could be used to benefit the environment and our rural economy.

“From forest management to walking apps, building game worlds to deciding where to plant crops, the uses of LIDAR data are endless.”