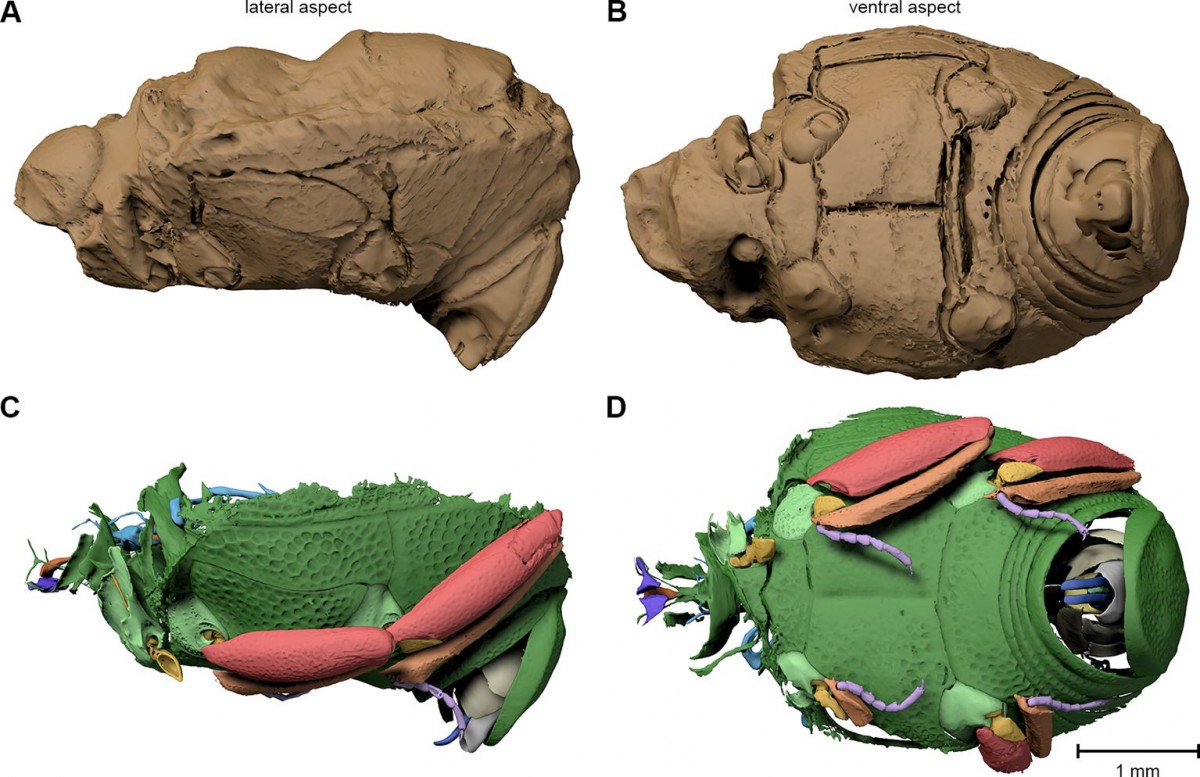 Fossils turn out to be a rich source of information

For more than 70 years, fossilized arthropods from Quercy, France, were almost completely neglected because they appeared to be poorly preserved. With the help of the Synchrotron Radiation Facility ANKA at the Karlsruhe Institute of Technology (KIT), an international and interdisciplinary team of researchers with substantial participation from the University of Bonn has now been able to X-ray the 30-million-year-old beetle fossils. The internal structures are shown in such detail that the scientists were able to create an extensive description and an evolutionary analysis of the beetles. The results of this study have now been published in the professional journal “eLIFE.”

The beetles, just a few millimeters long, come from a collection of fossilized arthropods – mainly insects – that was collected in Quercy, France more than 100 years ago. “The last time they were studied in detail was in 1944. Until now, people were mainly interested in the vertebrates from this fossil site,” says paleontologist Dr. Achim Schwermann from the Steinmann Institute at the University of Bonn. One reason the insects had been so neglected until now is that the samples outwardly seemed poorly preserved.

With the help of modern imaging methods, however, their internal structures could now be unlocked. The researchers analyzed the fossils in the Synchrotron Radiation Facility ANKA at the Karlsruhe Institute of Technology (KIT), using X-ray computed tomography. That allowed them to create a three-dimensional image of the insides of the opaque fossils. “The actual measurement process only took a few seconds,” explains engineer Tomy dos Santos Rolo from the KIT in Karlsruhe. “During that time, the object is rotated in the path of the X-ray and imaged from various directions. After the measurement, we can digitally reconstruct the three-dimensional object.”

Reconstruction allows for a modern description

This digital reconstruction of one beetle-specimen quickly showed that it was a male animal. “The genitals have been preserved, for the most part,” says biologist Dr. Heiko Schmied from the University of Bonn. “That gives us an opportunity to describe the beetle as a representative sample according to modern standards.” Beetle species in particular are often classified based on the shape of their genitalia. An evolutionary analysis allowed the researchers to re-evaluate how the fossilized beetle species fit into the family of hister beetles (Histeridae), a family that still exists today. “I have never seen the inside of a hister beetle in such detail before,” remarks Dr. Michael Caterino from Clemson University, South Carolina. In addition to the well-preserved genitalia, this specimen also shows mouth parts and the throat, the gastrointestinal tract and the complex respiratory system.

“A diamond in the rough”

The scientists discovered that the outwardly unpromising beetle fossils had internal organs that were amazingly well preserved. The precise detail in the fossilized beetles goes well beyond what is normally seen in fossilized arthropods. “The unusually well-preserved soft tissue shows that the beetles must have become petrified within a very short amount of time, probably hours or days,” explains Dr. Schwermann.

One beetle specimen that is partly embedded in the rock shows the outer structure of the carapace. The attached rock thus conveys what the beetle’s outer shell originally looked like. “Surprisingly, the beetle that looks the least well preserved from the outside has the best level of preservation inside,” says biologist Dr. Thomas van de Kamp from the KIT in Karlsruhe. The attached rock protected even its fragile extremities from being destroyed by external environmental influences.

While the fossilized arthropods from Quercy in France were considered less interesting during their initial study in the 1940s, this old collection turns out to be a rich source of information. “That makes us, as researchers, look at the old collections in museums and universities in a new way,” says Dr. Schwermann. The research team now plans to study other similarly preserved fossils. The fact that the Quercy beetles had been largely ignored for 70 years highlights the unrecognized potential of old collections.