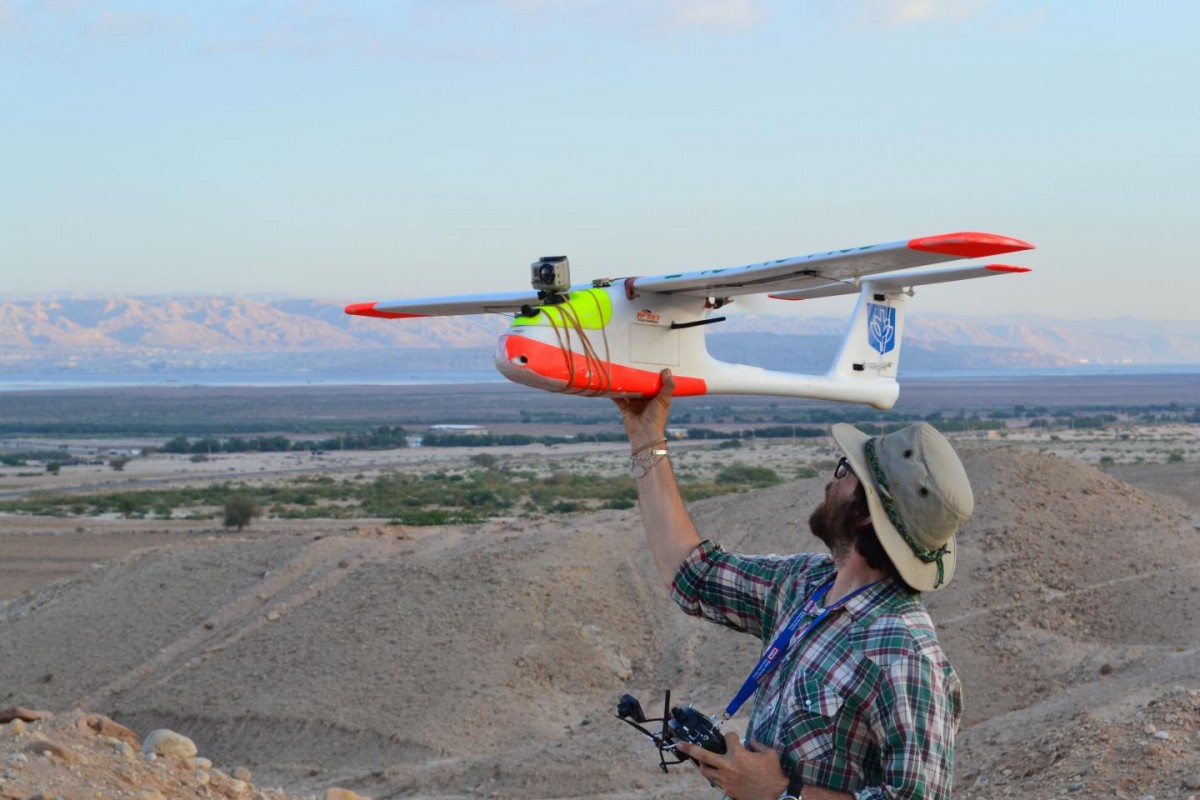 Drones for research: DePaul University archaeologist to explain UAV use at Fifa

A holistic approach combining archaeology, ethnography and the drones

The use of unmanned aerial vehicles —drones— to document and monitor a ravaged landscape on the Dead Sea Plain in Jordan for the past three years reveals that looting continues at the site, though at a measurably reduced pace, according to a DePaul University archaeologist.

“Drones are proving to be powerful new tools to archaeologists for documenting excavation, mapping landscapes and identifying buried features. They also can be applied to monitor site destruction and looting in the present,” said Morag M. Kersel, an assistant professor of anthropology at DePaul.

Kersel, whose research focus is on trade and antiquities, discussed how drones are an emerging tool for archaeology during a presentation Feb. 14, 2016 at the annual meeting of the American Association for the Advancement of Science. Kersel’s presentation, “UAVs for Site Documentation and Monitoring,” is part of a session that examines the protection of cultural heritage sites and artifacts.

“Three seasons of monitoring at Fifa have demonstrated that UAVs can provide quantifiable evidence for the rate of ongoing site damage, even in contexts where other remote sensing systems would provide insufficient data,” said Kersel.

“Between 2013-14, we had 34 new looting episodes —holes— clearly people were still looting. In the next year, there’s very little or no evidence of looting. Why?” Kersel said. “Is it because there is no demand Early Bronze Age ceramics?

“An element of the ongoing research is the examination of why looting has abated? Are there no more graves to loot? Have looters found more lucrative financial resources? Are the Department of Antiquities and NGO initiatives working?” she asked.

Combining clues from the air and on the ground

Kersel is co-director of the Galilee Prehistory Project and the Follow the Pots Project, tracing the movement of Early Bronze Age pots from the Dead Sea Plain in Jordan.

“Part of what we do is the drone flyovers. But another part of this project is ethnographies with people on the ground. We treat all stakeholders with a vested interest in the site with the same intellectual curiosity, which means we interact with and learn from local populations, dealers, collectors, looters, government employees, archaeologists, museum professionals, tourists, and customs agents.

“Ours is a holistic approach to the landscape, which combines archaeology, ethnography and the drones,” Kersel said.

Archaeologists for years have been using satellite images to quantify the number of looted graves. “Comparing satellite images with the lunar-like landscape of Fifa led us to the revolutionary idea of using drones to gather data with higher resolution from areas of our own choosing,” Kersel explained.

Today, she and colleague Austin Hill of the University of Connecticut use a small fixed wing plane equipped with a Canon camera inside the belly and a GoPro mounted on the front, and a DJI rotary wing hexacopter or quadcopter, which provide the platforms for stable, low elevation aerial photography, making it possible to both document looting and destruction at Fifa as well as generate spatial data for digital mapping.

Global science engagement is the theme for this year’s annual meeting of the American Association for the Advancement of Science. It focuses on how the scientific enterprise can meet global challenges in need of innovation and international collaboration.

“Our comprehensive approach to the landscape, which includes groundtruthing, ethnographic interviews, cooperative efforts with the Jordanian Department of Antiquities, and drones are key to safeguarding and recording what remains of this Early Bronze Age mortuary site,” said Kersel. “This research reinforces the power of drones in site monitoring and documentation as part of future protection strategies.”