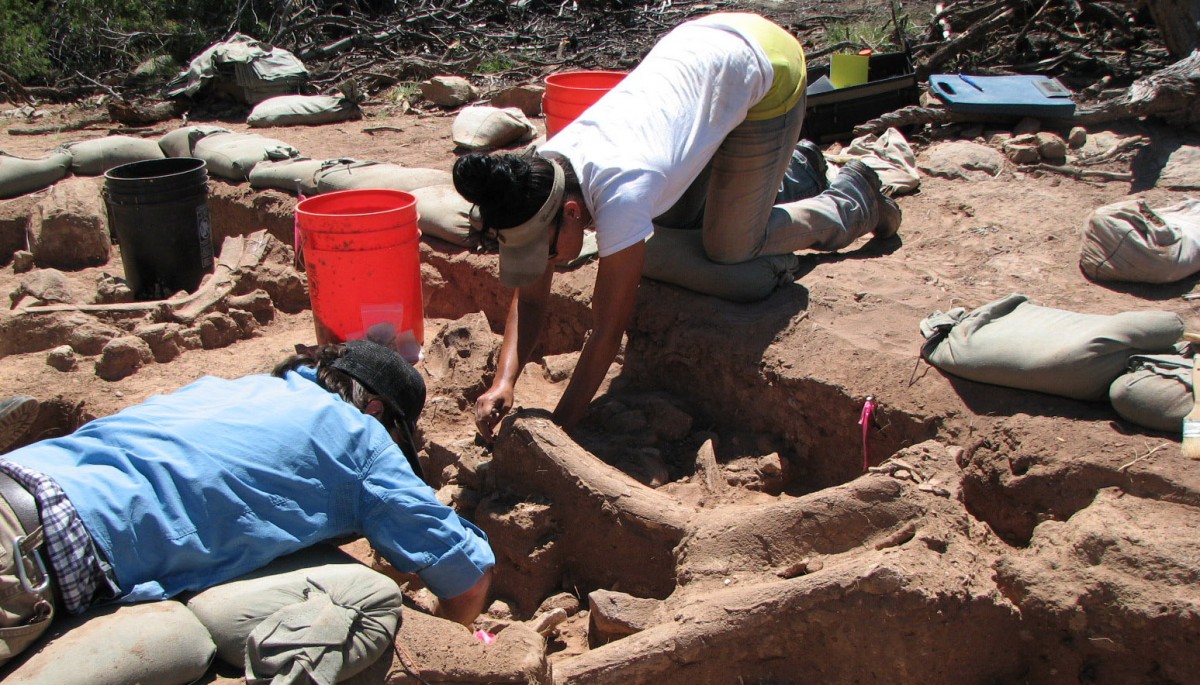 An afternoon walk and a mammoth find

It began with a man walking along a shallow wash near Abiquiu, New Mexico one afternoon and noticing some flakes of what looked like bone. He happened to be walking near the property line, maybe on his neighbor’s property. So he went to visit his neighbor, to tell him about the find.

His neighbor, Tim Rowe, happened to be a vertebrate paleontologist at the University of Texas in Austin and knew something about old bones. Together they walked to the shallow wash to take a closer look. They found some very big ribs near the edge of the wash and teeth that clearly came from some elephant-like creature. But the only time elephant-like creatures ever roamed New Mexico was about 13,000 years ago when mammoths grazed the plains of eastern New Mexico. No one has ever found a mammoth in the high country.

“The bones are just chunks and fragments”

Abiquiu is a place of sweeping vistas, dramatic mountains and the colors that dazzled artist Georgia O’Keefee. At 6,200 feet above sea level, it’s a wild place, with very little urban development — the kind of place where a very large creature could die and leave bones that were virtually undisturbed for thousands of years.

This is just the kind of thing that interests University of New Mexico Professor of Anthropology Bruce Huckell. “Tim contacted me and said I’ve got this mammoth eroding out on my property and I would be interested to know if you would like to take a look. I said sure, and he said by the way my neighbor found an arrowhead near the bones, so I’ll send you a picture of that.”

Huckell hurriedly opened the email before he ran out the door to a faculty meeting and saw a little broken, reworked Clovis point, which is exactly what you might expect to see associated with a mammoth.

“The bones are just chunks and fragments, but it was clear they were from some sort of an elephant-like creature,” said Huckell “And in scratching around along the edges of this little wash, they found a group of three rib fragments that were all just kind of laid together. A little further to the north, they found an erosionally truncated piece of a tusk, which they followed and that connected to the anterior part of the skull.”

The unexpected thrill of finding an ancient mammoth that humans might have hunted and killed has now turned into the exacting work of documenting the find. A National Science Foundation grant has helped pay for the work of excavating the site and documenting the find. Pieces of bone have been sent to a specialist for radiocarbon dating.

Anthropologists think the Clovis people were the earliest humans in North America. They lived about 13,000 years ago. They hunted big game, such as the Columbian mammoth, a southern cousin of the more famous wooly mammoths and they traveled extensively, especially in the Southwest. Their distinctive fluted spear points have been found throughout New Mexico.

Much of what is known about the Clovis people comes from an archeological site near the town of Clovis in eastern New Mexico. At the Blackwater Draw, the Clovis people killed and butchered several mammoths, leaving evidence of their existence, their hunting skills and their beautiful spear tips in one place.

This would be the second time Clovis artifacts have been found in conjunction with a mammoth.

This is the kind of find that intrigues funding entities and Huckell, along with two UNM professors from the Earth and Planetary Sciences Department, Leslie McFadden and Grant Meyer received a National Science Foundation High Risk Research Proposal to excavate the mammoth.

It’s a wonder the mammoth, which they think is a juvenile, was preserved at all because it fell in a place that was vulnerable to the elements, on a little shelf of land between two deep arroyos.

“The bones were buried in a very small stream channel, not much bigger than a person could jump across,” Meyer said. “Even more unusual is the channel location: it is perched on the side of a steep canyon. Landslides occurred here sometime during the last episode of Pleistocene ice ages, when mountain glaciers grew in the high Sangre de Cristo Mountains and the climate was colder and wetter in New Mexico.”

Clovis people arrived in the final stage of this period. The landslide formed benches along the canyon side, and downslope drainage was diverted along the bench where the mammoth was found. A muddy flood down this drainage buried the mammoth bones, but thereafter, flow was diverted off the bench, leaving the bones protected from later erosion – despite their very shallow interment.

A chain of serendipitous events

“The bones aren’t really articulated. They are there in a jumble, but it looks like pretty soon after the animal was de-fleshed that this little flood came along and put the bones into this channel,” said Huckell.

The researchers are seizing an unexpected opportunity to learn more about the Clovis people. Huckell says they are looking seriously at the question of how much of the mammoth meat the Clovis people actually used once they made a kill. A ton or so of mammoth is a huge amount for hunters to handle. He and his graduate students are comparing information they have from this site, with information from other mammoth kills to try to determine an answer.

He is also seeking a better answer to a question that has long been debated among anthropologists. Flakes of bone were found at the site, but it’s not clear whether that is part of a natural weathering process, whether another animal came along and gnawed or broke the bones or whether the flaking was something done by the hunters as they butchered the animal.

In all, this research is thanks to a chain of serendipitous events.

Huckell said, “The odds of it getting buried and staying buried are real slim. The odds of the property being drawn as it was and being purchased by a vertebrate paleontologist are vanishingly small and then the possibility that that animal met its end and/or was utilized by Clovis people sort of completes the chain of improbable events.”

Most of the excavation was completed last summer, but the research group will be back in Abiquiu in June to complete the excavation portion of the project. Four graduate students have already worked on the project with the professional researchers. This kind of opportunity is usual in the UNM Department of Anthropology, Huckell said graduate anthropology students at UNM have an excellent chance of working directly on research that offers them a chance to explore first-hand the very ancient history of New Mexico.