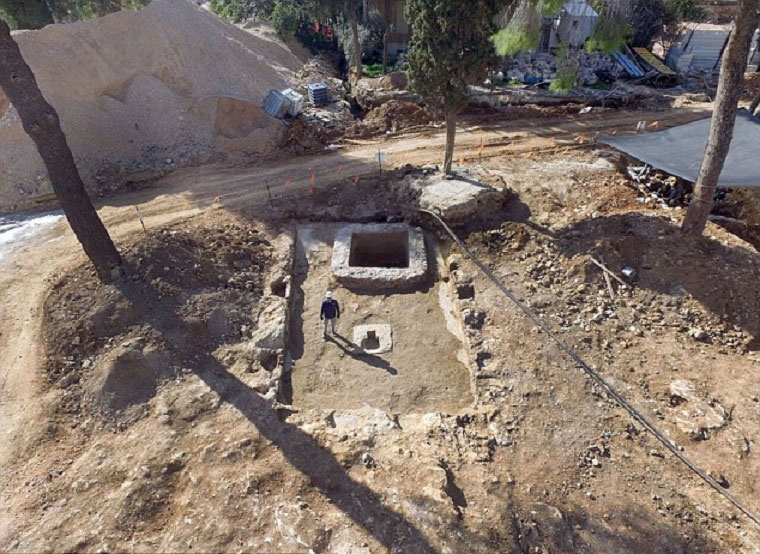 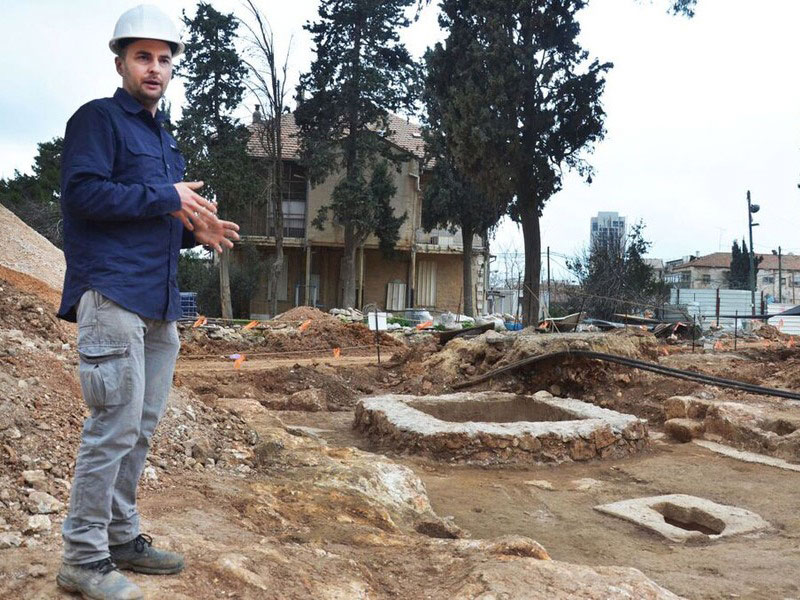 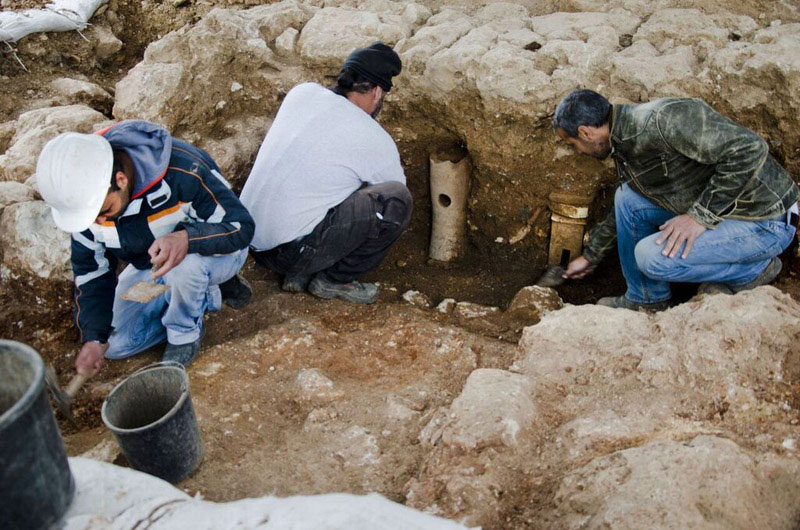 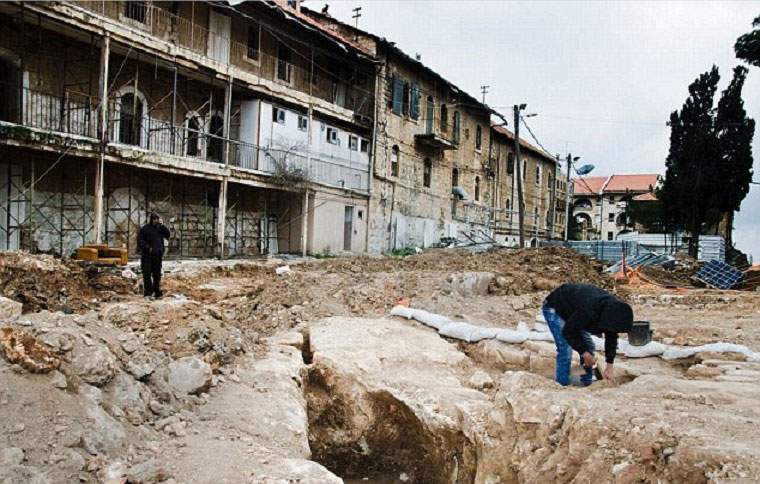 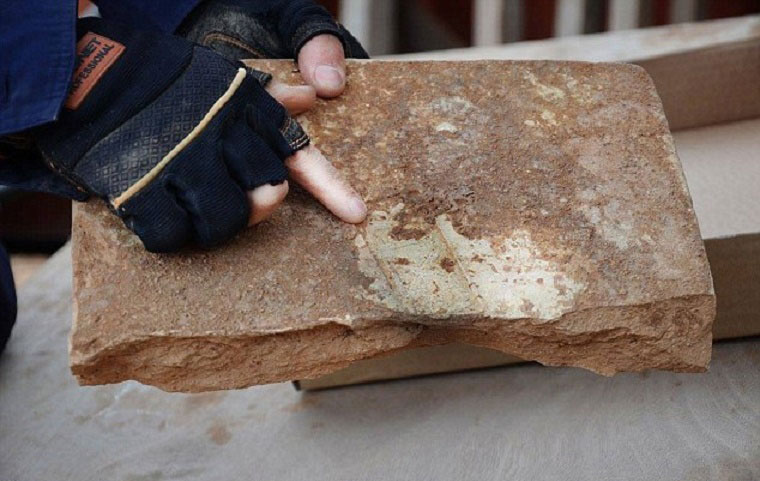 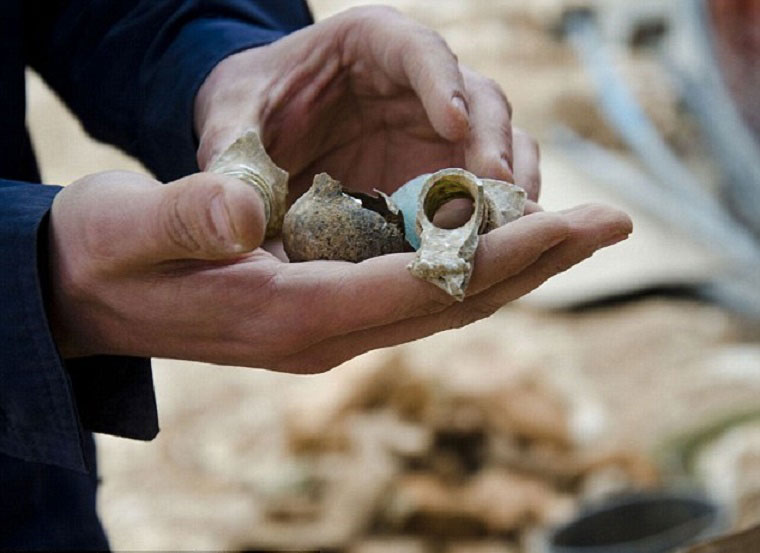 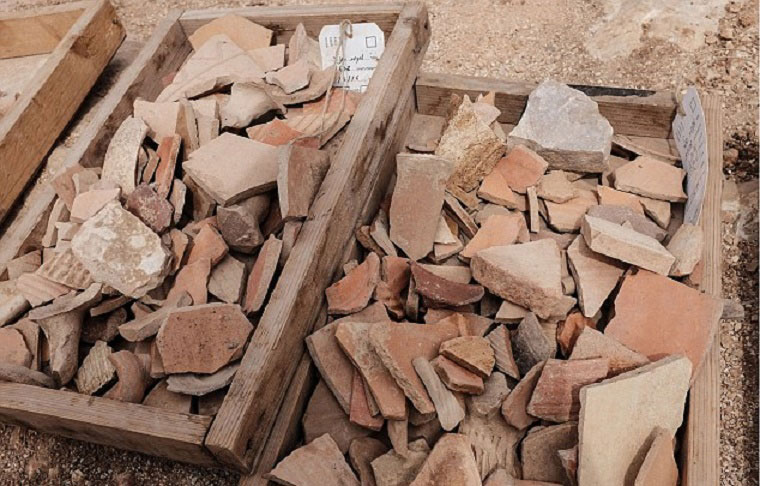 Winery and Bathhouse Discovered in Jerusalem

Unexpected finds more than 1,600 years old were uncovered during archaeological excavations financed by the Merom Yerushalayim Company, which the Israel Antiquities Authority is carrying out in Schneller Compound prior to the construction of residential buildings for Jerusalem’s ultra-orthodox population.
Schneller Orphanage operated in Jerusalem from 1860 until the Second World War. During the British Mandate, its German inhabitants were expelled and a military base was established there. After the British withdrawal in 1948 the compound was turned over to the Hagana and later served as an army base used by the Israel Defense Force until 2008.
Interesting and assorted finds from Jerusalem’s past were discovered in the archaeological excavation, most notably a large and impressive winery dating to the Roman or Byzantine period, some 1,600 years ago. The complex installation includes a pressing surface paved with a white mosaic. In the centre of it is a pit in which a press screw was anchored that aided in extracting the maximum amount of must from the grapes. Eight cells were installed around the pressing surface. These were used for storing the grapes, and possibly also for blending the must with other ingredients thereby producing different flavours of wine. The archaeologists believe that this winery served the residents of a large manor house whose inhabitants made their living by, among other things, viticulture and wine production.
Evidence was unearthed next to the impressive winepress which indicates the presence of a bathhouse there. These finds included terra cotta pipes used to heat the bathhouse and several clay bricks, some of which were stamped with the name of the Tenth Roman Legion. This legion was one of four Roman legions that participated in the conquest of Jewish Jerusalem, and its units remained garrisoned in the city until c. 300 CE. Among the Roman legion’s main centres was the one in the vicinity of Binyanei Ha-Uma, located just about 800 meters from the current excavation, where a large pottery and brick production centre was situated. The archaeologists suggest that the Schneller site, in the form of a manor house, constituted an auxiliary settlement to the main site that was previously exposed at Binyanei Ha-Uma. As was customary in the Roman world, here too in the Schneller Compound, a private bathhouse was incorporated in the plan of the estate.
The current archaeological exposure is actually a continuation of the salvage excavations that were carried out at the site half a year ago when evidence was uncovered there of a Jewish settlement that dated to the Late Second Temple period.
According to archaeologist Alex Wiegmann, excavation director on behalf of the Israel Antiquities Authority, “Once again, Jerusalem demonstrates that wherever one turns over a stone ancient artefacts will be found related to the city’s glorious past. The archaeological finds discovered here help paint a living, vibrant and dynamic picture of Jerusalem as it was in ancient times up until the modern era”.
According to Amit Re’em, the Jerusalem district archaeologist, “This is an excellent example of many years of cooperation and deep and close ties with the Haredi community. The general public is used to hearing of the clashes between the archaeologists and the orthodox community around the issue of the graves, but is unaware of the joint work done on a daily basis and the interest expressed by the ultra-orthodox sector. The Israel Antiquities Authority is working to instil our ancient cultural heritage in this population, as it does with other sectors”.