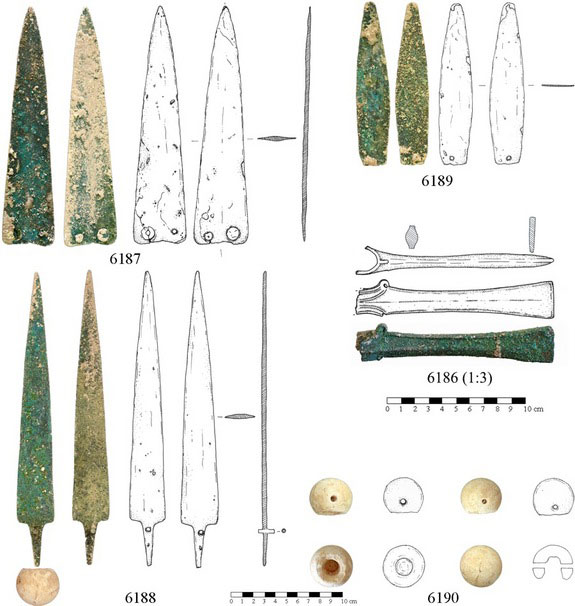 The findings provide evidence of a thriving settlement

A team of Italian and Palestinian archaeologists have discovered an ancient necropolis with more than 100 tombs near Bethlehem. Though many of the tombs have been looted the findings provide proof for the first time that there was a nearby city that thrived in Caananite times.

The site was discovered in 2013, during works for the construction of an industrial park. Some of the tombs were excavated in 2014, and in 2015 the joint team found that more than 100 tombs were part of the necropolis between 2200 and 650 BC. The place, which today is called Khalet al-Jam’a, was probably the cemetery of a nearby settlement, of unknown precise location.

Among the findings at the site there are artefacts typical of burials, such as carinated bowls, small shouldered bowls, lamps, Cannanite jars, bronze daggers and spearheads. The tombs include chambers cut on the rocky hillside, taking advantage of natural cavities. One of the daggers is a Mycenaean type of the late Bronze Age.

Human remains have also been found along with grave goods. A 3,000-year-old tomb, included the remains of a man, woman and child, buried with two bronze daggers and a variety of ceramic pots. Another tomb contained a nearly complete male skeleton buried with a ceramic lamp probably dating to more than 4,000 years ago. Another intriguing tomb contained two “Hyksos-like” signet amulets, known as scarabs. It’s possible that, rather than being imported from Egypt, the scarabs were made locally. They show the direct interconnection and contiguity between the ruling class in southern Palestinian cities and the Pharaonic court reigning in Tell el-Dab’a, ancient Avaris, the Hyksos capital of Egypt between 1750BC-1650BC, said Lorenzo Nigro, head of the excavation and professor at Sapienza University of Rome.

The necropolis stopped being used around 650 B.C. while the name Bethlehem stopped appearing in ancient documents for several centuries until reappearing around the time of Christ.