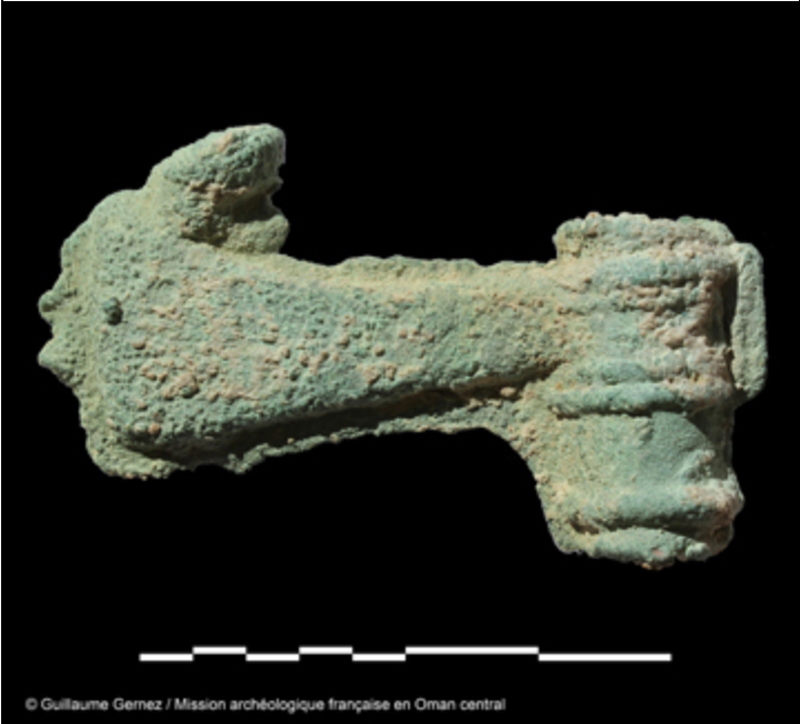 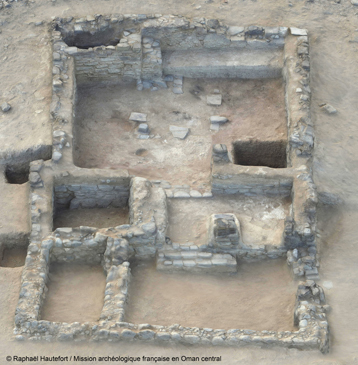 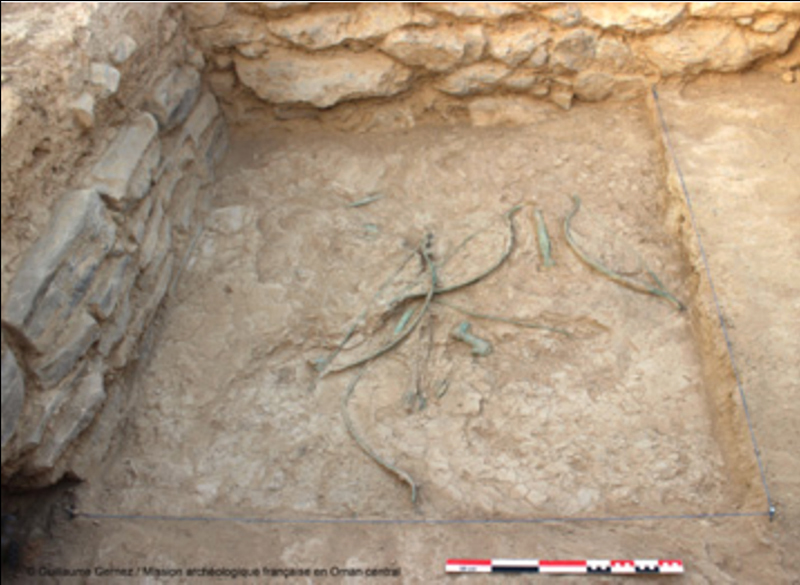 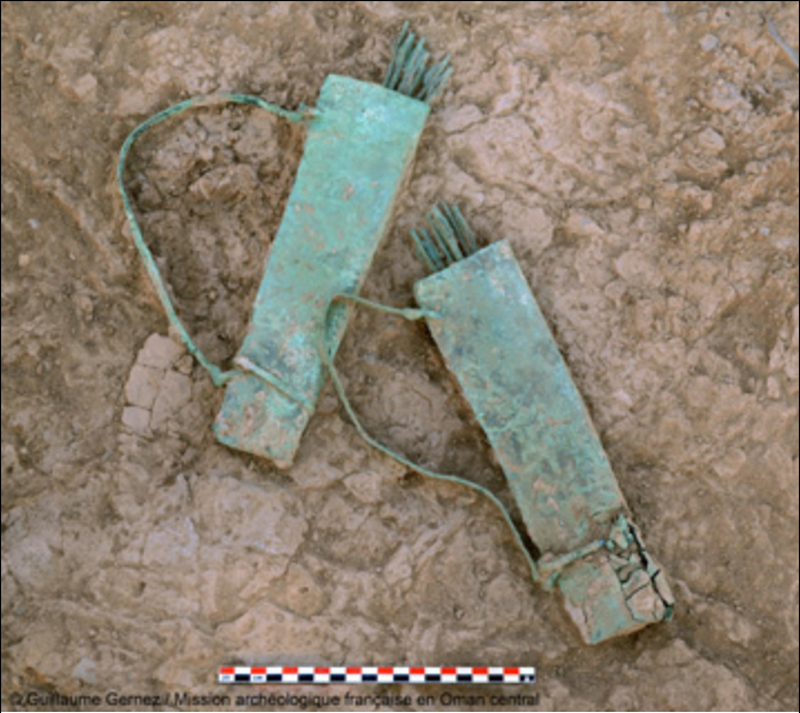 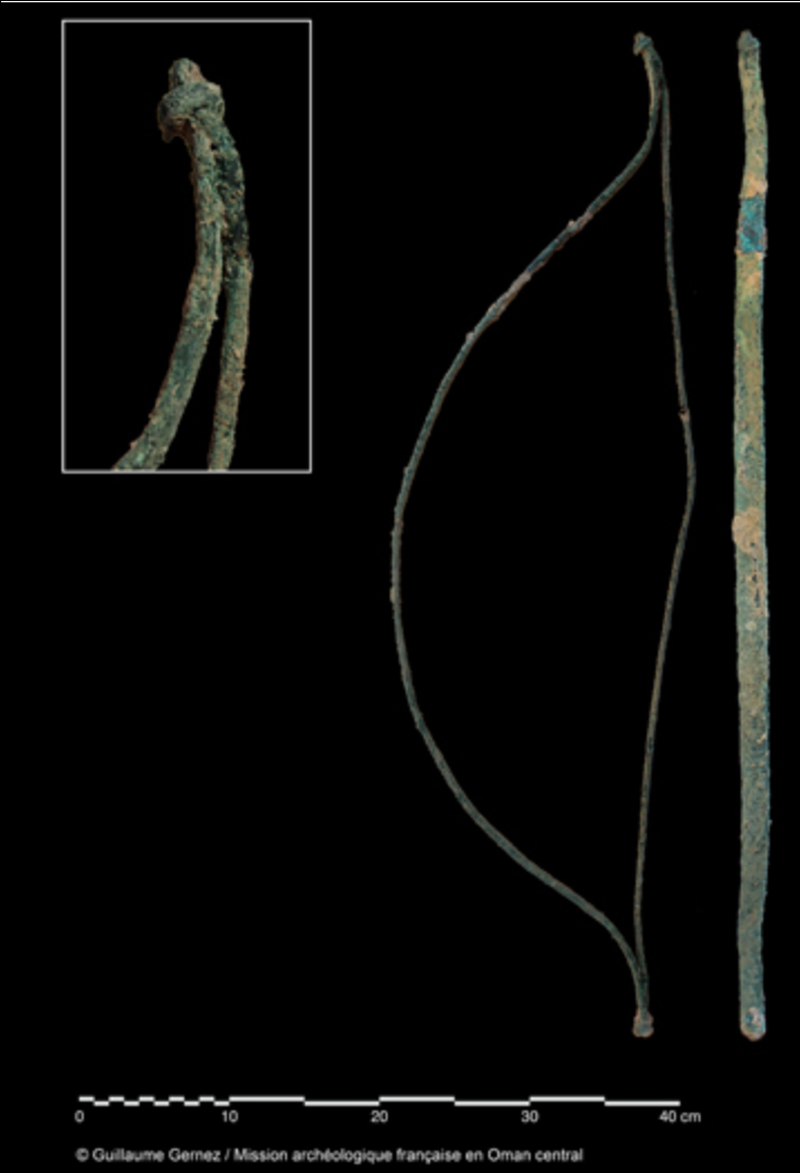 Dating from the Iron Age II

An exceptional collection of bronze weapons dating from the Iron Age II (900-600 BC) has been uncovered near Adam, in the Sultanate of Oman. The remains were discovered scattered on the ground in a building belonging to what is thought to be a religious complex, during excavations carried out by the French archaeological mission in central Oman. In particular, they include two complete quivers and weapons made of metal, including two bows, objects that are for the most part non-functional and hitherto unknown in the Arabian Peninsula. Additional archaeological research, which began in 2011 in the region, will be needed to elucidate the political system, social practices and rituals existing in the Arabian Peninsula at the time.

The region of Adam is located at the frontier between Oman’s oasis and desert regions. It was completely unexplored from an archaeological point of view until the French archaeological mission in central Oman (formerly French archaeological mission in Adam), headed since 2011 by Guillaume Gernez, carried out its first explorations in 2007. Discovered in 2009, the site known as Mudhmar East consists of two main buildings and several additional facilities. It is located at the foot of Jabal Mudhmar, near one of the largest valleys in Oman and at a strategic crossing of several trade routes.

With a length of 15 meters, the larger of the two buildings is located on the slope of Jabal Mudhmar and is made of cut sandstone blocks and earth bricks. It is in this building, in a small, apparently doorless room, that the team uncovered an exceptional collection of bronze weapons. Dating from the Iron Age II (900-600 BC), these objects appear to have fallen off furniture or shelves on which they were placed. Alternatively, they may have hung on the walls of the room.

Within this collection of objects, two especially remarkable groups stand out. The first one consists of two small quivers entirely made of bronze, including the six arrows contained in each of them. Given their size (35 cm), these were small-scale models imitating the original objects made of perishable materials (leather), which are not usually found in archaeological excavations. The fact that they are made of metal implies that they were non-functional. Quivers of this kind have never been found in the Arabian Peninsula, and are extremely rare elsewhere.

The second group comprises metal weapons, which were mostly non-utilitarian (given their slightly reduced size, material and/or unfinished state). They consist of five battle-axes, five daggers with crescent-shaped pommels (characteristic of the Iron Age II), around fifty arrowheads, and five complete bows. The bows are made up of a flat, curved bowstave bent at both ends, which are connected by a string made of bronze. The size of the bows (70 cm on average), and above all the material used, shows that they were imitations of bows made of perishable materials (wood and tendons). Objects of this type have never been found before: bows made of metal were totally unknown in the Arabian Peninsula and the Middle East until now.

This exceptional discovery provides new information about weaponry during the Iron Age in the eastern Arabian Peninsula and about social practices at the time. The non-utilitarian nature of most of the weapons may indicate that they were designed to be offered to a deity of war, and/or as a key element in social practices not yet understood by the archaeologists. The first hypothesis is reinforced by the presence in the site’s second building of several fragments of ceramic incense burners and small bronze snakes, objects often associated with ritual practices at that time. Future excavations should provide a better understanding of the role of the complex, which intrigues archaeologists.

This collection of weapons was formed at a time when metallurgical production was on the rise in the eastern Arabian Peninsula during the Iron Age. This economic and technical development went hand-in-hand with an increasingly complex society, as shown by the proliferation of fortified sites and monumental architecture. However, understanding the political system and social structure of this pre-literate society remains a difficult task. Continued archaeological exploration of the site and its immediate surroundings, as well as of the central region of Oman, will be key to reconstructing the dawn of history in the Arabian Peninsula.