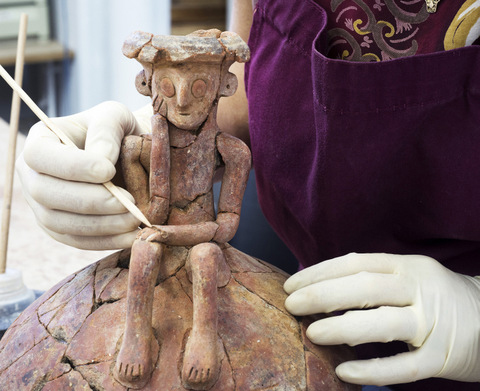 3,800-year-old “thinker” attached to a pot unearthed in Yehud

A 3,800-year-old “thinker” figurine attached to a Middle Bronze Age was unearthed in Yehud/Israel.

The vessel was discovered together with daggers, an axe head and arrowheads that were apparently buried as funerary offerings for one of the respected members of the ancient settlement.

The small extraordinary jug from the Middle Bronze Age was revealed during an Israel Antiquities Authority excavation that was recently conducted in the city of Yehud prior to the construction of residential buildings.

According to Gilad Itach, excavation director on behalf of the Israel Antiquities Authority, “It literally happened on the last day of the excavation when right in front of our eyes and those of the excited students an unusual ceramic vessel c. 18 cm high was exposed, that bears the image of a person”. Archaeologists believe that at first the jug, which is typical of the period, was made, and afterwards the unique sculpture was added. The statuette has no parallel. The level of precision and attention to detail in creating this almost 4,000 year old sculpture is extremely impressive. The neck of the jug served as a base for forming the upper portion of the figure, after which the arms, legs and a face were added to the sculpture. The face of the figure seems to be resting on its hand as if in a state of reflection. It is unclear if the figurine and the jug were made by the same person, Itach added.

In addition to the unique pottery vessel, other vessels and metal objects were found such as daggers, arrowheads, an axe head, also sheep bones and what are very likely the bones of a donkey. According to Itach, “It seems that these objects are funerary offerings that were buried in honor of an important member of the ancient community. It was customary in antiquity to believe that the objects that were interred alongside the individual continued with him into the next world. To the best of my knowledge such a rich funerary assemblage that also includes such a unique pottery vessel has never before been discovered in the country”.

In addition, a variety of evidence regarding the kind of life in the area 6,000 years ago was exposed – among other things, pits and shafts were revealed that contained thousands of fragments of pottery vessels, hundreds of flint and basalt implements, animal bones, and a churn which is a unique vessel that was widely used in the Chalcolithic period for making butter.