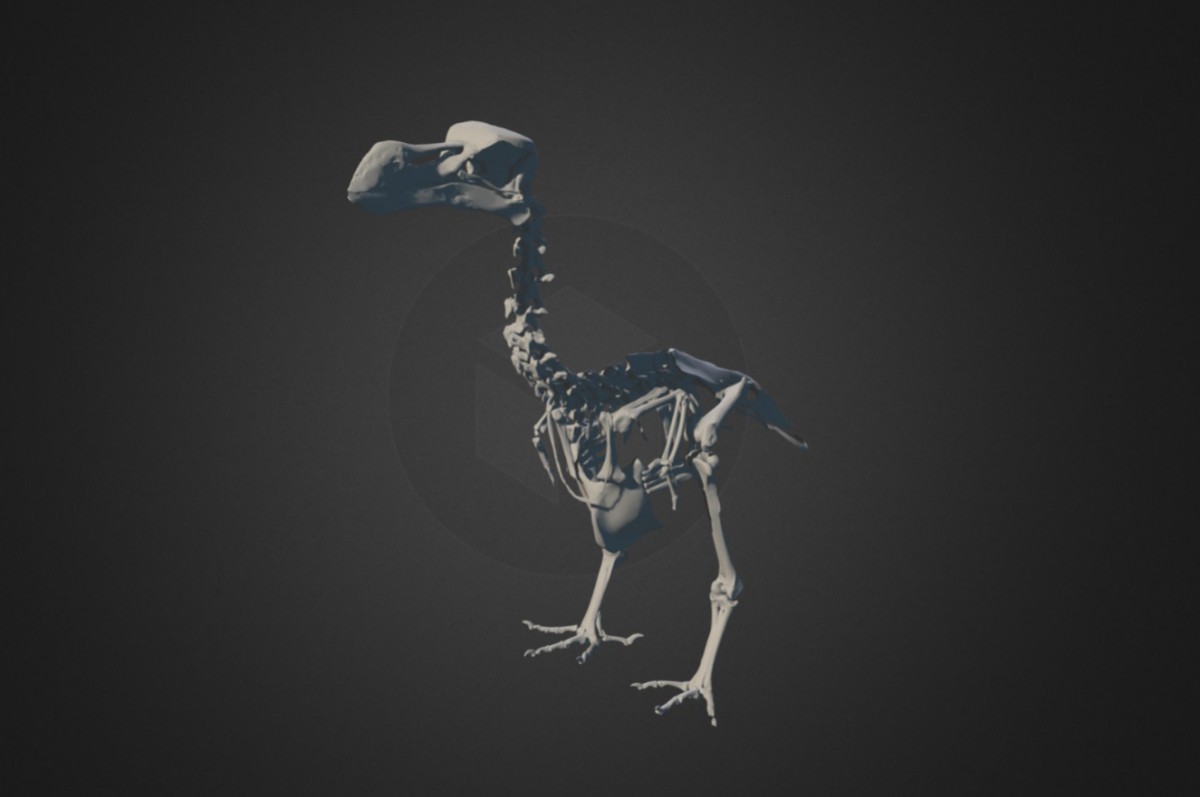 The first 3-D atlas of the extinct dodo

The dodo represents one of the best-known examples of extinction caused by humans, yet we know surprisingly little about this flightless pigeon from a scientific perspective. Now, for the first time since its extinction, a 3-D atlas of the skeletal anatomy of the dodo has been created, based upon two exceptional dodo skeletons that have remained unstudied for over a century. This atlas, published as the fifteenth Memoir of the Society of Vertebrate Paleontology, represents the culmination of nearly five years of work and thousands of man-hours of digital investigation on the only two associated, near-complete skeletons of the dodo in existence. Published 150 years after Sir Richard Owen’s first scientific description of dodo anatomy, based on incomplete, composite skeletons, the new atlas is the first to show accurate relative proportions and to describe several previously unknown bones of the dodo skeleton, including knee caps, ankle and wrist bones. The atlas opens new pathways for the investigation of the paleobiology and evolution of what may arguably be one of the most famous, yet surprisingly poorly known animals that went extinct in recent human history.

The dodo skeletons described in this Memoir were discovered more than a century ago by an amateur naturalist, Etienne Thirioux, who was a barber by trade. Sadly, Thirioux’s exceptional discoveries never received the attention they deserved, and have never been described scientifically before. The Thirioux skeleton housed in the Mauritius Institute represents the only known complete dodo skeleton, and the only one comprising the bones of a single individual. The second Thirioux specimen, now housed in the Durban Natural Science Museum, is nearly complete but may have been assembled from the remains of more than one bird. In contrast, all other known dodo skeletons are incomplete and typically made up from the bones of many different individuals. Our anatomical atlas of the Thirioux skeletons, produced using modern techniques such as 3D laser surface scanning, opens a new window into the ecology of this iconic extinct bird.

The dodo (Raphus cucullatus), an extinct, giant flightless pigeon once endemic to the island of Mauritius, may arguably be the most widely known animal species to have gone extinct in human history. However, despite its prominence in popular culture, surprisingly little is known of the anatomy and biology of this animal. The dodo was extinct by 1693, less than one hundred years after the discovery and colonization of Mauritius by the Dutch. There is not a single complete specimen that exists from 17th century collections, only a few fragments remain; a single desiccated head, a skull, a beak, and a foot. There are also a few genuine but often contradictory contemporary written accounts and drawings. It was not until the discovery of a mid-Holocene fossil concentration-Lagerstätte on Mauritius in 1865, the Mare aux Songes (MAS), that scientists, most notably Sir Richard Owen, were able to reconstruct the dodo’s skeletal anatomy by constructing composite, partially incomplete skeletons. Surprisingly, only few additions to our knowledge of dodo anatomy, paleoecology and extinction have been made since Owen’s 1866 seminal publication, a vast library of semi-popular works on the dodo notwithstanding.

The fossil discoveries made by barber and amateur naturalist Etienne Thirioux between 1899 and 1910 include some of the best dodo remains existing today, including the only complete skeleton known from a single bird (housed in the Natural History Museum in Port Louis, Mauritius), and another largely complete skeleton (housed in the Durban Natural Science Museum in South Africa). Sadly, Thirioux’s discoveries never received the attention they deserved. Our anatomical atlas of the Thirioux skeletons, produced using modern techniques such as 3D laser surface scanning, opens a new window into the life of this famous extinct bird.

Society of Vertebrate Paleontology Memoir number fifteen is the first complete, comprehensive treatise on dodo skeletal anatomy ever produced and only the third monograph on dodo skeletal anatomy; the last one dating from 150 years ago. It represents years of collaborative efforts from a large team of international scientists, with a substantial contribution from undergraduate student researchers in the 3-D laser surface scanning 3-D of the Thirioux skeletons.