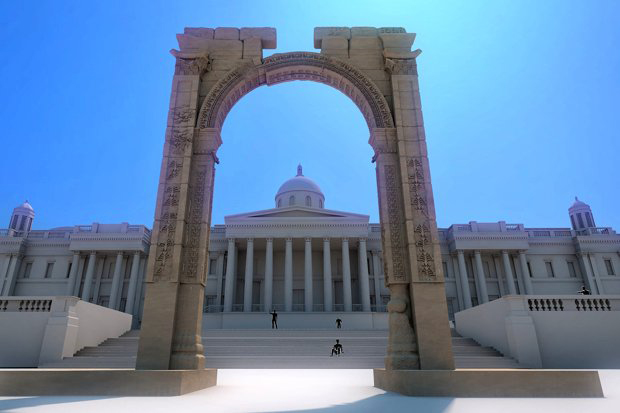 Replica of the Palmyra arch unveiled in London

Ceremony took place on Tuesday at the Trafalgar Square

A replica of the Palmyra Arch, that was destroyed by Islamic State fighters, was unveiled in Trafalgar Square, in London, on Tuesday.

Mayor Boris Johnson of London said that the celebration was “in solidarity with the people of Syria” and “in defiance of the barbarians” who destroyed the original arch.

The replica arch was built in the framework of a project by the Institute of Digital Archaeology, a joint venture between Harvard University the University of Oxford (UK), and Dubai’s Museum of the Future. In 2015, the IDA achieved wide international acclaim, including a cover story in the November 11, 2015 issue of Newsweek, for its Million Image Database program aimed at preserving cultural heritage objects and architecture in the conflict zones of the Middle East.

The ca. 20-foot-tall marble replica (about two-thirds of the size of the original) was created on the basis of a 3-D computer model of the arch. This was built by researchers by compiling dozens of photos taken by archaeologists and tourists in Palmyra before May 2015, when IS militants overran Palmyra.

The replica will stay in London only for a few days. In September it will travel to New York and afterwards to Dubai.