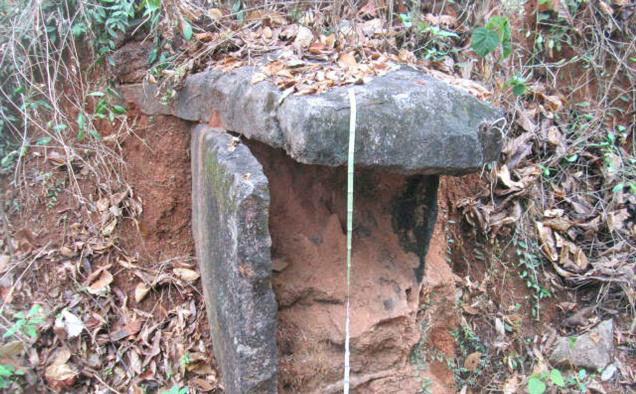 A megalithic burial monument discovered in Malabar, India, has yielded additional evidence of proto-historic habitation of the area. The megalithic cist was found near Kuitheri, in Valayam grama anchayat, in Kozhikode district. It comprises six rocks slabs and is 1.50 metres long, 1.10 metres wide and  the chamber is 1.30 metres deep.

N.K. Ramesh, archaeological- anthropologist, said the orthostats are about 18 cms thick and are placed vertically in a rectangular shape. One of the orthostats, the one on the southern side, is missing.

According to Mr. Ramesh, senior assistant with Museum project, at the Cultural Heritage Department of Thunchathu Ezhuthachan Malayalam University, Tirur, inside the chamber of the cist, which has been filled with red soil, researchers found well-fired black ware pottery pieces

Near the cist archaeologists have also found an urn burial jar with a capstone lid. Unfortunately the urn was partially destroyed during construction works at the site.

The area has offered evidence of various burial practices, illustrating the social stratification of the megalithic people in north Kerala, said Mr. Ramesh. As evidence from previous discoveries by P. Rajendran, archaeologist, at Oliyani near Kunnoni in Kottayam district or in Idukki have shown, the construction of cists in the State has been following a standard methodology.