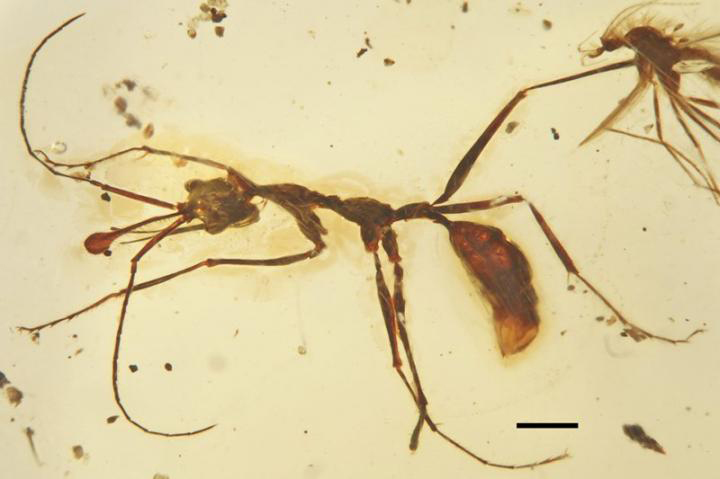 Some of the earliest Formicidae were solitary specialist predators

Ants comprise one lineage of the triumvirate of eusocial insects and experienced their early diversification within the Cretaceous. The success of ants is generally attributed to their remarkable social behavior. Recent studies suggest that the early branching lineages of extant ants formed small colonies of either subterranean or epigeic, solitary specialist predators.

The vast majority of Cretaceous ants belong to stem-group Formicidae and comprise workers and reproductives of largely generalized morphologies, and it is difficult to draw clear conclusions about their ecology, although recent discoveries from the Cretaceous suggest relatively advanced social levels.

Remarkable exceptions to this pattern of generalized morphologies are ants with bizarre mouthparts in which both female castes have modified heads and bladelike mandibles that uniquely move in a horizontal rather than vertical plane. Haidomyrmecines have puzzled evolutionary biologists as to their specific ecology, with the mandibles apparently acting as traps triggered by sensory hairs in a way distinct from that of modern trap-jaw ants.

Not all ants cooperate in social hunting, however, and some of the most effective predatory ants are solitary hunters with powerful trap jaws. Models of early ant evolution predict that the first ants were solitary specialist predators, but discoveries of Cretaceous fossils suggest group recruitment and socially advanced behavior among stem-group ants.

Dr. Wang Bo of the Nanjing Institute of Geology and Palaeontology, Chinese Academy of Sciences and his colleagues describe a new bizarre ant, Ceratomyrmex ellenbergeri, from 99 million-year-old Burmese amber that displays a prominent cephalic horn and oversized, scythelike mandibles that extend high above the head. These structures presumably functioned as a highly specialized trap for large-bodied prey. The horn results from an extreme modification of the clypeus hitherto unseen among living and extinct ants, which demonstrates the presence of an exaggerated trap-jaw morphogenesis early among stem-group ants.

Together with other Cretaceous haidomyrmecine ants, the new fossil suggests that at least some of the earliest Formicidae were solitary specialist predators. In addition, it demonstrates that soon after the advent of ant societies in the Early Cretaceous, at least one lineage, the Haidomyrmecini, became adept at prey capture, independently arriving at morphological specializations that would be lost for millions of years after their disappearance near the close of the Mesozoic. The exaggerated condition in the new fossil reveals a proficiency for carriage of large-bodied prey to the exclusion of smaller, presumably easier-to-subdue prey, and highlights a more complex and diversified suite of ecological traits for the earliest ants.