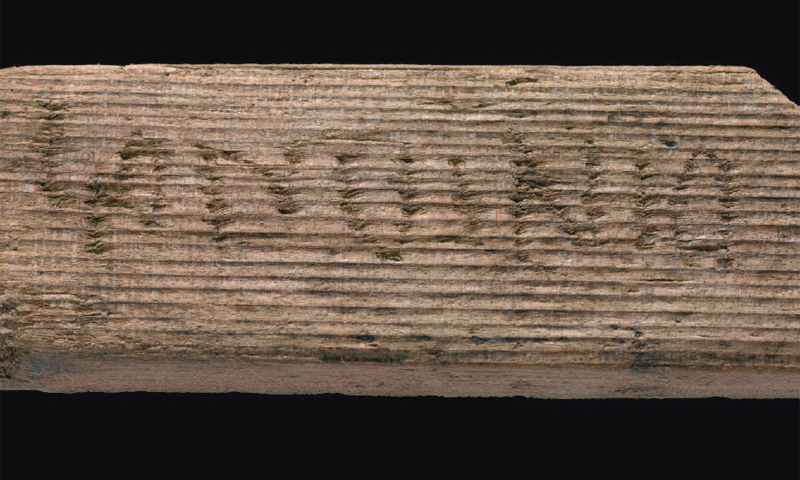 Archaeologists from MOLA have published research into Britain’s largest, earliest and most significant collection of Roman waxed writing tablets. The collection, which boasts the first hand-written document known from Britain, was discovered during archaeological excavations for Bloomberg’s new European headquarters, in London.

Romans all over the Empire used waxed writing tablets like paper, for note-taking and accounts, for correspondence and for legal documents. Previously only 19 legible tablets were known from London. Of the 405 from Bloomberg, over 80 have been deciphered, more than quadrupling that number and providing an incredibly rare and personal insight into the first decades of Roman rule in Britain.

In the words of the people who lived, worked, traded with and administered Roman London, the Bloomberg tablets reveal the names, events, workings and organisation of the new city. One tablet features the earliest ever reference to London, preceding Tacitus’ citing of London in his Annals by 50 years.

Michael Bloomberg, Founder of Bloomberg LP and Bloomberg Philanthropies, said: “As steward of this ancient site and artefacts, Bloomberg has embraced the City of London’s rich heritage. And as a company that is centered on communications –of data, information, news, and analysis– we are thrilled that Bloomberg has been at the core of a project that has provided so much new information about London’s first half-century.”

Highlights from the Bloomberg writing tablet collection include:

-A tablet archaeologically dated to AD 43-53, the first decade of Roman rule in Britain;

-Evidence of someone practicing writing the alphabet and numerals, perhaps the first evidence for a school in Britain;

New evidence for Julius Classicus, a figure later known to history as a leader of the Batavian revolt, revealed to be the prefect of the Sixth Cohort of Nervians in the first decades of Roman London;

A contract from 21 October AD 62 to bring ‘twenty loads of provisions’ from Verulamium to London by 13 November, a year after the Boudican Revolt, the tablet reveals precious details of the rapid recovery of Roman London;

The names of nearly 100 people, from a cooper, brewer and judge, to soldiers, slaves and freedmen. The names reveal early London was inhabited by businessmen and soldiers, most likely from Gaul and the Rhineland.

Made of wood, recesses in the rectangular tablets were originally filled with blackened beeswax, with text inscribed into the wax with styluses. Although the wax hasn’t survived, the writing occasionally went through the wax to mark the wood. As tablets were reused, in some cases several layers of text built up on the tablets, making them particularly challenging to decode.

Classicist and cursive Latin expert, Dr Roger Tomlin, deciphered and interpreted the tablets. Alongside photography with raking light and microscopic analysis, Roger used his encyclopaedic knowledge of Roman Britain and extensive experience of reading and reconstructing Roman incised texts from their fragmentary remains.

The preservation of the tablets is in itself remarkable, as wood rarely survives when buried in the ground. The wet mud of the Walbrook, a river that dominated the area in the Roman period but is now buried, stopped oxygen from decaying the wooden tablets, preserving them in excellent condition.

Once excavated, the fragile tablets were kept in water before MOLA conservators carefully cleaned them and, using a waxy substance, PEG, which replaced some of the water content, treated them before they were freeze-dried.

Over 700 artefacts from the Bloomberg excavation will be displayed in a public exhibition space that will sit within the new Bloomberg building, including the earliest-dated writing tablet from Britain. The London Mithraeum exhibition opens in autumn 2017.