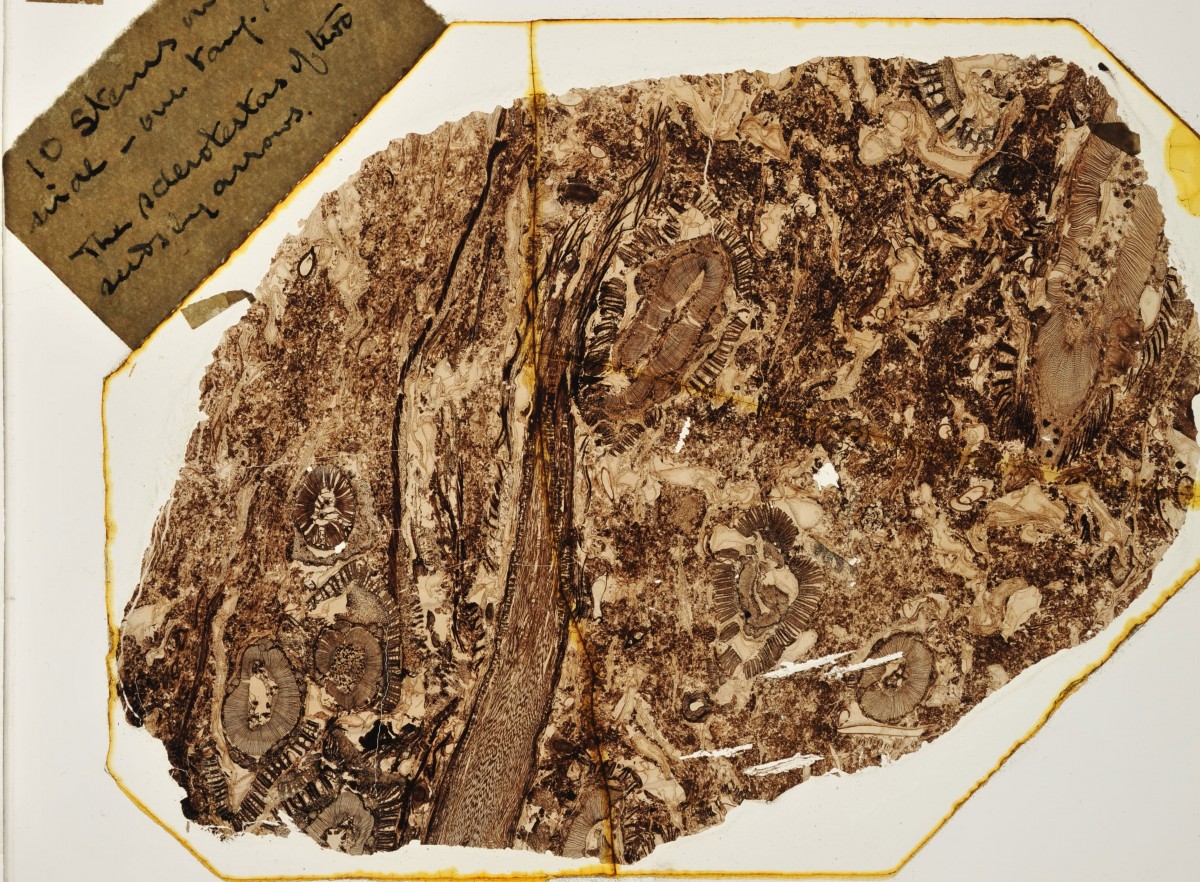 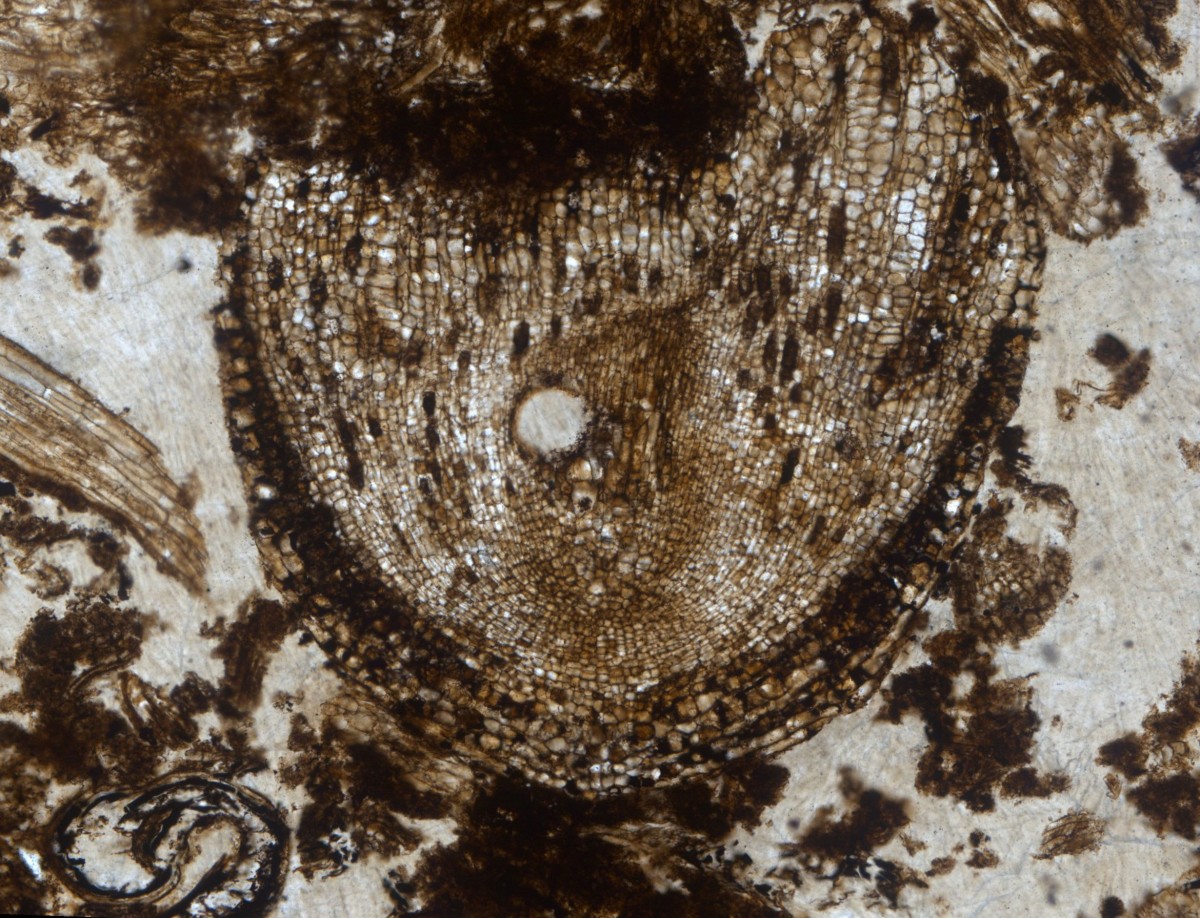 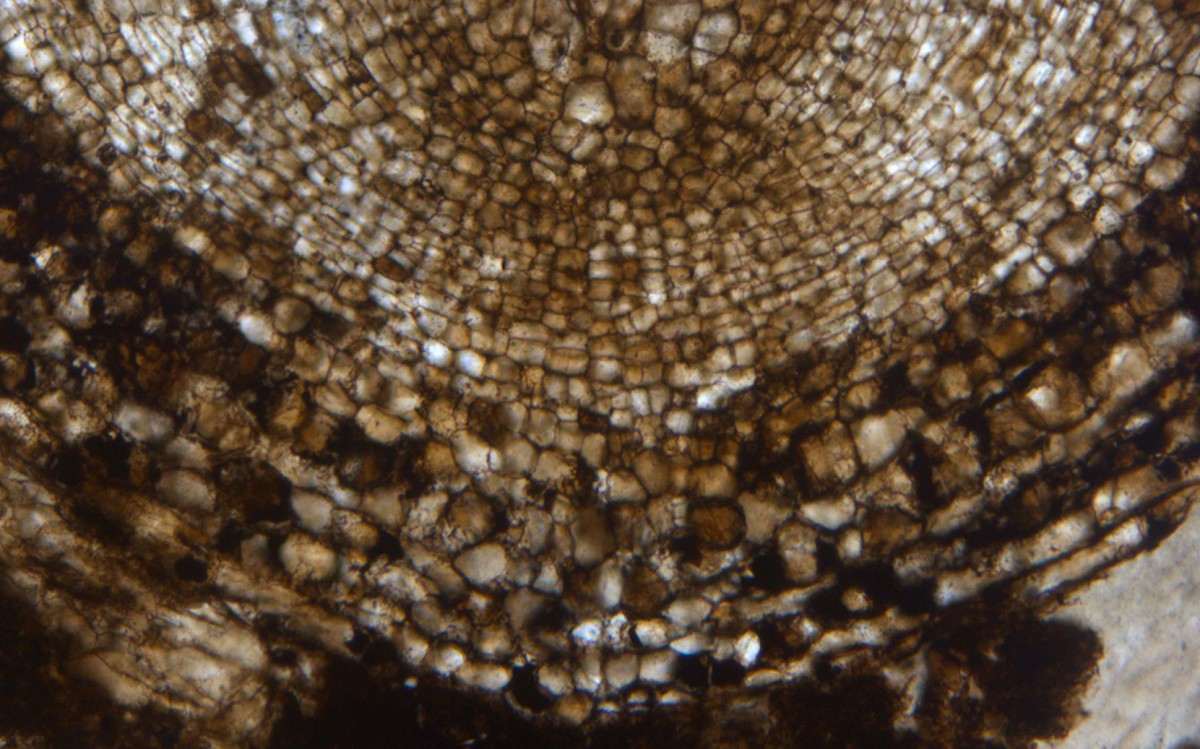 Scientists at Oxford University have discovered the oldest known population of plant root stem cells in a 320 million-year-old fossil. The cells, which gave rise to the roots of an ancient plant, were found in a fossilised root tip held in the Oxford University Herbaria.

Now the research has revealed the oldest plant root stem cells identified to date. It is also the first time an actively growing fossilised root has been discovered – in effect, an ancient plant frozen in time.
The discovery was made by Oxford Plant Sciences PhD student Alexander (Sandy) Hetherington, during the course of his research. While he was examining one of the fossilised soil slides held at the University Herbaria, he noticed a structure similar to the living root tips we see in plants today. He then realised that he had discovered a population of 320 million-year-old plant stem cells preserved as they were growing, a unique discovery. The stems are different to those living today with a pattern of cell division that remained unknown until now, allowing scientists to assume that some mechanisms controlling root formation are now extinct and were more diverse than previously thought.

These roots were important because they comprised the rooting structures of the plants growing in the Earth’s first global tropical wetland forests with tall trees over 50m in height and were in part responsible for one of the most dramatic climate change events in history. The evolution of deep rooting systems increased the rate of chemical weathering of silicate minerals in rocks – a chemical reaction that pulled CO2 out of the atmosphere, leading to the cooling of the Earth and thus one of the planet’s great ice ages.

The fossils studied during this research are the remains of the soil from the first giant tropical rainforests on Earth. The rock in which the soil is preserved formed in the Carboniferous swamps that gave rise to the coal sources spanning what is now Appalachia to central Europe, including the coal fields in Wales, northern England and Scotland.

The roots found are preserved in coal balls, concretions perminieralised by calcite. They are from the Carboniferous period, from the coal measures in the north-west of England which drove the the industrial revolution.

Alexander Hetherington, named the stem cell fossil Radix carbonica (Latin for ‘coal root’). He said that ‘it gives us a unique window into how roots developed hundreds of millions of years ago’.

Professor Liam Dolan, Head of the Department of Plant Sciences at Oxford University and senior author of the paper, said that ‘it is startling that something so small could have had such a dramatic effect on the Earth’s climate’.

The study is published in the journal Current Biology.