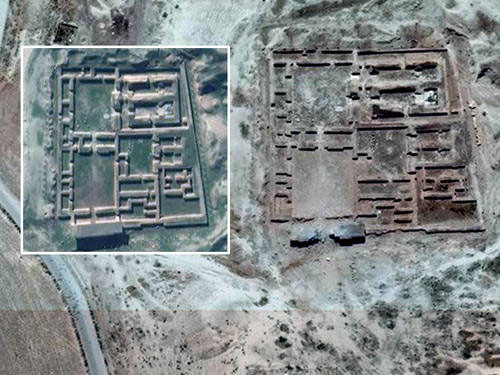 Temple of Nabu partly destroyed by IS

With the use of explosives

Unesco and prominent archaeologist condemn the destruction of the Temple of Nabu in northern Iraq by the Islamic State. The Temple of Nabu, in the Assyrian city of Nimrud, was partly blown up by the IS, which released  video footage of the explosion as part of its propaganda campaign.

The video shows explosives detonated at the entrance arch, which collapsed, leaving, however, the majority of the structure still standing.

In the same video, a bulldozer is shown demolishing the Mashki Gate in Nineveh, a seventh-century monument near Mosul.

The United Nations training and research agency, Unitar, has compared satellite images taken on 3 June to imagery from 12 January this year confirming the damage. In particular, the agency announced that the main entrance of Nabu Temple is extensively damaged. The destruction of the site has also been confirmed by the authorities.

The temple was dedicated to Nabu, the Babylonian god of wisdom. The main building was built in the ninth century, while the gate and walls were built centuries later. According to Colin Renfrew, archaeologist at the University of Cambridge and member of the House of Lords, the IS do not know the difference between modern reconstructions and ancient remains.

Irina Bokova, director-general of Unesco condemned the temple’s destruction, adding that “Extremists cannot silence history and their attempt to erase the memory of this region can only fail. The deliberate destruction of heritage is a war crime and must be punished as such”.