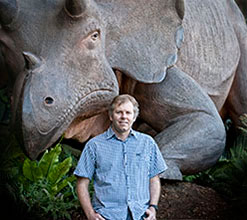 There was no space before that

Humans’ early mammal relatives likely diversified 66 million years ago, after the extinction of dinosaurs opened up space for animals such as big cats, horses, elephants and eventually apes to evolve.

In a paper published in the journal Systematic Biology and delivered at the Society for Molecular Biology and Evolution Conference this week, Dr Phillips said biases in models of DNA evolution inflated estimates of when modern mammals, which were once no larger than a guinea pig, diversified and evolved into the animals familiar to us today.

“We can infer that some placental mammals did co-exist with dinosaurs,” he said.

“But for 20 years or so the current dominant theory has suggested that their diversification happened more than 80 million years ago, well before dinosaurs became extinct.

“It now appears that the major diversification of placental mammals closely followed the extinction of dinosaurs 66 million years ago, an event that would have opened up ecological space for mammals to evolve into.”

Dr Phillips said that for molecular dating to work, scientists had to calibrate the rate of DNA evolution with fossils of known age.

“I re-examined fossil calibrations, excluding those that were contentious or based on poorly resolved fossil placements and also fossil calibrations from within groups of very large or long-lived mammals, such as whales, for which parallel changes in the rate of DNA evolution in different lineages could distort dating estimates.

“When I took the remaining set of calibrations, the major diversification of placental mammals coincided with the extinction of dinosaurs,” Dr Phillips said.

“Fossil records have long indicated that the ancestors of many modern placental mammal groups can be traced back to the period immediately following the dinosaur extinction.

“But many scientists focused on DNA sequencing have brushed aside aspects of the fossil data, but when you minimise the potential biases in molecular dating you instead get a story that matches the fossil evidence.”

Dr Phillips is presenting these findings at the Society for Molecular Biology and Evolution Conference this week.