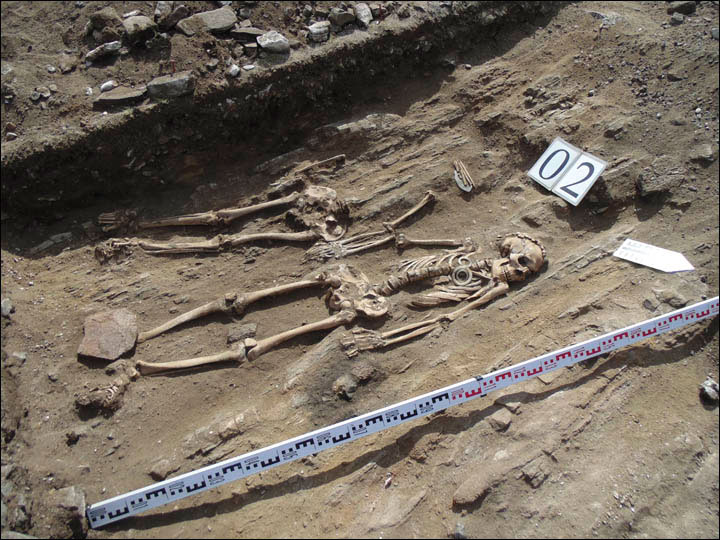 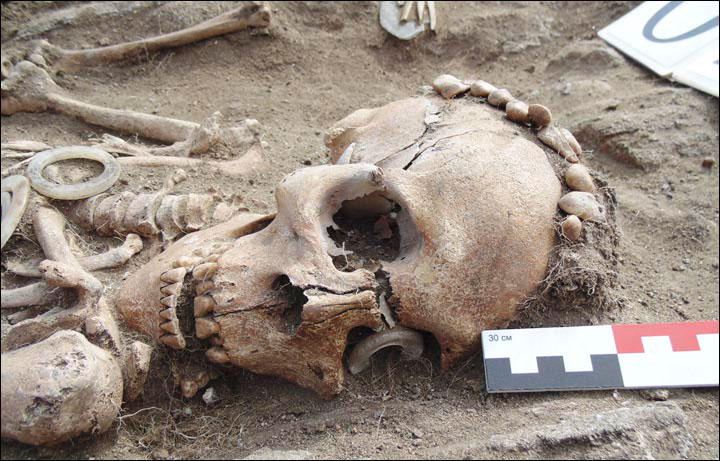 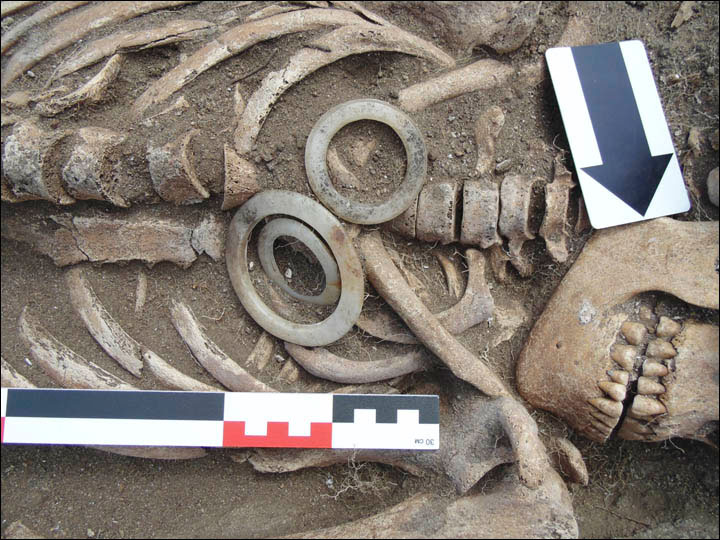 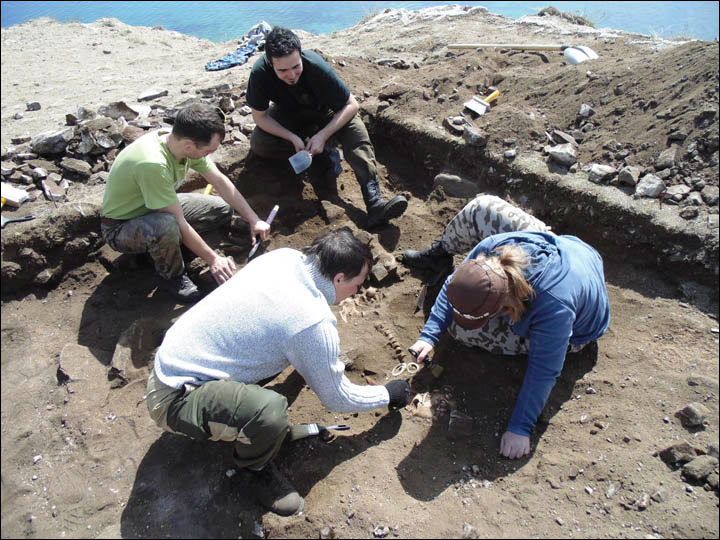 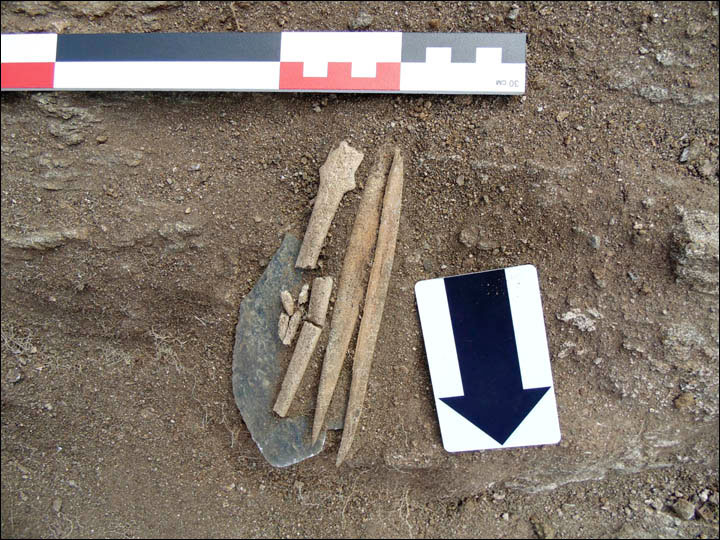 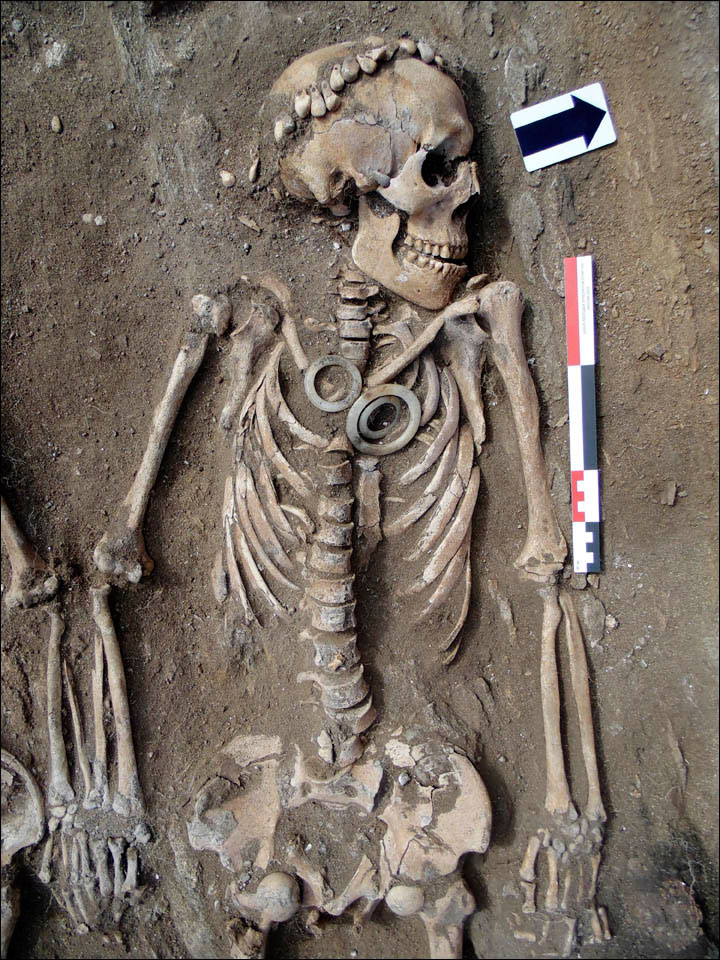 Along with various artefacts

A Bronze Age burial with two skeletons holding hands as well as with implements and decorations has been discovered near Lake Baikal.

The couple are thought to be from the Bronze Age Glazkov culture. One skeleton is of an elderly man and the other of a woman, although their relationship is not clear to archaeologists. Both skeletons were found lying on their backs with the heads turned to the west. They had been placed in the grave hand in hand.

The man’s skeleton, which is at a very good condition, had a ring of rare white jade over one eye socket, and three more on his chest. On the skull and around the feet there were pendants of red deer and musk deer teeth, probably decorating the hat and footwear the man was wearing. Some metal implement was also found in a small leather bag, between his kneecaps. The upper part of the woman’s skeleton was destroyed by rodents, but near her a large jade knife was found, about 13 cm long and 7cm wide. Analysis on the finds will begin in autumn.

Archaeologist Dr Dmitry Kichigin said that perhaps the decorations and the burial were connected with ideas about the afterlife. He also said that a DNA analysis could yield more valuable information, but it is rather expensive. Samples of the bones have been sent to Canada for radiocarbon analysis, but experts believe that the couple is about 4,500-5,000 years old.

The burial was found at site which was apparently a sacred place for ancient people, since it was not a settlement but was rather used for religious rites and occasionally as a graveyard. It is located at a cape on Maloe More, about 260 kilometres northeast of Irkutsk. However, the precise location has not been announced so that the site will be protected from amateur diggers.

The archaeological team led by Dr Kichigan is from Irkutsk National Research Technical University, with the assistance of Yuliana Yemelyanova, from the  Laboratory of Archeology, Paleoecology, and Life Support Systems of the Peoples of North Asia. Works at the site will resume next year.