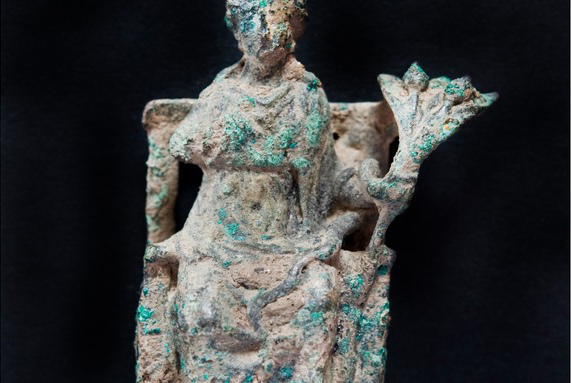 By volunteers at the Arbeia Roman Fort

A beautifully crafted miniature bronze figure of the Roman goddess Ceres was found by volunteers from the WallQuest community archaeology project and the Earthwatch Institute at Arbeia Roman Fort, South Shields.

The artifact thought to be a mount from a larger piece of furniture. Ceres was the goddess of agriculture, grain and fertility which is a highly appropriate goddess for Arbeia because it was a supply base where thousands of tons of grain were stored in granaries to feed the army stationed along Hadrian’s Wall.

This is the second goddess that the WallQuest project has found at Arbeia in two years. In 2014, a local volunteer found a carved stone head of a protective goddess, ortutela.

Amanda Seim, the Earthwatch volunteer who found the Ceres figure, explained the moment she found the figurine: “At first I didn’t believe the goddess was real since the condition seemed pristine and the detail was incredible, but then our site supervisor fell eerily-quiet triggering a hum of authentic excitement.”

Councillor Alan Kerr, Deputy Leader of South Tyneside Council with responsibility for Culture and Leisure, said: “This is a marvellous discovery for South Tyneside.

“It is brilliant that discoveries such as this are still being made at Arbeia. Thousands of years after the site was used to support the army stationed along Hadrian’s Wall. They are the pieces that help to build a picture of the Borough’s rich Roman history.

“We would encourage people to take the opportunity over the summer holidays to pay a visit to Arbeia to see the bronze figure and learn about its origins and about the Roman goddess Ceres.”

Geoff Woodward, Museum Manager, said: “This is a really exciting and fitting discovery for us at Arbeia Roman Fort. I hope younger visitors in particular will be inspired to visit and join us for our summer school archaeology days.”

Visitors to Arbeia this summer will be able to see both of these newly discovered goddesses on display in the site Museum. The excavations, which are taking place just outside the south-west corner of the fort, can be viewed by visitors and will continue until September.