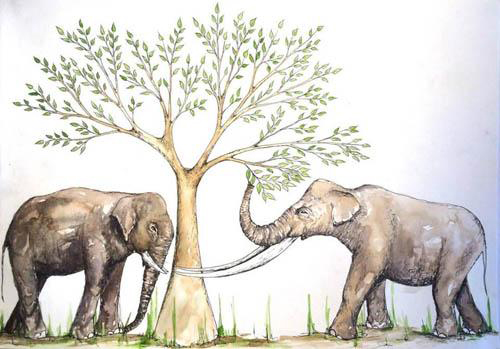 By analysis of the fossil record in China

In recent years, geochronologically well-constrained fossil mammal faunas with strong temporal continuity, spanning out the entire Pleistocene, have been uncovered from the karst caves and fissures in Chongzuo, Guangxi of southern China. The considerable proboscidean presence in these assemblages has corroborated the division of key Pleistocene faunal stages in South China: the Early Pleistocene Gigantopithecus-Sinomastodon fauna, the Middle Pleistocene Ailuropoda-Stegodon fauna and the Late Pleistocene Elephas fauna. This holds important implications for understanding how climactic perturbations drive mammal evolution.

Recently, a Sino-British team of palaeontologists explored the feeding ecology of these Chinese proboscideans from different Pleistocene stages, using cutting-edge 3D dental microwear texture analysis (DMTA), which offers greater quantitative robustness and repeatability during data collection and processing. By comparing the complexity and anisotropy of molar wear texture from Sinomastodon, Stegodon and Elephas, the team inferred that Sinomastodon (Early Pleistocene) and Stegodon (present throughout the Pleistocene) were obligate browsers of foliages, statistically distinct from Elephas which shows a much broader diet of grasses and trees.

The results suggest a more complex process of Pleistocene faunal turnovers in South China. Rather than a unidirectional trend of climate driven environmental deterioration, biotic factors might have played a more substantial role than previously thought.

Recent research suggests that Sinomastodon and Stegodon coexisted over vast areas of East Asia for 7 million years. Throughout this period, Sinomastodon retained the primitive bunolophosont dental morphology which consists of blunt, conical cusps; on the other hand, Stegodon evolved highly lophodont molars with numerous enamel ridges, thought to enhance the mechanical efficiency of chewing vegetation. By the end of the Early Pleistocene, some one million years ago, a major vegetational and faunal turnover event took place in Guangxi. The bio-event is characterised by the disappearance of tropical forests and the Tertiary relict mammal taxa which inhabited them (including Sinomastodon).

The study proposes that the greater masticatory efficiency of Stegodon gave it a competitive edge over its browsing competitor, Sinomastodon, eventually causing Sinomastodon‘s extinction in China. By contrast, the dietary differences between Stegodon and Elephas created niche partitioning, which allowed both genera to coexist in South China from the Middle Pleistocene right up to the very end-Pleistocene, at which point Stegodon became extinct alongside a very large cohort of the world’s large mammal species. Elephas survived into historical times in large parts of South China, in the form of the modern Asian elephant.

This study was published online July 26 in the Journal of Quaternary International.