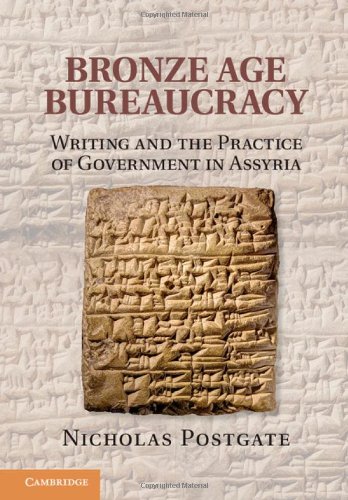 Bronze Age Bureaucracy: Writing and the Practice of Government in Assyria

This book describes ten different government archives of cuneiform tablets from Assyria, using them to analyse the social and economic character of the Middle Assyrian state, as well as the roles and practices of writing. The tablets, many of which have not been edited or translated, were excavated at the capital, Assur, and in the provinces, and they give vivid details to illuminate issues such as offerings to the national shrine, the economy and political role of elite households, palace etiquette, and state-run agriculture.

This book concentrates particularly on how the Assyrian use of written documentation affected the nature and ethos of government, and compares this to contemporary practices in other palatial administrations at Nuzi, Alalah, Ugarit, and in Greece.

Nicholas Postgate was Professor of Assyriology at the University of Cambridge from 1994 to 2013 and Fellow of Trinity College. He directed excavations at the Sumerian city at Abu Salabikh in South Iraq from 1973 to 1989, and at the Bronze and Iron Age settlement at Kilise Tepe in South Turkey from 1994 to 2012. His articles have been published in Iraq, Revue d’Assyriologie, the Journal of Cuneiform Studies, the Journal of the Economic and Social History of the Orient, Sumer, and Anatolian Studies. He is author of Early Mesopotamia: Society and Economy at the Dawn of History, editor of several volumes of Assyrian documents, and co-editor of A Concise Dictionary of Akkadian.