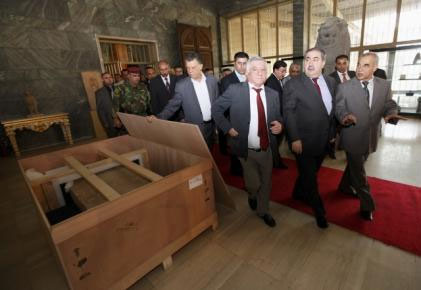 From Niniveh to Baghdad via Geneva

Two stone slabs dating back to the Assyrian period around 650 BC have been returned to Iraq, 17 years after they were stolen, Iraqi officials said on Thursday.

The slabs bear the images of Assyrian kings waving to their subjects, officials said. Together they weigh as much as a small family car.

The slabs were found in the ruins of Assyrian palaces in northern Nineveh province but disappeared in 1994 along with some 15,000 relics looted during dictator Saddam Hussein’s reign and the chaos after the 2003 U.S.-led invasion that ousted him.

Many of the artefacts were stolen from Baghdad’s National Museum but thousands of other pieces were taken from some 10,000 poorly guarded archaeological sites around the country.

Iraq lies in the heart of a region many call the cradle of civilization, where Assyria, Babylonia and Sumer are among cultures and empires that have risen and fallen over millennia.

In 2004, the Swiss government informed Iraq that the two stolen slabs had been purchased by a Swiss dealer who wanted to give them back to Iraq, officials said.

“The two artefacts were delivered by a Swiss citizen to the Iraqi embassy in Geneva in 2007 and were kept in the house of a former Iraqi ambassador,” Iraqi Foreign Minister Hoshiyar Zebari said at a news conference at National Museum, where the slabs will be put on display.

In recent years the Iraqi government has slowly reassembled some of the country’s lost history.

Last September officials announced the recovery of the headless statue of a Sumerian king and more than 500 other pieces. Two weeks later the National Museum found 600 missing items stashed in a storeroom of the prime minister’s office.

In December 2008, Iraqi authorities seized 228 artefacts that smugglers planned to take out of the country.

“There are still more than 10,000 artefacts missing,” said Muhsin Hassan, head of the Iraqi National Museum, during a ceremony to open the boxes containing the relics.

“The Iraqi government is seeking, in every way possible to recover them. We have published details of the stolen artefacts around the world.”