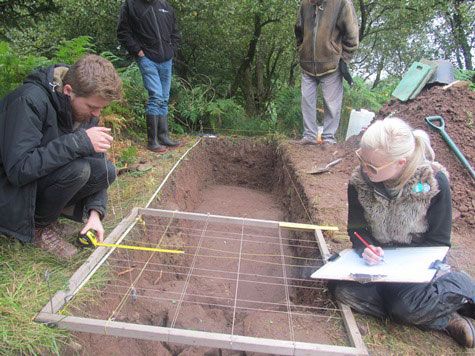 The “most important Neolithic cup and ring marked rock art panel in Europe” is being unearthed for the first time in 50 years on the edge of a housing estate in Clydebank near Glasgow.‌‌

The Cochno Stone, dating back to 3000BC, and one of the best examples of Neolithic or Bronze Age cup and ring markings in Europe, is being fully excavated for the first time since it was buried in 1965 to protect it from vandalism.

The stone, which lies on land next to a housing estate near Faifley, in West Dunbartonshire, is regarded as one of the UK’s most important, but also one of its most neglected, prehistoric sites.

The excavation will provide the opportunity to use cutting-edge 3D imaging technology to make a detailed digital record of the site, which should shine more light on the stone’s history, its purpose and the people who created the artwork around 5,000 years ago.

Dr Kenny Brophy, from the University of Glasgow who specialises in urban archaeology, is leading the excavation at the site next to Cochno Farm.

He said: “This is the biggest and I would argue one of the most important Neolithic art panels in Europe. The cup and ring marks are extensive but the site just happens to be in the middle of an urban housing scheme in Clydebank.

“It was last fully open to the elements and the public up until 1965. Sadly as it was neglected it was also being damaged through vandalism and people traipsing all over it. So renowned archaeologist Ludovic Maclellan Mann, with a team of experts, decided the best way to preserve it was to cover it over to protect it from further damage. And it has lain there ever since.

“It has been well recorded for archaeological purposes but we now feel the time, and the technology, is right to unearth it and see what new elements we can learn about its history and the people who created it. The local community is very engaged in what we plan to do, and they seem very proud to have this amazing prehistoric gem right on their door step.”